SEATTLE --  The Fisheries Division of the National Oceanic and Atmospheric Administration wants input from citizens about a proposed 'whale protection zone' along the west side of San Juan Island.

"Unfortunately, our conclusion is that they are still at risk of extinction," says Lynne Barre of NOAA. She's the specialist tasked with the difficult job of helping boost the population of our resident southern orca population. What numbered near 100 in the mid 90s, now has fallen 20 percent in 20 years. The population now stands at only 78.  "They need to be protected as endangered species."

The protection zone would go from Mitchell Point down to the southernmost end of the island at Cattle Point.

"The time to act is now," says Scott West with Orca Relief.

He spent two decades as an enforcement officer for the EPA and was drawn to this cause because of the beauty and iconic nature of the Southern Resident killer whale as a symbol of the Pacific Northwest.

"We can't do it yesterday, but we can do it today," he says, overlooking Puget Sound from the Bell Street overlook in downtown Seattle. 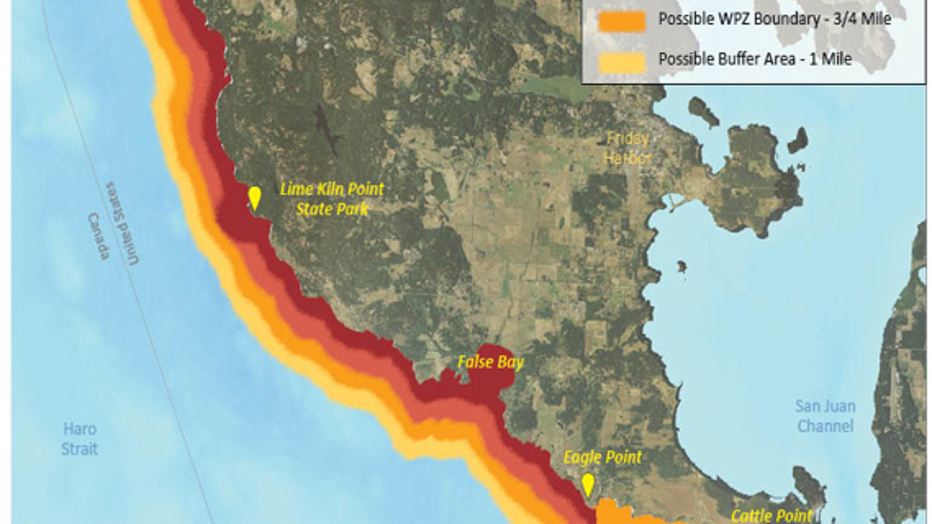 Orca Relief Citizens Alliance is leading the charge to get a whale protection zone implemented off the west side of San Juan Island—extending three-quarter miles offshore with an extra quarter-mile buffer zone.

He says it would keep whale watching boats, commercial and private craft away. Federal reports say these boats can disrupt feeding, navigation and communication in these endangered whales.

"These animals are followed and harassed from sun up to sundown," says West "Particularly during the summer—and they just can’t get away. By establishing a whale protection zone, (it) would then give them a refuge."

But others say that's not the best path to save our whales. The other big issues documented in NOAA reports are that polluted waters and lack of food also threaten the species.

"What you need to have is a restoration of the fisheries," says Michael Harris of Orca Conservancy. "You just need to get salmon in the water."

Harris used to run the Pacific Whale Watch Association as executive director. Harris and other groups like the Center for Whale Research say the proposed area off San Juan Island is no longer a feeding ground—and what little salmon are left in our region just aren’t there anymore.

"There needs to be strong criteria for establishing marine protected areas, " says Harris. "They need to be identified as feeding hot spots, they need to help. You can’t have conservation measures that are largely based on optics."

But the Orca Citizens Relief Alliance and their partners say we need to act now. Solving pollution and restoring populations could take decades, but this protection zone could be implemented right away. Harris disagrees, saying this is a complicated matter.

"We have co-managers of the fisheries by law and those are the treaty tribes of Washington state—and they need to be on board for this and I’m not sure they are."

For West and the Orca Relief Citizens' Alliance, they want to get the things going before it's too late for this iconic mammal that's lived in Puget Sound and Salish Sea waters for tens of thousands of years.

"The resident orcas are in dire situation right now. It’s going to require immediate and drastic action to save these animals from extinction."

The proposed whale protection zone is just one part of NOAA's comprehensive plant to help boost the southern resident orca population, but Lynne Barre with NOAA Fisheries says they want to hear from all sides.

"We do a full analysis on both the animals and the human part of that decision. So that’s a lot of the type of information we’re asking from the public to help us with."

If you'd like to give input to NOAA, check out this link: https://www.regulations.gov/docket?D=NOAA-NMFS-2016-0152 Comments are due April 13th.