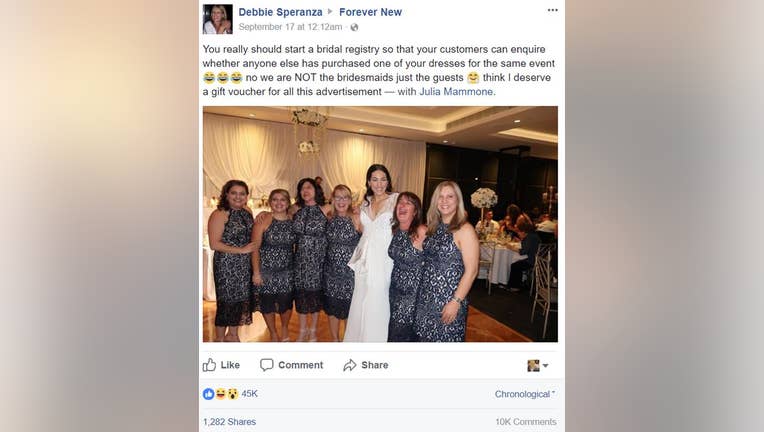 SYDNEY – Debbie Speranza was surprised when she met up with her cousin at a Sydney wedding reception recently and they were wearing the same dress.

But both women were even more surprised when they kept bumping into other women also in the same dress—a total of six women at the Australian wedding, which was attended by about 200 people total, showed up in the A$160 (about $128 USD) dress from Forever New.

"No we are NOT the bridesmaids just the guests," Speranza wrote on the brand's Facebook page alongside a picture of the six women with the bride, Julia Mammone. She did dub the group #backupbridesmaids when the post went viral on social media, the BBC reports.

"A couple of the women were a little bit 'ahhhhh' but then we all saw the fun in it." She adds, "It wasn't a setup, I swear. I only knew one of the six women. Three were from the bride's side and three from the groom." The six women and Mammone are scheduled to appear on an Australian morning show Wednesday to discuss the viral incident.