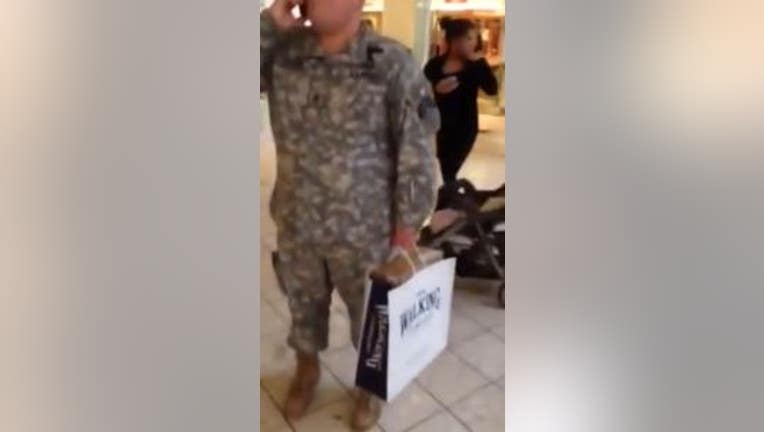 LANGHORNE, Pennsylvania – Video of a veteran confronting another man in uniform at a mall and accusing him of impersonating a soldier has been seen by more than 2.7-million people in just a few days.

Now officials at Joint Base Lewis-McChord confirm to Q13 FOX News that they have no record that uniformed man ever served at the base as he claimed on camera.

In the video the veteran, former Infantryman Ryan Berk, approaches the man who is seen carrying a shopping bag at a Pennsylvania mall and begins questioning him about his service.

The conversation quickly escalates as the man seems unable to adequately answer basic questions about where he served, when, his uniform and even where he received training.

At one point he says he literally just got home.

“From where?” asks Berk.

“From Fort Lewis,” the man replies.

“Fort Lewis, is that where the Rangers are?” asks Berk.

JBLM officials told Q13 FOX News reporter Jeff Van Sant that they have no record the man ever served at the base.

At the end of the video the man can be seen taking a phone call and trying to walk away. But Berk follows after him and accuses him of being an imposter.

“You are a phony, I just called you out on about 10 different things,” says Berk to the man. “What you are doing right now is illegal.”

“I’ve got 12 years in,” the man says before finally walking away.

WPVI-TV in Philadelphia reported that they tracked the man in uniform to a house in that city, but no one would come to the door.

Public records indicate an individual by the same name faced a prior charge in 2003 of impersonating a public servant.

Guardian of Valor, an organization devoted to finding and exposing soldier imposters, first posted the video on YouTube November 28th

“U.S. Rep. Mike Fitzpatrick of Pennsylvania also saw the video, and has ordered the U.S. Attorney’s office to look into the situation for possible prosecution under the Stolen Valor act of 2013,” wrote the organization on its website.

The man featured in the video has not yet been charged with a crime so we are not naming him.

Q13 Fox News spoke with some local veterans who say the man should be ashamed.  One Navy veteran Eric Gramonte, says the man uniform looks fake.  "We sacrifice our lives just to wear that uniform proudly and he just thinks he can just wear it just for fun to get discounts..its not right," Gramonte said.

An army veteran, Victor Macedo served two tours in Afghanistan and says the situation is pathetic.

"Knowing that some people actually have to put the uniform on and serve their country and actually die in that uniform..for someone willing to put on that uniform and just pretend..thats just sad that someone would try to use that for..you know..trying to get discounts," Macedo said.