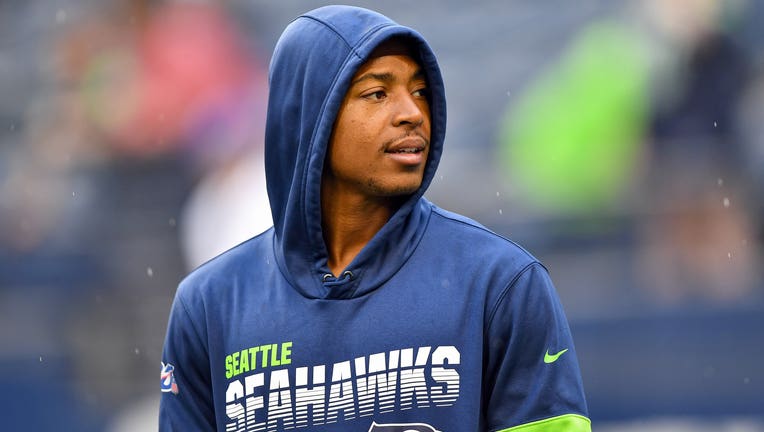 SEATTLE, WASHINGTON - AUGUST 29: Tyler Lockett #16 of the Seattle Seahawks looks on before the preseason game against the Oakland Raiders at CenturyLink Field on August 29, 2019 in Seattle, Washington. (Photo by Alika Jenner/Getty Images)

For several NFL stars, speaking out against social injustice meant speaking to youngsters about racism.

Chiefs tight end Travis Kelce, Titans running back Derrick Henry, Seahawks receiver Tyler Lockett and Ravens defensive end Calais Campbell each spent time during the season chatting with students about a film that focuses on social and emotional effects of racism against Black men and boys.

The documentary titled "Black Boys" was executive produced by Saints safety Malcolm Jenkins. The players, through a partnership with Old Spice, joined students in virtual class discussions about the film’s exploration identity, opportunity and equity in America.

"It is just a beautiful way to get people to start to discuss the matters that are at hand socially in this world," Kelce said. "I think it’s my job as a white man to be able to step up and say, ‘Listen, something is wrong here. How we are viewing the African-American people is wrong. How we’re treating African-American people is wrong.’ And, there needs to be something that’s done about that."

Kelce, the only white player among the group, encouraged more people to talk openly about stopping racism.

"It’s important for me because of my upbringing, the people around me that I love, that I cherish as friends, as family, people of color," he said. "And it’s been something that I’ve seen as a kid. And it’s very upsetting."

Jenkins, who has been on the front lines fighting for social justice and racial equality for years, focused part of his discussion with students at St. Augustine High School in New Orleans around the importance of mental health.

"We’re using the film ‘Black Boys’ to really create some more dialogue among Black boys and be able to create spaces where they can feel comfortable in their own skin," Jenkins said. "We had some conversation around what they took out of it, what are some things that resonated. And to hear these young men talk about the importance of mental health and talk about the psychological kind of effects that it has on them or how it makes them feel when they walk into a space and can tell that people are afraid of them without even knowing who they are, what they’re about.

"The biggest thing is we need to be able to encourage Black boys to see themselves as more than just athletes and entertainers, see themselves more than what they can do with their bodies but what can they do with their minds. What can they do with their creativity and showing them that it is OK to be emotional, it is OK to laugh, to cry, to feel just as much as human as anybody else, and to encourage them to boldly walk in that regardless of what the world or society might tell them."

Students said they appreciated Jenkins’ willingness to discuss difficult topics and his transparency regarding issues that have impacted him.

"Often, no one ever wants to speak about unpleasant truths knowing many of us have had similar experiences," sophomore Malcolm Ferrouillet said. "It was great to see him open up to us about it."

"I’m a strong advocate of educating our youth and making sure that we invest into our future," Campbell said. "It’s very important to me just being able to build confidence in the Black community among our young boys or who are struggling, fighting and dealing with all the oppression and different things. ‘Black Boys’ is an incredible film that just gives you authentic realization of how things are in America for young Black boys. And just what we what they need to be able to flourish in and be able to reach their goals."

"We need to come together as one and let no one fear our opportunities," he said.