NFL Commissioner Roger Goodell apologized for not listening to NFL players who had previously protested and spoken out against racial injustice in the country.

NFL Commissioner Roger Goodell said that he wishes the NFL had “listened earlier” to the message Colin Kaepernick was trying to convey in 2016 when he started kneeling during the national anthem.

“I wish we had listened earlier, Kaep, to what you were kneeling about and what you were trying to bring attention to,” Goodell said in a conversation with former NFL player and Fox Sports 1 analyst Emmanuel Acho.

“We had invited him in several times to have the conversation, to have the dialogue I wish we had the benefit of that. We never did. You know, we would have benefited from that. Absolutely,” Goodell added. 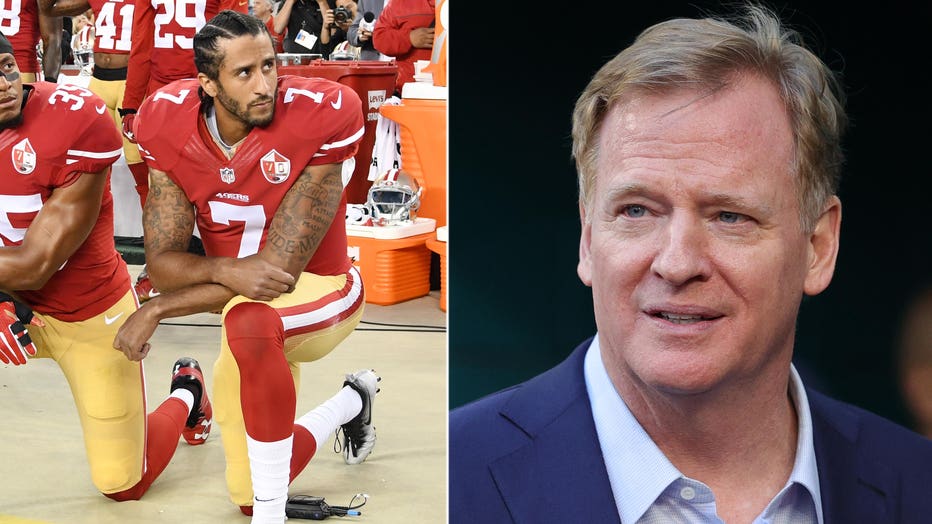 Colin Kaepernick of the San Francisco 49ers kneels in protest during the national anthem prior to playing the Los Angeles Rams in their NFL game at Levi's Stadium on Sept. 12, 2016 in Santa Clara, California, alongside an image of NFL Commissioner Ro

Kaepernick began kneeling during the playing of “The Star Spangled Banner" before games to protest social injustice and police brutality.  The former San Francisco quarterback, as well as other players who joined, faced intense backlash.

“It’s not always easy to know what’s right. But when you do know what's right, you have to have the courage to do it,” Goodell said.

In the conversation with Acho, called “Uncomfortable Conversations with a Black Man,” Goodell said he is “very comfortable talking about race.” He added that when Kaepernick and others began kneeling, who all faced intense backlash, he “didn’t know what was going on in the communities.”

Goodell said the players’ peaceful protests were never about the American flag.

“It is not about the flag. The message here that what our players are doing is being mischaracterized. These are not people who are unpatriotic. They’re not disloyal. They’re not against our military. In fact, many of those guys were in the military, and they are a military family,” Goodell said. “What they were trying to do is exercise their right to bring attention to something that needs to get fixed. That misrepresentation of who they were and what they were doing was the thing that really gnawed at me.”

In the wake of George Floyd’s death at the hands of Minneapolis police in May, a number of professional athletes have started kneeling during the national anthem.

Goodell said it was “horrific” to see Floyd’s death, which was captured on video by a bystander and widely shared online — sparking protests against police brutality and racial injustice across the country and around the world.

“There was a part of me that said, ‘I hope people realize that’s what the players were protesting, and that’s what’s been going on in our communities. You see it now on television, but that's been going on for a long, long time.' And that’s where we should have listened sooner,” Goodell said.

“And we should have been in there with them. Understanding it and figuring out what we can do as the NFL. We can’t solve all problems, Emmanuel. We can’t. But we’re big in our communities, we have a platform, we have an opportunity. And we’re using that effectively now. I wish we could have been doing it earlier,” he continued.