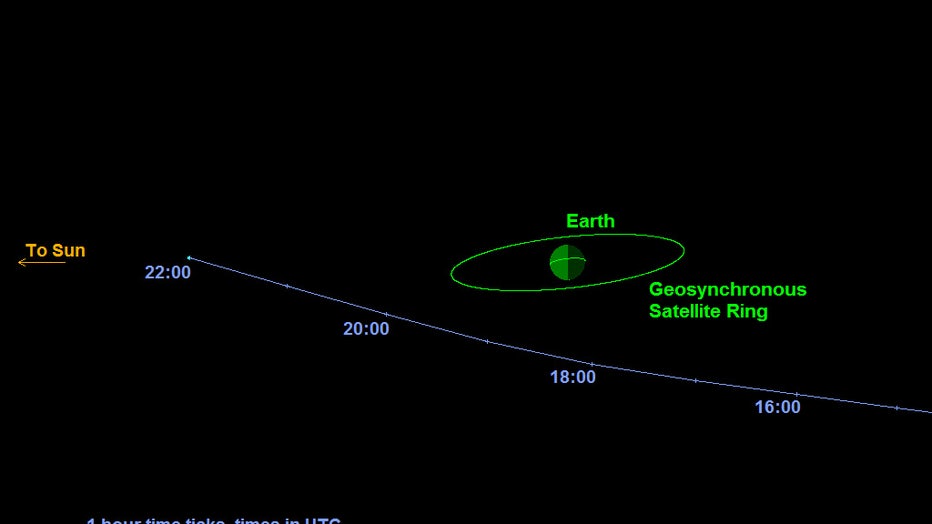 This graphic shows the path the asteroid will take as it passes Earth on September 7, 2014. The space rock will come within one-tenth the distance from Earth to the moon.

It won't hit Earth or any of the thousands of satellites orbiting the planet, NASA says. It will give astronomers and scientists a chance to study it.

The asteroid won't be visible the naked eye, but amateur astronomers should be able to see it with telescopes.

Called 2014 RC, the asteroid was discovered on August 31 by the Catalina Sky Survey near Tucson, Arizona.

NASA's Near Earth Object Program estimates there are thousands of asteroids that could threaten Earth, but experts say none of the ones being tracked are expected to hit the planet anytime soon.

Sometimes, though, space rocks sneak by the scientists and amateur astronomers who track them. On February 15, 2013, a nearly 60-foot-wide meteor plunged into Earth's atmosphere and exploded over the Russian city of Chelyabinsk with the force of about 30 nuclear bombs. The blast injured about 1,500 people.

The Chelyabinsk meteor was undetected before it was spotted by local residents as it streaked across the sky. It exploded on the same day that Asteroid 2012 DA14, one that was being carefully tracked by NASA, safely passed by Earth.

NASA is trying to speed up the way it tracks potentially hazardous asteroids and to learn how to deflect rocks that threaten Earth. Its Asteroid Initiative includes a plan to capture an asteroid and tug it into orbit around the moon in the 2020s. If it works, astronauts will land on the asteroid, take samples and bring them back to Earth.