Omicron variant: What to know about the new COVID-19 strain

An advisory panel of the World Health Organization classified on Nov. 27, 2021, a worrying new COVID-19 variant first detected in South Africa as a highly transmissible virus of concern, naming it "Omicron" under its Greek letter system.

Large cities across the world are canceling their New Year’s Eve celebrations due to the spread of the omicron variant of the coronavirus while others are forging ahead with their plans.

The iconic New Year’s Eve celebration in New York City will go ahead as scheduled but will be "scaled back", Mayor Bill De Blasio says, as party-goers will have to be fully vaccinated, wear face masks and practice social distancing measures amid the spread of the omicron variant.

"New Yorkers have stepped up tremendously over the past year – we are leading the way on vaccinations, we have reopened safely, and every day we work toward building a recovery for all of us," the mayor of the largest American city explained. "There is a lot to celebrate, and these additional safety measures will keep the fully vaccinated crowd safe and healthy as we ring in the New Year."

Other cities across the globe took a different approach and canceled New Year’s Eve celebrations altogether.

There will be no fireworks show at the Acropolis in Athens, Greece this year and authorities canceled all local Christmas and New Year’s Eve events.

The German cities of Berlin, Frankfurt, and Munich have all canceled their firework celebrations and have prohibited large gatherings due to a feared "fifth wave" of the coronavirus. 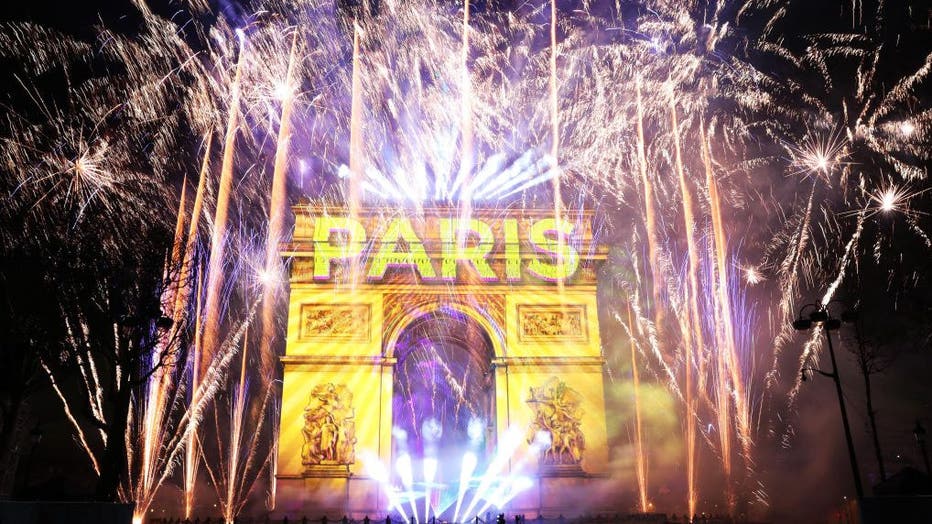 Fireworks illuminate the sky over the Arc de Triomphe during the New Year's celebrations on the Champs Elysees in Paris, France, on Jan. 1, 2020. (Photo by Gao Jing /Xinhua via Getty ) (Xinhua/Gao Jing via Getty Images)

However, many prominent celebrations are still scheduled to take place including in Las Vegas, Nevada, where fireworks will be launched from the top of eight casinos on the Strip for eight minutes along with a firework show in Downtown Las Vegas.

After officials in Rio de Janeiro, Brazil, initially said New Year’s Eve celebrations will not be held, the city backtracked and now says the show will go on.

In Seattle, Washington, the usual fireworks show atop the Space Needle will take place online using special effects that can only be seen by people who tune in virtually.

The omicron variant has already caused many headaches during the holiday season leading to the cancellation of thousands of flights due to staffing shortages that are likely to affect New Year’s Eve travelers.

Omicron has raced ahead of other variants and is now the dominant version of the coronavirus in the U.S., accounting for 73% of new infections last week, federal health officials said Monday.

The Centers for Disease Control and Prevention numbers showed nearly a six-fold increase in omicron’s share of infections in only one week.

Two new British studies provide some early hints that the omicron variant of the coronavirus may be milder than the delta version and seem to bolster earlier research that suggests omicron may not be as harmful, leading to fewer hospitalizations.

Associated Press contributed to this report. Get updates on this story from foxbusiness.com.