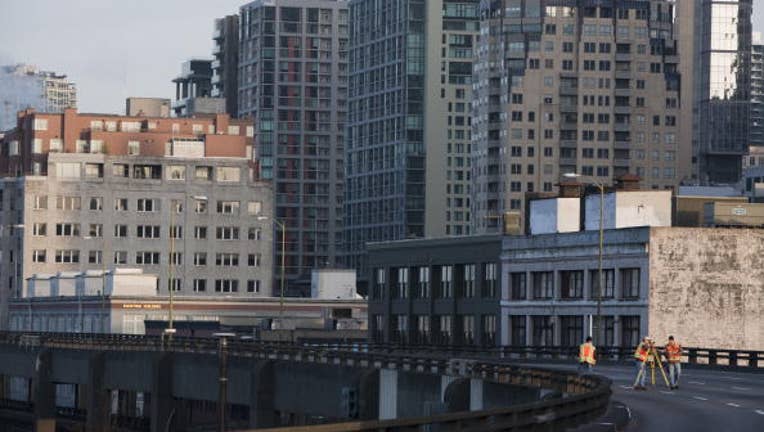 The Alaskan Way Viaduct winds past downtown Seattle. The viaduct, which was constructed in the 1950s and carries 110,00 cars a day, is slated to be replaced by a deep bore tunnel. (Photo credit: Stephen Brashear/Getty Images/2009)

SEATTLE -- New and widening cracks were found along some of the Alaskan Way Viaducts girder supports Saturday, leading the Washington State Department of Transportation to schedule a viaduct closure so the cracks and what's causing them could be better studied.

Transportation department officials said they planned to close the viaduct for an "in-depth" inspection on March 22. As part of the inspection, crews will install monitoring devices to track the movement and growth of the cracks over time.

WSDOT inspects the viaduct four times each year, including two inspections that require full closures. During the most recent inspection, transportation officials observed new cracks as well as widening cracks along the supports near Spring and Seneca streets. Officials said the new cracks were about 1/16" wide.

The section of the viaduct where cracks was found is located more than a half mile north of the SR 99 tunneling machine. The cracks were not related to tunneling activity, officials said.

"These small cracks are evidence that the 60-year-old bridge continues to deteriorate, and will continue to need constant attention to remain open," Tom Baker of the WSDOT said Monday.