The orcas face a lot of problems, but three main issues stand out: a lack of prey, noise pollution and contaminants that make it into Puget Sound.

SEATTLE - In late 2019, Washington published nearly 50 recommendations aimed at steering the Southern Resident killer whales, also known as orcas, away from the brink of extinction.

Three groups – or pods – make up the Southern Residents: J, K and L pods. After the recent birth of J-59, the population is believed to be 74 down from the 88 orcas that existed when the group was first listed as an endangered species back in 2005.

The orcas face a lot of problems, but three main issues stand out: a lack of prey, noise pollution and contaminants that make it into Puget Sound.

In the latest update from the state’s tracking, action has been taken on all but two recommendations, the biggest of which was a recommendation to suspend viewing of the Southern Resident orcas. Instead, new rules were created to give the orcas more space.

"Not suspending viewing was a choice made by the governor and the legislature at the time," explained Julie Watson, WDFW’s killer whale policy lead. "They said, ‘Let’s take some time looking at these other things and learn and go from there.’"

Laws were updated to require vessels stay 300 yards away from the orcas, and at least 400 yards from their paths. A variety of agencies – both state, federal, and bi-national – have also worked to educate people through the "Be Whale Wise" program.

More controversial recommendations considered early-on, like breaching the lower Snake River dams, never came to fruition. Instead, a recommendation to establish a stakeholder process to discuss the potential of breaching/removing the dams was made. A final report from the Office of Financial Management reviewing the impacts was released in March 2020, and further discussion has continued.

One of the noticeable changes since the recommendations were made, has been the uptick in hatchery fish being introduced to local streams and rivers.

The state, tribes and public utilities received $13.5 million in 2019 to up hatchery production. According to the Governor’s Salmon Recovery Office, that work will result in an additional 26 million smolts – or young salmon – annually.

Since then, the Legislature has approved additional funding to improve facilities, and up production further.

"This is the key to keeping everything going," said Brodie Antipa, a hatchery operations manager for Fish & Wildlife during a recent tour of a facility along Soos Creek. "Fisheries, sport, tribal, feeding the orca – it’s all right here, it’s where it starts in the hatchery."

Antipa walked FOX 13 around the newly revamped facility this month – not along ago, they raised around 4.2 million smolts in a year. The number has now increased to 6.5 million.

It’s a very different process, because the fish they’re raising are an endangered species in their own right.

Funding from the state, tribes and federal governments are essentially used to boost an endangered species, that will eventually feed another. It’s one of the only instances of such work taking place anywhere in the U.S.

For those on the ground floor of the work – like Antipa – it’s a reminder that we play a major role in the decrease in iconic Pacific Northwest species. Much like orcas, humans have had an oversized role in the decrease in salmon: population growth has led to habitat destruction, contaminant runoff that transfers from salmon to orca, not to mention our impact on climate.

"If it wasn’t for the hatchery there wouldn’t be much left in this creek," said Antipa. "We’re constantly adapting to change in water quality. During drought years where we get hot water here, it’s not uncommon for us to hit 70 degrees, which is really hard to grow salmon in 70 degree water – so climate change is having an effect on how we do business here. We’re moving more and more fish offsite during the summer time when we’re subject to drought and really hot water."

Hatchery fish aren’t the only success story. Plenty of time, energy and money has been poured into restoring natural salmon runs.

According to Galuska, the legislature is trying to expand the work through various types of funding – like the Recreation and Conservation Office, which has put $200 million into salmon habitat restoration in the last two years alone. 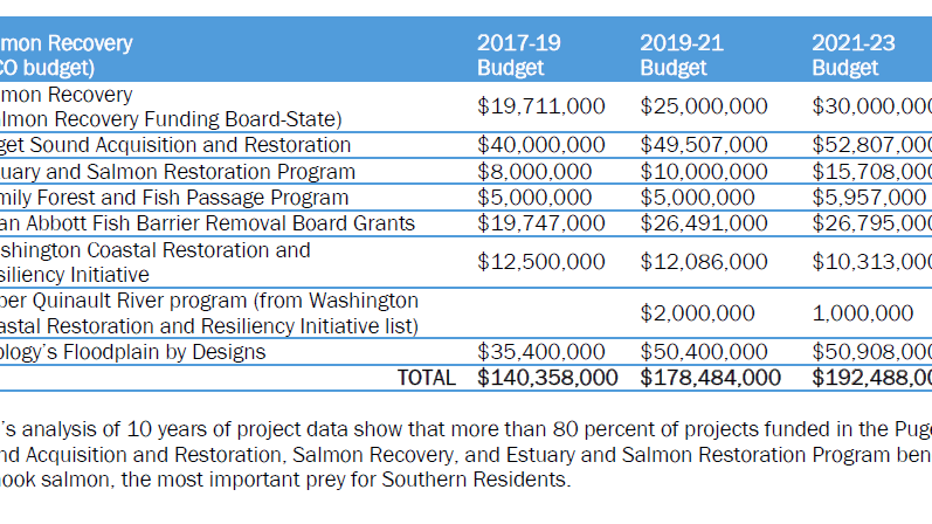 That said, the challenge isn’t getting easier year-to-year. Population growth and a changing planet are moving the goal posts constantly.

"We’re up against quite a bit with climate change and the growing population in Seattle," she said. "Seattle was the number-one growth city in 2020."

Ensuring orcas has fish to eat is one thing, but whether they can find the fish is another issue altogether.

Orcas essentially send out a series of clicks (an example from NOAA can be found here). When the sound wave hits an object, it bounces back to a whale, allowing them to detect fish up to 500 feet away.

Puget Sound, however, makes that skill difficult as locals and businesses create noise that disrupts the Southern Residents ability to hunt – and new research seems to indicate that females are more likely to give up on prey when their hunting grounds are too noisy.

"We know that female Southern Resident orcas need to find and capture food, so they can meet their nutritional needs both for gestation and lactation," explained Watson. "The fact that they are being disproportionately impacted and are more likely to give up trying to find food when boats are nearby is concerning to us."

Perhaps the biggest change underway in terms of noisy waters, is the launching of Quiet Sound – a new effort to implement shipping noise-reduction initiatives. The work is just getting off the ground, but the long-term goal is to better understand the acoustics large commercial vessels are creating and how they can best reduce negative effects on orcas hunting.

"The next steps will be coming up with real concepts to quiet the Sound," said Galuska. "Part of that will be technology – through private industry, the maritime industry – and that does take time. It takes time, effort and funding to do all of those things. I think we’ll be looking to that group to see what ideas, and innovations they can come up with."

Despite the challenges, there is a feeling of hope when talking with people who are closest to this work.

Galuska noted that we have never seen either the resources in terms of money, or the collaboration that we’re seeing right now with state, local, tribal governments in addition to federal funding and nonprofits.

No one can flip a switch. Orca recovery has a lot of moving parts: salmon recovery, habitat restoration, decreasing vessel noise, reducing contaminants, and doing all of that before an already stressed species is too far gone.

Yet, no one seems willing to call it quits.

"While you might not see an immediate benefit tomorrow I think we’re all in it for the long haul," said Galuska. "We are not going to stop moving forward and having hope that we can recover this endangered species."