Christie's victory became a forgone conclusion long before polls closed in New Jersey, as public opinion polls for months have indicated the tough-talking Republican headliner was far ahead of his Democratic challenger. 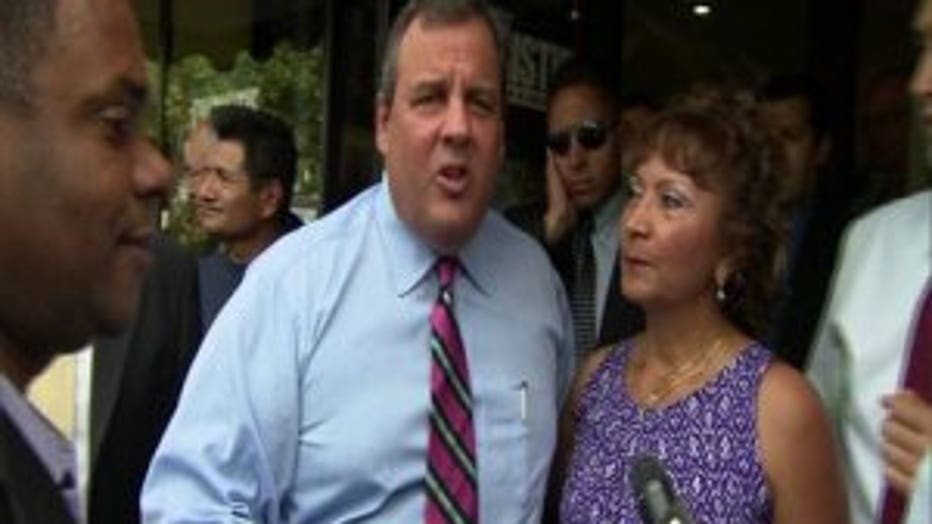 There are national implications to the race, too. With Christie considering a run for the GOP presidential nomination in 2016, his re-election campaign is seen as a tuneup or stepping stone for that likely White House bid.

According to CNN exit polls of New Jersey voters, Christie performed well with groups that normally cast ballots for Democrats. Early exit polls indicate the GOP governor grabbing 56% of the female vote, and winning all age groups other than those 18-29. Christie also took a fifth of the African-American vote and 45% of Latinos, a much better performance than most Republicans in recent elections.

As expected, Christie carried 94% of Republicans, according to the exit polls, but he also won nearly two-thirds of independents and three in 10 Democrats in a state where Democrats and independents made up more nearly three-quarters of Tuesday's electorate.

Polls have also closed in the primary runoff for Alabama's 1st district and the race between former State Senator Bradley Byrne, seen as a more establishment candidate, and businessman Dean Young, a tea party candidate, is still too close to call.

The race for governor in Virginia is also too close to call after polls closed on the divisive contest between Terry McAuliffe, a former Democratic National Committee chairman, and Republican state Attorney General Ken Cuccinelli.

While national issues, like the partial government shutdown earlier this year and the health care law's flawed rollout, have loomed large in the battle between McAuliffe and Cuccinelli, the race has been nasty from the outset and has focused a great deal on personal attacks between the candidates.

What may make results from Virginia -- along with races including a gubernatorial contest in New Jersey, a race for mayor in New York City and a primary battle for a U.S. House seat in Alabama -- most interesting is what they may tell us about 2014 midterms and the 2016 race for the White House.

Virginia and New Jersey are the only two states to hold elections for governor in the year after a presidential contest, putting them directly in the national political spotlight.

After voting Tuesday morning, Christie told CNN's Jake Tapper that he is not just a moderate Republican in a traditionally more liberal state. "I'm a conservative, and I've governed as a conservative in this state and I think that's led to some people disagreeing with me in our state, because it's generally a left-of-center, blue state," he said. "But I think that the difference has been is I haven't tried to hide it, or mask it as something different. I just tell people, 'This is who I am.'"

5 things to know about this year's most important race

In New York, polls predicted progressive City Advocate Bill de Blasio winning in a landslide, which would give Democrats their first mayor in more than two decades in a city where they greatly outnumber Republicans.

In Alabama, it's a fight for the future of the GOP, as a tea party conservative and a more establishment Republican battle in a primary runoff for an open U.S. House seat.

A nasty race in purple Virginia

Of the two gubernatorial races this year, the contest in Virginia is by far the closest.

McAuliffe, a former Democratic National Committee chairman, has consistently had an advantage in the polls, but his margin over Cuccinelli has largely been in the single digits.

The latest poll, a Quinnipiac University survey, shows McAuliffe ahead of Cuccinelli, 46%-40%.

A third-party candidate, libertarian Robert Sarvis, could be a spoiler. According to recent polls, Sarvis is taking around 8% to 10% of the vote, a significant chunk when the Republican and Democratic candidates are so close.

McAuliffe ahead on eve of Election Day

Tuesday's winner will go on to succeed Republican Gov. Bob McDonnell, who's not running for re-election because Virginia governors cannot serve consecutive terms.

The two main campaigns have attempted to frame the race as a referendum on a larger national issue.

Cuccinelli's supporters argue a vote against McAuliffe is a vote against Obamacare. McAuliffe and Democrats have pinned Cuccinelli as a tea party activist, linking him to conservative lawmakers in Washington who initiated a strategy that eventually led to last month's government shutdown.

Avlon: What GOP can learn from Cuccinelli's tanking bid

On top of the national connections, the two sides have also engaged in nasty, personal political warfare that has taken over the airwaves in Virginia. McAuliffe has made sure women are aware of Cuccinelli's support of "personhood" legislation that critics say restrict abortion and some forms of birth control.

While McAuliffe has an advantage over his Republican rival, neither candidate is particularly well-liked. The Quinnipiac Poll released Monday showed 42% of likely voters had a favorable opinion of the Democrat, while 45% had an unfavorable view. Cuccinelli also had a negative favorability rating, 38% to 52%.

Cuccinelli has particularly struggled to gain support among women and unite the commonwealth's GOP base as a whole.

If McAuliffe wins, he would break a long streak in Virginia gubernatorial contests. In the last nine elections, the political party controlling the White House lost the governor's race.

Republicans control 30 of the nation's governorships.

In New Jersey, Chris Christie's re-election has never been in doubt. Rather, the big question throughout this yearlong campaign has been how large a victory the high-profile Republican with national aspirations will capture against state Sen. Barbara Buono, the little-known Democratic challenger.

Christie held leads of 36 percentage points, 28 points and 20 points over Buono among likely Garden State voters in three public opinion polls released on the eve of the election. That has pretty much been the storyline the entire campaign, after Christie's numbers skyrocketed late last year, thanks to his job responding to Superstorm Sandy, which slammed into the Garden State and caused billions of dollars in damage days before Election Day 2012.

Christie has greatly outraised and outspent Buono, who has received little support from national Democrats and their affiliated groups.

The most recent polls indicate Christie winning not only Republican and independent voters, but also grabbing anywhere from a quarter to nearly 40% of Democratic voters in a state where Democrats greatly outnumber Republicans. Those same surveys suggest Christie winning among female voters, staying competitive among younger voters, and performing better with minority voters than most Republicans candidates in recent years. If those kinds of numbers hold up on Election Day, they should bolster Christie's case that he's among the most electable of the potential GOP White House hopefuls heading into 2016.

Christie stays way ahead in last three polls before election

Christie's political future has come up numerous times during the campaign.

"I can walk and chew gum at the same time," Christie said at one of two debates against Buono. "I can do this job and also deal with my future, and that's exactly what I will do."

Asked in an NBC News interview that aired this past weekend if he's planning for a message that extends beyond New Jersey, Christie replied, "I'm not planning for it, I just think it's inevitable."

NYC likely to elect first Democratic mayor in a generation

With Public Advocate Bill de Blasio's massive lead over Republican nominee Joe Lhota in recent polls, the city is poised to put a Democrat back in the mayor's office for the first time in two decades. A survey released Monday showed de Blasio ahead of Lhota 65%-24% among likely voters.

At the center of the race are disagreements over taxes and the city's controversial "stop and frisk" program backed by incumbent Mayor Michael Bloomberg.

De Blasio has campaigned on a promise to raise taxes on those earning more than $500,000 a year to pay for universal pre-kindergarten, an idea Lhota vehemently opposes.

While Lhota has painted himself as a fiscal conservative, he has sought distance from national Republicans on social issues by reiterating his pro-abortion rights and pro-same-sex marriage stances.

As for the stop-and-frisk policing tactics -- which have been called racial profiling and severely constrained by a court ruling -- de Blasio has said he would replace Police Commissioner Raymond Kelly, appoint an independent inspector general, and take sufficient steps to end the searches.

Lhota, former GOP Mayor Rudy Giuliani's deputy and former head of the city Transit Authority, points to the sharp reduction of crime under Kelly and is more eager to defend the program, though he agrees it needs to be reworked.

The mayoral race in the Big Apple was often called a political circus before the primary, when former Rep. Anthony Weiner faced new allegations of his infamous sexting habits. Weiner had strong numbers in the polls as he started his campaign, suggesting New York was ready to forgive the disgraced ex-congressman. But those numbers quickly plummeted as he refused to drop out of the race after he admitted to having online relationships with women even after he resigned from Congress.

He eventually placed fifth in the crowded Democratic primary.

City Council Speaker Christine Quinn, a lesbian who would have been the city's first female mayor, was also thought to be a strong contender early on. But as the months went on leading up to Primary Day, she saw her numbers slip, as de Blasio and former comptroller Bill Thompson gained more popularity.

De Blasio, who rose to prominence while also spotlighting his interracial family, narrowly avoided a runoff with Thompson.

Fight for the GOP plays out in Alabama Republican primary battle

The Alabama seat came open when Republican Rep. Jo Bonner resigned in August to take a position within the University of Alabama system. Although today's winner will just become the Republican nominee, not the next congressman, the district has not elected a Democrat since 1965 and whichever Republican wins the runoff is almost certain to win the general election.

Tuesday's race was the first time since the partial federal government shutdown in October that Republican voters could weigh in on which direction they want to take their party. The race has been seen as a precursor before more intra-party fights ahead in primary elections for the 2014 mid-terms.

Byrne has far outraised Young thanks to major help from the business wing of the party, including the Chamber of Commerce, and garnered endorsements from establishment figures, including several Republican House leaders.

Young, meanwhile, has gotten donations from a political action committee run by former Nevada Republican Senate candidate Sharron Angle, a darling of the tea party movement, as well as endorsements from conservative talk show hosts Mark Levin and Erick Erickson, and a lot of support from Christian conservatives.

While both men are conservative, the race may hinge on who is viewed as the most conservative. Byrne has said he would only vote to raise the debt ceiling if it is part of a larger deal, while Young has vowed not to support an increase at all and said over the weekend he would not vote for Republican John Boehner as House Speaker.

Because of the negative political impact of the 16-day government shutdown, which Americans mostly put at the feet of tea party-backed members of Congress, groups such as the Chamber of Commerce have said they will be more involved in primary fights next year. Their aim would be to elect candidates who don't have such strident views and to help prevent tea party candidates from stopping their agenda of keeping the government open, pushing for comprehensive immigration reform and overhauling the tax code.

Also on the ballot

New York is not the only major city holding a mayoral contest on Tuesday. Voters in Boston, Seattle, Detroit, and Cleveland are also electing mayors.

And voters in six states will be weighing in on 31 ballot measures. Among the most interesting: genetically modified food labeling in Washington state, a proposed special marijuana tax in Colorado, secession in 11 Colorado counties, and a push to raise New Jersey's minimum wage to $8.25 per hour.