SEATTLE -- The one thing you should know about Seattle’s new interim Police Chief Harry Bailey is that he’s a man of faith, both in the way his life and in his team. 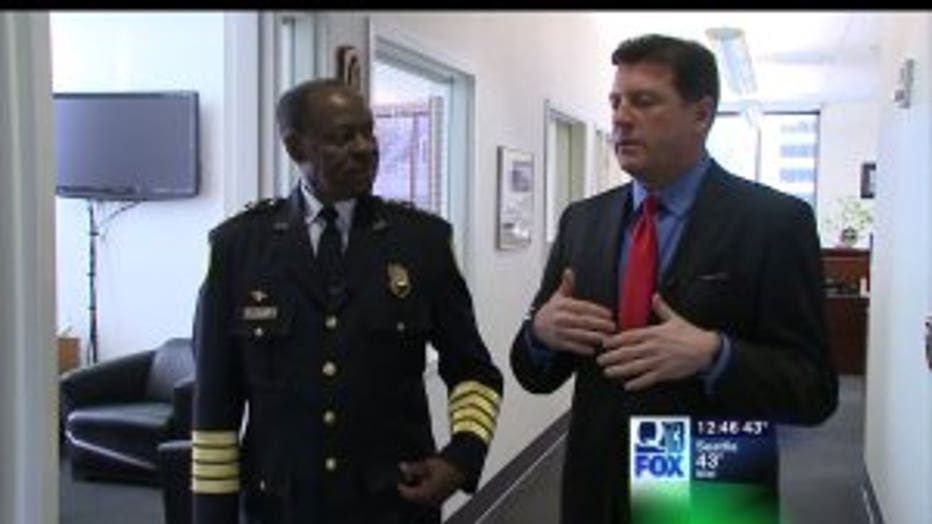 Bailey, who has a giant 12th man flag in the window of his office at 5th and Cherry streets downtown, predicts at 24-7 Hawks win.

“They better win the Super Bowl or I am going to come looking for Russell Wilson and the guys,” Bailey said jokingly.

The department has been preparing to handle security at the NFC Championship game for weeks.

SPD has several command vehicles stationed outside CenturyLink Field as well as the bomb squad and extra officers, including those wearing plain-clothes.  It’s the most high-profile public event for Seattle since Mayor Ed Murray named him Chief.

Bailey spent 35 years with the department and retired in 2007 so does he want the job permanently.

"Absolutely not. I think I'm in the catbird seat," Bailey said. "I do know the mayor is looking for a permanent chief and I know that when that's done, whoever he or she may be that they will have a police department that they will continue to move reform forward, make those connections back with the community and be able to carry this department forward. That's my goal.”

He feels that department always had strong relationships with the community, but in recent years saw that begin to fade.

“I saw that begin to slip a little bit and so community policing was not in the forefront, at least in my opinion, and so that led me to believe that we were going to be in trouble here pretty quickly."

Over the next several months, he says you can expect him to push reform.  Two visible changes will be on the street.  Patrol officers have been ordered to wear  their caps when not in the car and they are getting new Ford Interceptor vehicles to replace the current Crown Victoria.

The new vehicles get better gas mileage saving the city money.  They’re also painted a different color blue.  When I asked him why, Bailey replied lightheartedly, “In honor of the Seahawks and then went on to add  more seriously, “This is Seattle we wanted to make sure that most people are going with the black and white and we wanted to be unique to Seattle. Seattle's a unique city and we wanted our cars to reflect that.”