LOS ANGELES - With coronavirus cases rising in parts of Europe and Asia, scientists worry that an extra-contagious version of the omicron variant may soon push cases up in the United States too.

Experts are also keeping their eyes on another mutant: a rare delta-omicron hybrid that they say doesn't pose much of a threat right now but shows how wily the coronavirus can be.

The U.S. will likely see an uptick in cases caused by the omicron descendant BA.2 starting in the next few weeks, according to Dr. Eric Topol, head of Scripps Research Translational Institute.

One reason? After about two months of falling COVID-19 cases, pandemic restrictions have been lifted across the U.S. Many people are taking off their masks and returning to indoor spaces like restaurants and theaters.

Dr. Anthony Fauci, the U.S. government’s top infectious disease expert, told ABC’s "This Week" over the weekend that he also thinks the U.S. will likely face an "uptick" similar to what’s happening in Europe, particularly the United Kingdom, where BA.2 is the dominant strain. He said he doesn’t think it will be a "surge."

The U.K. has "had the same situation as we’ve had now," Fauci said. "They have BA.2. They have a relaxation of some restrictions such as indoor masking and there’s a waning of immunity" from vaccines and past infections.

In the U.S., the latest data from the Centers for Disease Control and Prevention shows overall COVID-19 cases have been trending down. But the share caused by BA.2 is up significantly; the variant accounted for about 35% of new infections reported last week.

Keri Althoff, a researcher at Johns Hopkins Bloomberg School of Public Health, cautioned that CDC case counts underestimate the true numbers because some people are no longer getting tested and others are testing at home and not reporting the results. Also, she said, not every specimen is genetically sequenced to determine the variant.

One reason the variant has gained ground, scientists say, is that it’s about 30% more contagious than the original omicron. In rare cases, research shows it can sicken people even if they’ve already had an omicron infection — although it doesn’t seem to cause more severe disease. 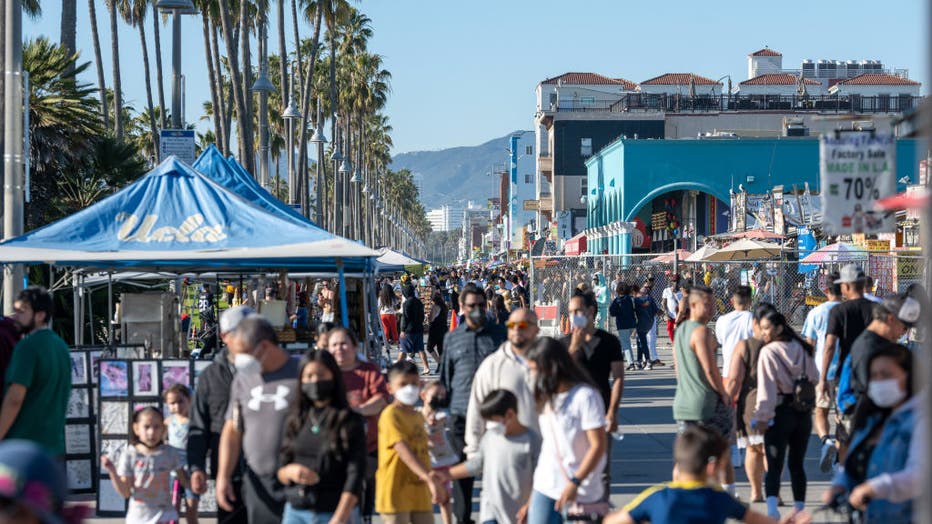 Hundreds of people walk along the Venice Beach Boardwalk on February 06, 2022 in Los Angeles, California.

Vaccines appear just as effective against both types of omicron, but breakthrough infections are possible. And experts point out that vaccination rates are lower in the U.S. than the U.K. About 74% of those 12 and older are fully vaccinated in the U.S, compared with 86% in the U.K.

"We need to emphasize that we’re not protected in this country compared to peer countries," Topol said.

Still, not all experts are equally concerned about a BA.2-related rise in U.S. cases. Dr. James Musser, head of genomic medicine and infectious diseases at Houston Methodist, said the variant has so far only caused about 1% to 3% of cases in his medical system. Cases there have usually tracked closely with what’s happening in the U.K.

He called BA.2 "something we’re keeping an eye on," but said, "I’m not losing sleep" over it.

That's how many scientists view the other variant that some in the public are calling "deltacron," a hybrid containing genetic information from both delta and omicron.

Earlier this month, Maria Van Kerkhove of the World Health Organization said the hybrid has been detected at "very low levels" in France, the Netherlands and Denmark. And two recent studies, which have not yet been peer-reviewed, point to a tiny number of cases in the U.S.

Much remains unknown about the hybrid. There’s no evidence it causes more severe disease, and it doesn’t look like it’s infecting many people. CDC researchers identified 9 samples, seven from the mid-Atlantic region in a study released Monday that hasn't yet been peer-reviewed. Topol, who was not involved in the research, said there’s no evidence it has the potential to spread.

It’s common for coronaviruses to shuffle gene segments, said Dr. Stuart Campbell Ray, an infectious disease expert at Johns Hopkins University. With two variants circulating at the same time, people may get double infections, and a "progeny virus" could emerge.

Given the virus’ ability to spawn new mutants — and the rise of BA.2 — experts say people should get vaccinated if they’re not and keep their masks handy.