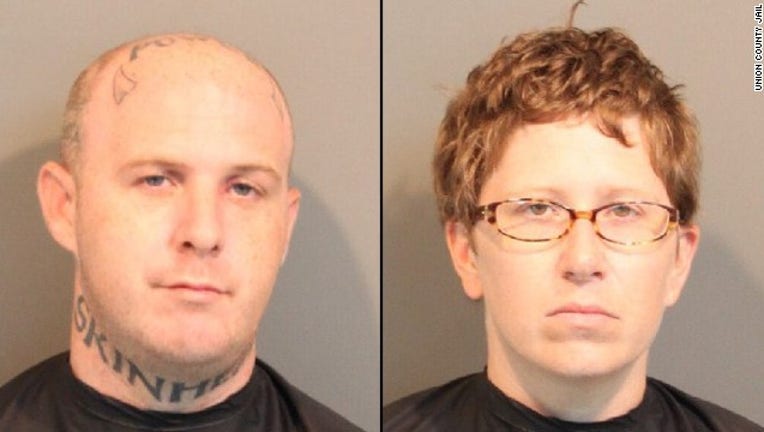 Jeremy, left, and Christine Moody were sentenced to life in prison for murdering a sex offender. From Union County Jail via CNN.

SEATTLE -- In court, the South Carolina neo-Nazi couple seemed remorseful for the 2013 murder of a sex offender, but they changed their tunes when their life sentences were handed down.

"Child molesters do not deserve to live," Jeremy Moody said as he was led out of a Union County courthouse Tuesday wearing handcuffs and striped prison scrubs. "Had to do it over again, I'd kill more."

As his wife, Christine Moody, was placed into a police car for transport to prison, she added, "I have no regrets. Killing that pedophile was the best day of my life."

The couple was charged in the murders of Charles Parker, 59, and his wife, Gretchen, 51, in July. The Moodys went to their Jonesville home pretending to have car trouble, entered the home and killed the couple, Union County Chief Deputy Perry Haney said at the time.

Jeremy Moody, 31, told police he killed the Parkers because Charles Parker was on the South Carolina sex offender registry, Haney said. He was convicted in 1991 of sexual assault on a child and again in 2003 of third-degree criminal sexual misconduct involving a 31-year-old woman, CNN affiliate WHNS reported, citing police and court records.

The Parkers were found dead July 22. They'd been stabbed and shot with a .380 handgun, Haney said. Police used images from the Parkers' home surveillance system to track down their killers, he said.

Integral to identifying Jeremy Moody, police said, were his tattoos: In addition to the words "white power" atop his bald head, he also has the word "skinhead" tattooed almost ear to ear beneath his chin.

In bond court, Christine Moody, 37, called Charles Parker a "demon," and she and her husband claimed to be part of a white supremacist group called Crew 41, WHNS reported.

Prior to their sentencing, both Moodys expressed remorse for their crimes, as Jeremy Moody told the court, "Not a day goes by that I don't regret the incident that happened, and I know that what I've done is the sin."

Christine Moody also feigned contrition, reading from the Bible and saying, "I truly believe God has forgiven Jeremy and I. I hope you do, too."

They told the court they suffered from mental problems and had a history of sexual abuse in their families. The Moodys' defense attorney asked for 30-year sentences, WHNS reported.

"I saw you smiling at each other in court," he told them, handing down life sentences.

And with that, so went the Moodys' remorse.

"See you perverts later," Jeremy Moody said as he was escorted out of the courtroom. "That's what child molesters get."

Outside the courthouse, Christine Moody told reporters that she and Jeremy have "a love that will withstand" their life sentences, and if given the opportunity, they'd kill Parker again.

Reporters challenged her about her apparent change of heart: Was she lying when she told the court she had repented?

And did she have anything to say to Parkers' families?

"May they die also," she said before officers placed her in the back of a squad car.

Family members told WHNS they were pleased with the Moodys' sentences and unsurprised by their vitriol. That doesn't mean Charles Parker's sister was happy about being taunted.

"It made me mad. They was laughing about what they did, took somebody's life the way they did it," Brenda Franklin told the station. "Nobody should die like that. Nobody."