SEATTLE --  More than 585,000 people in Washington sought unemployment benefits last week, with 143,000 people filing claims for the first time as businesses remain closed or with limited operations due to the stay-at-home order issued due to the cororavirus pandemic, state officials said Thursday.

With the growing economic crisis comes growing frustration from people waiting on unemployment checks. They can’t seem to get approved and can’t get answers from the state about when they can expect some relief.

And starting Saturday, thanks to the federal CARES Act, the number of people eligible for unemployment is going to skyrocket.

People who have filed say they've waited weeks for benefits to be approved. More frustrating, though, is that they can't seem to get answers.

The state's employment commissioner, Suzan LeVine, says the state is bringing more workers on board, even pulling some people out of retirement to help with the flood of claims. Still, she admits that the state's system just isn't designed for the current volume.

This will be especially important come April 18, when the state's unemployment website incorporates the federal CARES Act provision, expanding who’s eligible for benefits to include those impacted by COVID-19 but not otherwise eligible.

This includes independent contractors, self-employed people, and those with fewer than 680 hours worked. It also provides everyone receiving benefits, including people who are already receiving unemployment, with an additional $600 per week and 13 more weeks on the unemployment rolls if they need it.

"This will be a really important source of stability for potentially hundreds of thousands of Washingtonians," LeVine said.

More than half the calls to the employment office are questions that can be answered by visiting the state's website. The commissioner says part of the problem is that people are clogging up the phone lines for questions that can be found online. Some of the more important information could be hidden in hyperlinks that bring you to other pages. Be sure to click through every link and read everything you can on the website before you call the employment office.

"More people are using the system who have never thought about applying for assistance," she said. "It’s a complicated system. We’re seeing a lot of people not submitting all the information."

Watch this video before you start your application:

What if you've been locked out of your account? Watch this video for help:

Being better prepared will give you the best chances for a quick return. Money is being deposited within 5-7 days of being approved, she said. 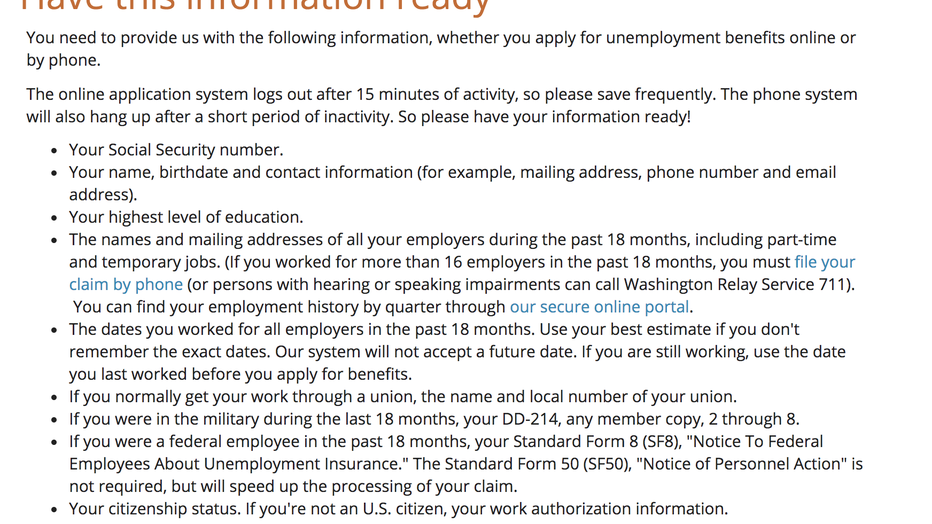 WHAT TO DO IF YOU'VE ALREADY FILED

If you've submitted all the required documentation and your status still says pending, there's a good chance the state is waiting on verification from your employer on how many hours you worked, or fact-finding to address discrepancies between your claims and what information your employer is giving.

Have you checked your spam folder? Some of the information will be sent through email, and the state says they've heard these emails are sometimes going to junk mail.

By next week, there will be at least 450 people on hand to handle unemployment claims, and a week later, the number of people will increase to 1,000, LeVine said.