The Puget Sound Auto Theft Task Force (PSATT) is reporting a 4th of July weekend full of vehicle thefts, with nearly 50 of them happening in Pierce County.

PIERCE COUNTY, Wash. - The Puget Sound Auto Theft Task Force (PSATT) is reporting a 4th of July weekend full of vehicle thefts, with nearly 50 of them happening in Pierce County.

In a Facebook post on Tuesday, the PSATT revealed a full list of active and closed car thefts, ranging from near-violent incidents to stolen catalytic converters, in cities all over the county. The full list can be found below, but some thefts from over the weekend are worth highlighting.

Here are the rest of the auto thefts reported over weekend:

According to the comment section of their July 5 Facebook post, not every citizen's stolen car was listed on the PSATT's recent update of stolen cars. Several people responded to the post, adding their own stolen vehicle's information, make, model, year and plate number. 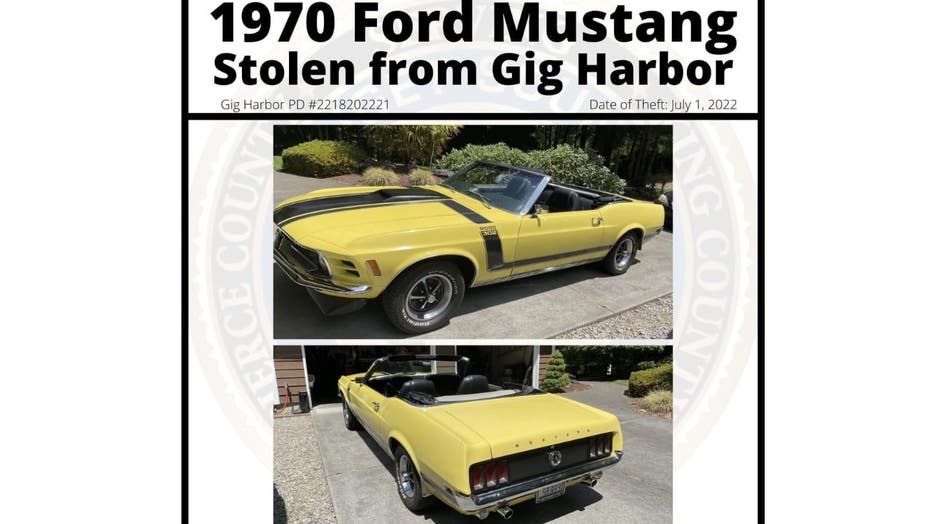 For instance, not included on the list is a convertible 1970 Ford Mustang that was stolen from downtown Gig Harbor on July 1.  Charlie Taylor says he parked his vehicle at Arabella's Landing Marina to go fishing.  When he returned, it was not where he left it.

"It’s like a kick in the stomach, I just felt sick, and I still do," said Taylor.

He bought the car two years ago.

"I had a new engine put in it, new headers, exhaust, and it was running perfect," he said.

Gig Harbor Police are asking for the public to call 911 if they see his yellow Mustang with WA License #CV55889.

Officers located a stolen truck parked nearby and suspect the thief may have dumped that one prior to taking Taylor's Mustang.

"It’s really a violation. All the stuff I did and work I put in, and some guy is I out joyriding in it," said Taylor.

In April, the Washington State Patrol (WSP) released a report revealing that vehicle thefts across the state have increased 88% since 2021. The Washington Association of Sheriffs and Police Chiefs (WASPC) blames the state’s revised laws on police pursuits, which went into effect in July 2021. Their estimate is that, barring any change to the laws, 2022 would end with more than 50,000 cars stolen.

Right now, car thieves are not being booked into the Pierce County jail because of Covid booking restrictions.

"The problem is everyone who would steal a car is taking the opportunity to the law changes and lack of booking restrictions. Makes it easier and there’s a blueprint for how to get away with it and that’s don’t stop driving," said Pierce County Sheriff's Sgt. Darren Moss.

Anyone with information about a stolen vehicle is urged to contact the PSATT tip line at 253-329-2442 or email autothefttips@wsp.wa.gov.