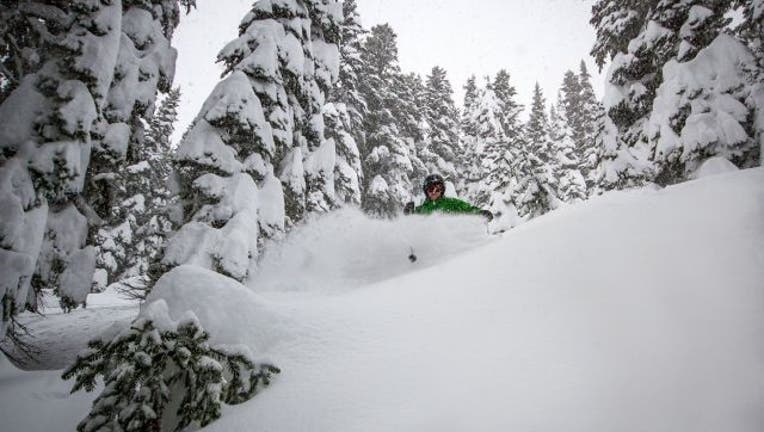 And by the looks of ski resort parking lots, mountain enthusiasts have waited the entire winter for such a dumping.

Skiers and snowboarders have crowded ski resort parking lots and stood in line for up to an hour to get a taste of the recent powder this past week. Luckily, there's plenty of snow to go around. In the past two days, Summit at Snoqualmie has received more than three feet of fresh snow. Stevens Pass has recorded nearly 100 inches in the past week, including over 30 in the past three days. And Crystal Mountain, which closed Monday when snow-covered trees crashed down on power lines, shutting down the mountain's reserve generator, has received 113 inches in 11 days, including 69 inches in the past four.

One snowboarder, Matt Lemier of Olympia, told Q13 FOX News snow accumulations like this are something the resorts haven't seen in at least a year.

"It turns the whole mountain into a playfield," Lemier said. "To get this many powder days in a row is rare. It's sick."

While skiers and snowboarders are getting sick turns, a danger lurks deep in the tasty powder.

On Wednesday, a 35-year-old Seattle man who was reported missing while skiing at Crystal Mountain Resort was found dead a short time later in a tree well, suffocating under a pile of snow.

A tree well/snow immersion suffocation accident happens when a skier or snowboarder falls – usually headfirst – into deep loose snow and becomes immobilized and trapped under the snow and suffocates.

Tree wells are specifically prevalent in the Pacific Northwest as huge powder dumps partner with thick, heavy trees to create veritable bear-traps for powder skiers. According Deepsnowsafety.org, a deep snow safety website, 90 percent of people involved in tree well hazard research experiments can not rescue themselves.

"If you decide to leave the groomed trails, you're venturing into a natural environment," said Gwen Howat, the operations Manager at Mt. Baker Ski Area.

Howat said snow immersion suffocation could be just as big a risk as avalanches in the mountains during deep snow periods. She said always riding with a partner and avoiding trees are helpful ways to stay safe. But if the worst happens and you do fall into a well, Howat offered these tips for escape:

Most area mountains have issued a "Deep Snow Advisory," warning mountain goers to ski or ride with a partner and stay away from wells. Still, enthusiasts like Lemier are undeterred by the warning, and are willing to take the risk for fresh pow.

"I'm heading up this weekend," Lemier said. "It's going to be good."