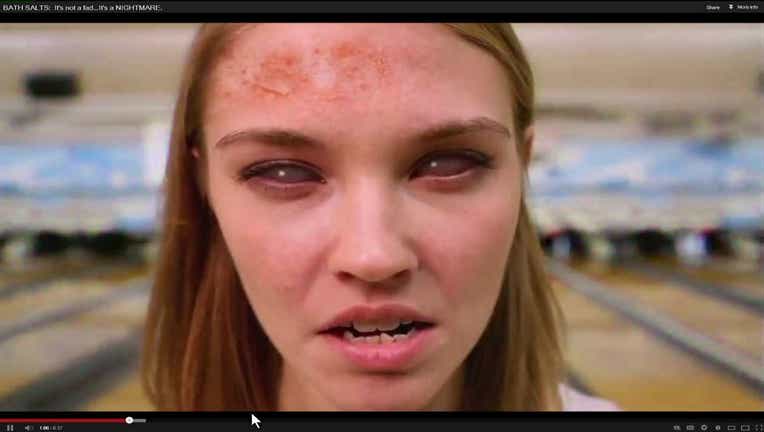 SEATTLE – In the latest effort to combat the synthetic drug epidemic, the Navy released a public service announcement regarding the dangers of bath salts.

In California, dozens of sailors were booted for using the synthetic drug.

Here, the Washington Poison Center says they have heard of cases where local servicemen and women are getting high on bath salts.

The Navy's PSA addresses not only the health risk of using bath salts, but also how they can impact a service member’s job and loved ones.

The dramatization shows a sailor ingesting bath salts. During his “high” the sailor sees his girlfriend in a demonic light. Later in the video, the soldier is rushed to the hospital, because of the synthetic drug’s effects.

“It gets the message across,” said Dr. Thomas Martin with Washington Poison Center.

Martin says bath salt abuse is a growing problem for local military, including naval bases in Everett and Bremerton.

Statewide, the worst year was in 2011 when the poison center received 118 calls of users getting sick off of bath salts. The calls decreased last year with stricter state regulations but Martin said the designer drug is growing in popularity for some in the military.

“They are attracted to stimulant drugs that make them feel stronger and faster and much more competent, makes them feel good, and yet they think they won’t be detected,” said Martin.

Bath salts are hard to pinpoint during routine drug tests. It mimics the effects of stimulants like meth but are more dangerous, often causing schizophrenia and psychosis.

"The reaction is unpredictable -- you could turn on your loved ones, injure them or kill them," Martin said.

In 2011, a JBLM soldier shot his wife and himself. Their son was found in their Spanaway home with a plastic bag over his head. The soldier tested positive for bath salts.

“We are also not trying to protect the person or public, but our guys, too,” said Everett police spokesman Ryan Dalberg.

Everett police could not talk specifics about bath salt abuse among sailors, but they do say the synthetic drug started sneaking into their city years ago. Now,  the graphic PSA is circulating and the Navy is hoping to scare off potential users.

Lt. George  Loeffler from the Naval Medical Center San Diego is featured in the P.S.A. He describes the effects of bath salts he’s seen firsthand.

“The patients I’ve run into have been really sick,” said Loeffler. “And I’ve seen these impacts affect them and their lives, their military careers, but also their families.”

Bath salts can produce both medical and psychiatric side effects, Loeffler said.

“These are substances that have never been tested on human beings,” said Loeffler. “Most often haven’t been tested on animals either. Furthermore it’s not a single substance, it’s actually a class of substances. You have no idea what you’re getting, what amount you’re getting and we don’t know what effects that they have on human beings. So, I think that the metaphor of Russian roulette is pretty apt.”