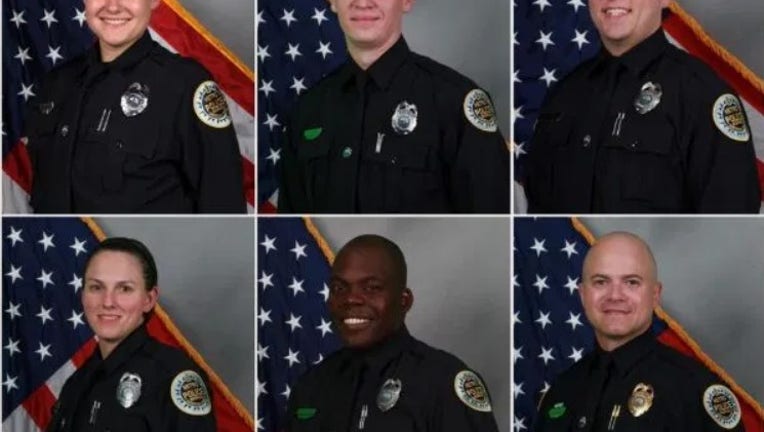 Six officers with the Metropolitan Nashville Police Department are being recognized for helping to evacuate a neighborhood before an RV exploded Christmas Day.

The Metro Government of Nashville and Davidson County put out a statement Friday naming the individual officers.

Police were responding to a report of shots fired Friday when they encountered the RV blaring a recorded warning that a bomb would detonate in 15 minutes, Metro Nashville Police Chief John Drake said. Police evacuated nearby buildings and called in the bomb squad. The RV exploded shortly afterward, Drake said.

Police believe the blast was intentional but don’t yet know a motive or target, and Drake noted that officials had not received any threats before the explosion.

The chief said investigators at the scene "have found tissue that we believe could be remains, but we’ll have that examined and let you know at that time." Police could not say whether it potentially came from someone inside the RV.

Nashville mayor speaks on the Christmas morning explosion that injured three civilians, one of which was a 4-year-old girl.

The blast sent black smoke and flames billowing from the heart of downtown Nashville’s tourist scene, an area packed with honky-tonks, restaurants and shops. Buildings shook and windows shattered streets away from the explosion near a building owned by AT&T that lies one block from the company's office tower, a landmark in downtown.

Tennessee Gov. Bill Lee said on Twitter that the state would provide the resources necessary "to determine what happened and who was responsible."

The American Red Cross of Tennessee announced that it was working with officials to open a shelter for victims.