NASCAR has vowed to do a better job at addressing racial injustice.

CHARLOTTE, N.C. - The most coveted seat in NASCAR belongs to Alex Bowman in a Hendrick Motorsports lineup shuffle to replace seven-time champion Jimmie Johnson in the iconic No. 48 Chevrolet.

Bowman and crew chief Greg Ives, who won five championships with Johnson as his engineer, will move from the No. 88 into Johnson's ride at the end of the season. The swap announced Tuesday makes Bowman just the second driver of the team created in 2001 specifically for Johnson. 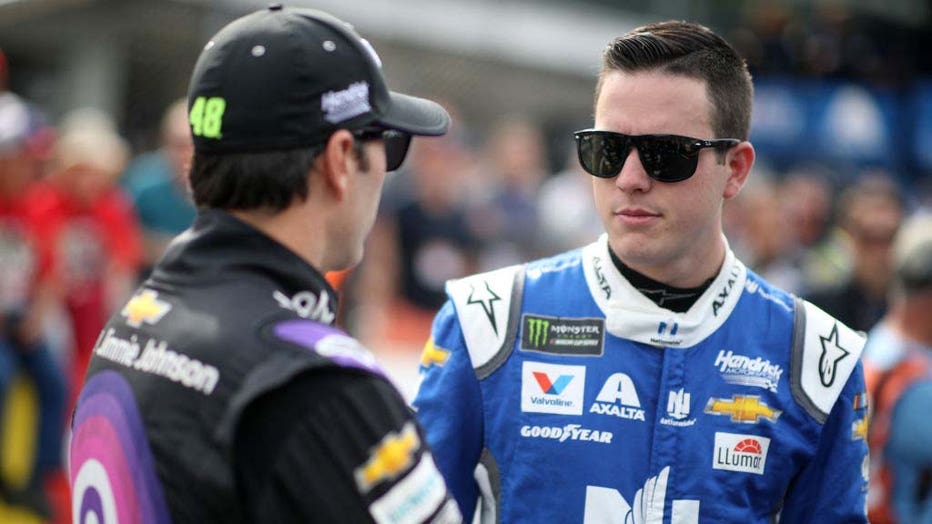 Johnson's 19th full season is his last in NASCAR and he will move to a partial IndyCar schedule next year. His retirement opened the door for Bowman to replace a NASCAR superstar for the second time in four years. Two years ago, he replaced Dale Earnhardt Jr.

“It's definitely pretty similar, you go from (replacing) the most popular driver of all time to (replacing) arguably the greatest of all time,” Bowman told The Associated Press. “It's just an honor for me to get to drive another car with a great number. I know I'm going to get a lot of the same questions I've answered the last couple of years, just replace Jimmie Johnson for Dale Earnhardt Jr. For everyone who has the confidence in me to do it just means the world to me.”

Hendrick Motorsports said it will address its plans for the No. 88 in the next few weeks. Kyle Larson, suspended by NASCAR since April for using a racial slur, is the leading candidate for that opening.

The No. 48 is sponsored by Ally, one of just two companies that funds a car for the entire 38-race Cup Series schedule. Ally wanted Johnson's replacement to contend for titles and Bowman, who has qualified for the playoffs all three years with Hendrick, is currently in position to advance this week into the round of eight.

“He is absolutely championship caliber, and we want to win championships. And this car, with its story and the number, it deserves a racer of Alex’s caliber,” said Andrea Brimmer, chief marketing and public relations officer for Ally.

The No. 88, meanwhile, has used five different sponsors so far this season.

Ally replaced Lowe’s in 2019 for Johnson’s final two seasons and extended its contract with Hendrick through 2023. With Bowman, Ally is paired with a digital savvy 27-year-old car enthusiast and a blank slate to create a new marketing plan.

Bowman was at the top of the list Rick Hendrick gave Ally when Johnson said this season would be his last.

“Mr. Hendrick has such amazing confidence in Alex and talks so well about him, and we trust Rick so much. It just made it so easy to say that Alex was our guy," Brimmer said.

Bowman in March signed a one-year extension for what was thought to be another season in the No. 88. He's won a Cup race each of the last two years and is on track for the best statistical season of his career.

“Every season, Alex gets better. Not only do we see it in the statistics, but his confidence and leadership have truly blossomed," Rick Hendrick said. “Today he’s a proven winner and playoff contender, and his best years are ahead.”

The No. 48 was built around Johnson, who drove the car in all but one of its 737 races the last 20 seasons. Johnson missed the July race at Indianapolis after a positive COVID-19 test and Justin Allgaier replaced him.

It took Bowman years to claw his way into a top ride and his break came when he was barely surviving in the sport. He'd bounced around the Xfinity Series before settling for subpar Cup rides in 2014 and 2015.

He then gambled on his future by taking a part-time job in the Xfinity Series driving for Earnhardt's team in 2016. When Earnhardt was sidelined later that year with a concussion, Bowman filled in at Hendrick for 10 Cup races.

Bowman spent 2017 out of the car but assisted Hendrick and General Motors on development as a dedicated simulator driver. Bowman was then hired full-time for the No. 88 when Earnhardt retired at the end of the season.

His path is a bit similar to Johnson in that Johnson spent several seasons trying to land a competitive ride before approaching Jeff Gordon in a pre-race driver meeting to ask for advice. That conversation was the starting point of Gordon and Hendrick creating the No. 48 team for Johnson.

“I feel like Alex made his way to the Cup level a lot like I did, in a blue-collar way, roll your sleeves up, get to work," Johnson told AP. "You have to continue to prove yourself time and again to get the opportunities. They are not identical paths, but I feel like I know his journey.

“He earned his way into the 88 car through hard work and dedication and doing the stuff nobody else wanted to do," Johnson said. "He's been running great and he deserves the opportunity to drive the 48.”