TOKYO (AP) - "Masaka" — or, in English, "No way." That's how an incredulous Japan reacted Tuesday to the unexpectedly early loss of Naomi Osaka at the Tokyo Olympics, erasing her chances for gold.

And people quickly turned to an outpouring of sympathy.

"Watching you gave me courage. You don’t have to win a medal. Watching you play is enough for all your fans," said Yuji Taida, a novelist.

Japanese media relayed urgent reports on her loss, with "masaka" in the headlines.

"Her mother’s motherland. Her dream to stand at the pinnacle, with the rising sun on her heart, was not to be," reported Sports Hochi, a Japanese daily sports newspaper. 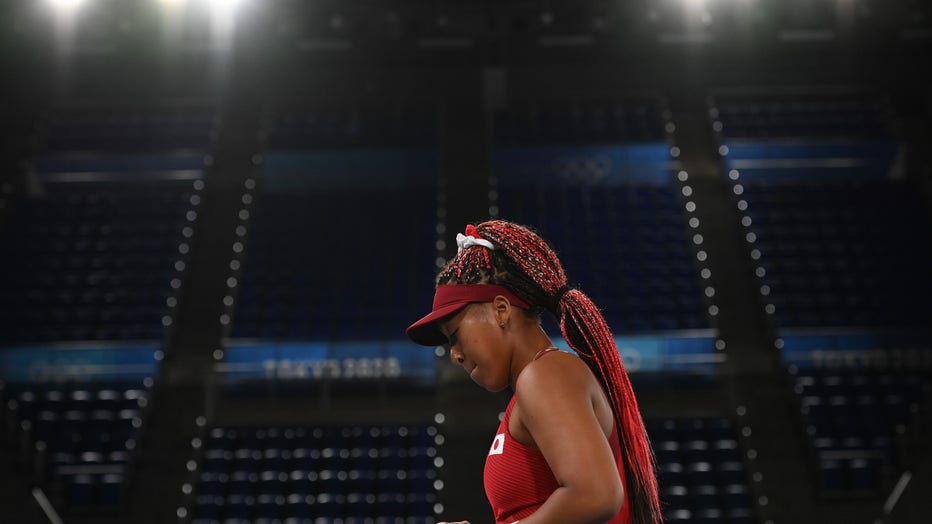 The stock of Japanese tennis racket maker Yonex, one of her major corporate sponsors, plunged Tuesday, just as she lost to former French Open finalist Marketa Vondrousova of the Czech Republic 6-1, 6-4 in the third round. The stock recouped some of the losses but ended down 1.8%.

The disappointment came just four days after Osaka left the nation teary-eyed by running up a Mount Fuji-like set at the National Stadium and lighting the Olympic cauldron with her torch to open the Olympics.

For many here, the Japan-born Osaka, whose father is Haitian, has grown to personify a ray of hope for diversity in a nation long linked with discrimination and intolerance for differences.

"Undoubtedly the greatest athletic achievement and honor I will ever have in my life," Osaka had written on Instagram about her role in her first Olympics.

Some Japanese said it broke their hearts to imagine how much Osaka had wanted to win the gold for her country.

"She has her principles about her pride for Japan, and playing for Japan, while also being proud of her diverse roots in having a Haitian father and living in the U.S.," said lawyer Atusko Nishiyama, who was already starting to worry Osaka might get attacked for her loss.

Nishiyama said she had been impressed by Osaka’s statements on Black Lives Matter, such as last year when she wore masks bearing names of black people who had been killed.

"Compared to her courage, it is so sad some people are still at a very low level," Nishiyama said.

While news reports speculated whether it hurt her not to play for two months and referred to how Osaka had talked about her bouts with depression and then sat out Wimbledon, Japan’s response was overwhelmingly one of doting love.

Japanese media made a point to say Osaka had answered "hai," or "yes" in Japanese, when asked a question by reporters in Japanese and noted that tears were running down her cheeks.

Shotaro Akiyama, a university student who loves to play tennis, said he hoped Osaka wouldn't give up.

"The opponent just played a smarter game this time," he said. "She will have another chance at the gold."