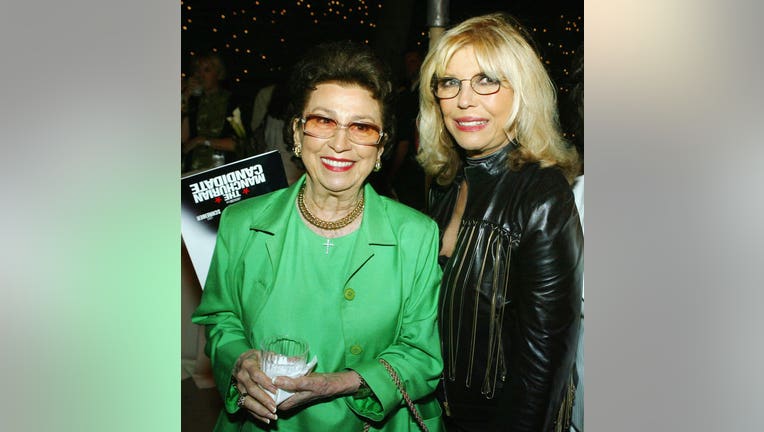 Nancy Sinatra, Sr. (L) and singer Nancy Sinatra pose at the after-party for the premiere of Paramounts' "The Manchurian Candidate" at the Samual Goldwyn Theater on July 22, 2004 in Beverly Hills, California. (Photo by Kevin Winter/Getty Images)

LOS ANGELES (AP) — Nancy Sinatra Sr., the childhood sweetheart of Frank Sinatra who became the first of his four wives and the mother of his three children, has died. She was 101.

Her daughter, Nancy Sinatra Jr., tweeted that her mother died Friday and a posting on her web page said she died at 6:02 p.m. but didn't indicate where she died.

"She was a blessing and the light of my life," her daughter said.

Nancy and Frank Sinatra had been dating as teenagers and married at Our Lady of Sorrows Catholic church in Jersey City, New Jersey, on Feb. 4, 1939, just as Frank's singing career was about to take off. Three years before marrying the former Nancy Barbato, he had landed a 15-minute radio show on local station WAAT.

During the marriage's early years, the Sinatras lived in a modest apartment in Jersey City, where their two eldest children were born. For a time she was employed as a secretary while her husband worked as a singing waiter.

After Sinatra became a pop-music sensation in the 1940s, the couple moved to Los Angeles, where the singer would also become a movie star, raconteur, man about town and notorious womanizer.

That latter accomplishment led Sinatra to leave him after an affair with actress Ava Gardner became public knowledge. Weeks after the pair's divorce became final in 1951, Sinatra's ex-husband married Gardner, while Sinatra went on to raise the couple's three children: Nancy, Frank Jr. and Tina.

After the gossip over the divorce and Gardner marriage died down, Nancy Sinatra devoted herself to family and numerous celebrity friends, largely withdrawing from the spotlight. She not only outlived her husband, who died in 1998, but her son, who died in 2016.

She is credited, under the name Nancy Barbato, on the Internet Movie Database with just two TV and film appearances, in her daughter Nancy's 1975 concert film, "Nancy and Lee in Las Vegas," and in 1974 on her friend Dinah Shore's talk show.

In later years she would become known as Nancy Sr., especially after daughter Nancy became a 1960s singing star in her own right with "These Boots Are Made For Walking" and other hit songs.

She also remained friendly with her ex-husband, the latter being said to have put in requests over the years for pasta and other Italian food dishes she was known to be an expert at preparing. She never remarried.

"There is no bitterness, only great respect and affection between Sinatra and his first wife," Gay Talese wrote in 1966, "and he has long been welcome in her home and has even been known to wander in at odd hours, stoke the fire, lie on the sofa, and fall asleep."