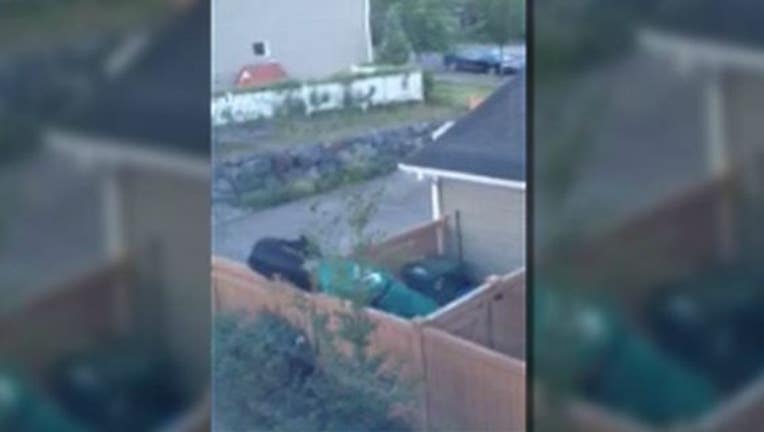 EAST KING COUNTY, Wash – A black bear was so determined to get into the trash at one home Friday morning that it not only climbed into the secured area where the family keeps the bins, it actually hoisted the trash can over the fence to haul it away.

The whole scene was caught on camera by a neighbor who watched it happened.

In the video, provided to Q13FOX News, you can see the bear climbing into the secured area in the back of the home and then attempting to pull what appears to be a recycling bin over the fence first.  The attempt fails, but that doesn’t deter the bear from trying again with the trash can.

Eventually the bear is able to pull the entire trash can over the fence and outside the enclosed area.

Black bears are a common site in the Cascade foothills of eastern King County each spring.  The bears wake from hibernation and go in search of food.  With the number of neighborhood developments growing in places where wildlife had previously roamed unencumbered, residents are constantly being warned to protect their homes from wildlife intruders like bears.

This video shows that even conscientious homeowners can’t always deter a determined and hungry bear.

WATCH THE FULL VIDEO BELOW: