Landslide shuts down I-5 near Bellingham

FOX 13's AJ Janavel has more details on the landslide that has now forced I-5 to close in both directions near Bellingham.

WHATCOM COUNTY, Wash. - Crews are working to clear the roadway after authorities had to shut down Interstate 5 in Bellingham through at least Tuesday morning due to "flooding and active slides."

At about 5:30 a.m. Tuesday, transportation officials said drivers who are heading to Ferndale will be detoured off I-5 at Slater Road, travel east to Northwest Ave., north to Smith Rd., east to SR 539 (Guide Meridian), and use SR 539 north to access Lynden/Ferndale and the Canadian border.

Earlier, a mudslide shut down all lanes of northbound Interstate 5 Monday afternoon just south of Bellingham. Three vehicles were caught in the slide, but troopers said there were no serious injuries. According to the Washington State Patrol, the slide was reported before 2 p.m. near milepost 245, just north of the Whatcom-Skagit County border. 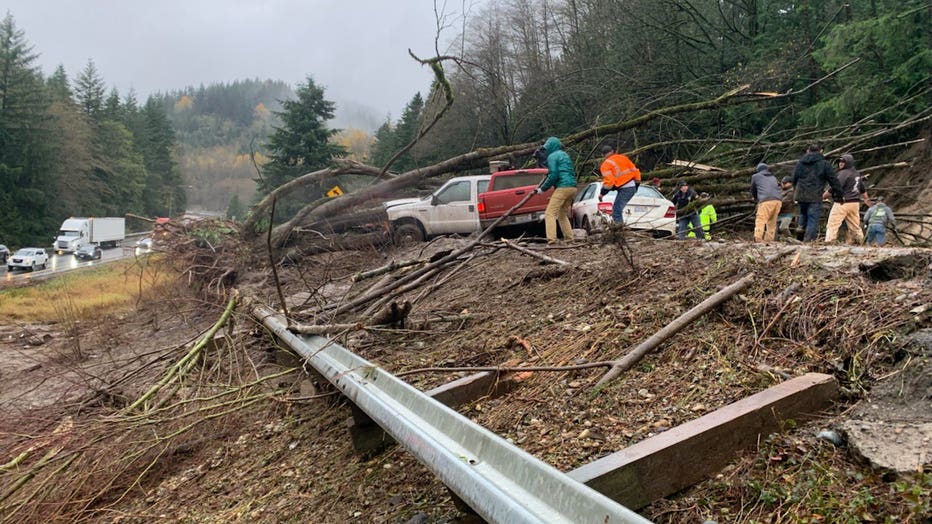 He also said there was not much of a detour available as Highway 9 and SR 11 were both closed.

Heavy rainfall in Washington is causing flooding that forced school closures and evacuation warnings and stranded some in their cars as storms continued in the Pacific Northwest.

About 158,0000 customers were without power in western Washington at one point Monday. A state of emergency for the town of Hamilton was declared Sunday afternoon by the Skagit County Unified Command.

People living in the Hamilton area, about 80 miles northeast of Seattle, were urged to evacuate as soon as possible. All schools in the Bellingham district were closed, because flooding in the area made travel dangerous.