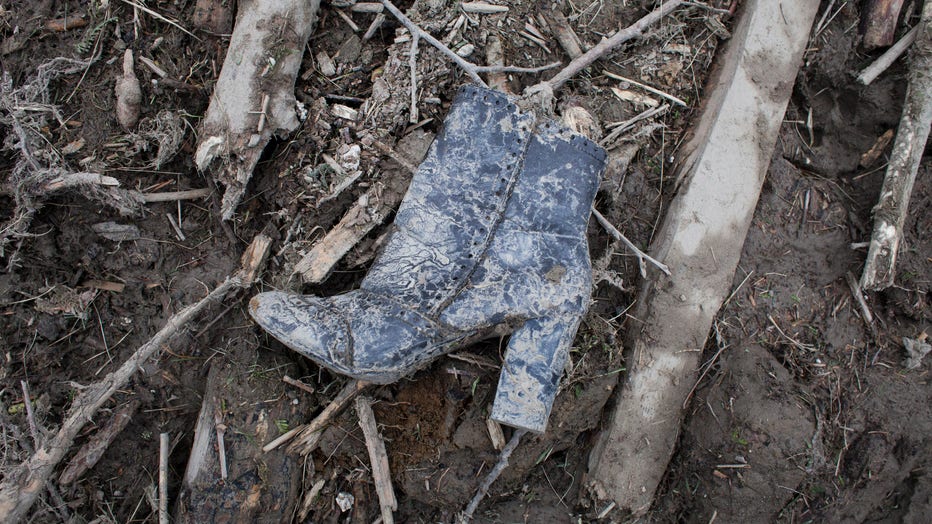 By Maria L. La Ganga and Matt Pearce
ARLINGTON, Wash. — First, there was a roar. Then the trees began to twist. The last thought Gary "Mac" McPherson had before blacking out was that a tornado had struck the Stillaguamish Valley.


The 81-year-old McPherson and his wife, Linda, 69, had been spending the sun-filled Saturday morning side by side, reading the Everett Herald and sipping caffeine — Diet Coke for her, coffee for him — when the landslide slammed into the home they had shared for most of their 46-year marriage.

When McPherson woke up, he was still sitting upright in his heavy wooden chair. But their house in a rural enclave about an hour's drive north from Seattle had been pushed 150 yards. His chair was crushed around him. A ceiling beam lay across his lap.

And he was almost completely encased in mud, so cold that he was beyond shivering. All he could move was his right arm.

The chair saved McPherson in more ways than one. Its arms, tall and strong, kept falling debris from breaking his legs. And when the chair shattered, it provided him with a sharp stick that he used to dig through the thick, cold mud.

"Before he heard people coming, he was able to dig a hole and see the sky," said Kate McPherson, 38. "The whole time, he was calling for my mom, who was right next to him, but she never responded."

McPherson's daughter stopped, tearful. "I'm hoping that meant she went quick," she said. "He doesn't know how long it took from when it hit him and when he regained consciousness and started to dig."

Linda McPherson, the retired head librarian for the small town of Darrington, died in the mudslide, which left a square mile of mud and debris in a region she loved and lived in all her life. It carved a scar taller than the Washington Monument into the hillside.

By Tuesday night, emergency workers had recovered 16 bodies from the mire.

Hers was the first.

Mac McPherson is retired after having worked at a lumber mill and a maritime services company, in research vessels and boats off Alaska. After his rescue Saturday, he spent a few days in the hospital because the slide had damaged muscles in his legs, his daughter said.

Emergency workers were amazed, she said, that he escaped with a bump on his head but no broken bones. He is in seclusion with his extended family.

"He's physically doing pretty good," said Kate McPherson, a special education teacher. "But he lost the love of his life. They were married 46 years. Emotionally, he can't believe this is happening. He's going to have to start life all over again."

This is a bittersweet time for the McPhersons' daughter, who is relieved and grief-stricken in equal doses. She misses her mother desperately and cannot imagine life without her "sounding board ... a really great person."

But what her father did Saturday, she said, "is phenomenal. That he was able to survive and dig himself out … I really wish he'd been able to save her too. But at least I still have one parent."

In addition to Linda McPherson and 15 other victims whose bodies have been recovered from the slide, Travis Hots, chief of Snohomish County Fire District 21, told reporters late Tuesday that rescuers thought they had located eight more bodies.

Hots did not provide details, and refused to say that the death toll had climbed to 24. Sixteen bodies had been recovered, he said.

Authorities who had earlier pegged the number of missing or unaccounted for at 176 said that figure went "up and down" throughout Tuesday, as power was restored to Darrington and its residents began to call in. By nightfall, officials refused to give a number of missing but promised to have a better tally Wednesday morning.

Tuesday's rain made it even harder going for the more than 200 rescue personnel scouring the mud and slurry, using cadaver dogs and sometimes their hands to pick through the wreckage.

"We didn't find any signs of life; we didn't locate anybody alive," Hots told reporters. "Our condolences go out to the families that have lost people here."

Rescuers have found no survivors since Saturday, but have held out diminishing hopes for a miracle.

Hots described his awe at the tremendous wrath the mudslide brought down, smashing 49 homes. He had thought that if people were buried in their cars, rescuers could just dig out the cars and the people would be OK, he said. Instead, the vehicles were "twisted and torn up into pieces."

"It is just amazing, the magnitude and the force that this slide has created, and it's not just done that ¿to cars," Hots said. "It's done it to buildings, carpeting, photo albums … all this mud, that's heavy, very, very challenging."

Of all the help that has arrived along the Stillaguamish River since the mudslide, including the National Guard and dogs trained to find people and remains, one group stands out.

The state mortuary assistance team is in place and ready to work.

"There is a point at which you bring them in," John Pennington, director of the Snohomish County Department of Emergency Management, told reporters Tuesday morning. "This is that particular point."

Also Tuesday, officials added a painful soundtrack to the disaster, releasing the 911 tapes recorded shortly after the wall of mud slammed into tiny Oso, population about 200, and shut down State Route 530.

Obtained by Seattle-area KING-TV, the recordings convey some of the first glimpses of the terror and devastation that rocked this normally placid region.

"There's like a mudslide and everything's gone — the houses are gone," a breathless woman told the 911 service in Snohomish County.

As the dispatcher tried to calm her, the woman cried: "I got people here screaming for help.... They're in the middle of the mud. Oh my God."

One man called to say his wife had heard an "earthquake," and that hundreds of trees had collapsed around their home. She was hysterical.

Some of the first callers didn't seem to realize the scope of what had happened. One driver, sounding slightly amused, reported that the roof of a home or a barn seemed to have washed onto the highway. A woman who lived in the area said a whole house had washed onto the road.

They hadn't seen or heard any of the victims. Other callers had.

"There's so many people yelling for help," one woman told a dispatcher, her voice constricting with emotion as she stared at the wreckage. "Oh, my gosh. It stopped 100 feet from our house."

Another caller, a man, spoke in calm, polite tones.

"There's been a massive landslide on Highway 530 — massive," the caller said.

"Are there people having issues at all?" the dispatcher asked.

"I do, that's why I'm calling," the man answered, sounding distracted by the scene. "My neighbor's house, and their neighbor's house, have been completely taken out. It's collapsed on several of them and they're trapped."

"You know that they're inside the home, still?" the dispatcher said.

"Yes, I'm standing at the location right now, and I can — and I can hear them tapping underneath and yelling at us," the caller said. "There's several of them in a group under debris and the roof of the house."