SEATTLE - Wednesday marks the 42-year anniversary of Mt. St. Helens' eruption in Washington. The blast on May 18, 1980, is the worst volcanic eruption in U.S. history, killing 57 people and spewing 520 million tons of ash across the country.

When the mountain blew, a visitor to rhea park, William Dilley was camping with neighbors some nine miles from Mount St. Helens. They thought they were safe, but the cloud of ash and debris kept approaching, and Dilley watched it get closer and closer as they sped away.

"There were people camping just on the other side of us, and unfortunately, they didn’t make it," Dilley told FOX 13 Seattle during an interview in 2016. "When it came over the second ridge, I turned away because I didn’t want to see it coming."

360995 06: A cloud of ash covers a mountaintop May 22, 1980 in Washington State. On May 18, 1980, an earthquake caused a landslide on Mount St. Helens'' north face, taking off the top of the mountain and triggering an eruption that killed 57 people, wiped out river valleys and destroyed enough trees to build 300,000 homes. (Photo by John Barr/Liaison)

The collapse of the mountain’s top created the largest landslide ever recorded.

"If we had been in any other area 500 yards, either way, we would have been with the ghosts right now," said Dilley. "It was that close."

In 1980, Mt St. Helens' continued seismicity warned scientists at monitoring stations that the volcano might erupt, but the danger zone around the mountain turned out to be much too small.

"Saturday morning, there was an order on Governor Dixy Lee Ray’s desk to extend that danger zone," said author Steve Olson. "She was at a parade that weekend and did not sign the order. It was still waiting on her desk Monday morning after the eruption happened on Sunday." 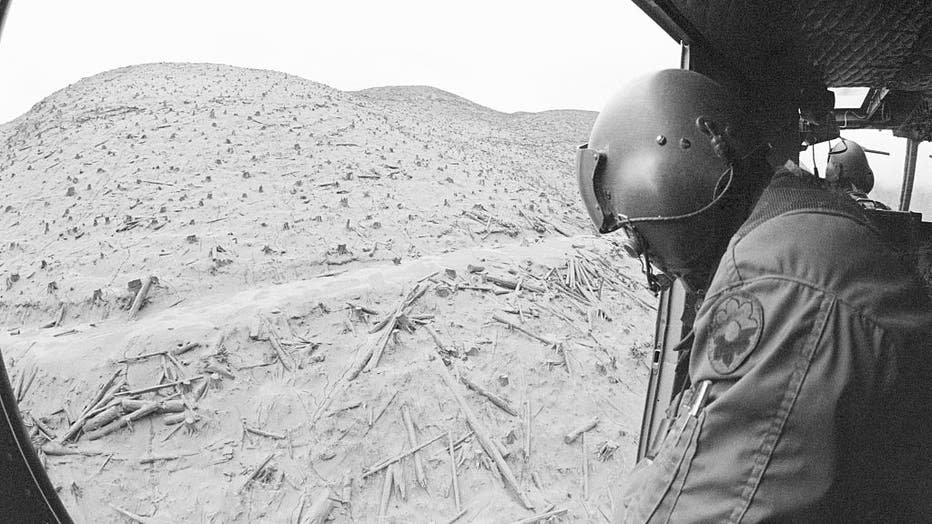 (Original Caption) 5/29/1980-Mount St. Helens, WA: An army helicopter crewman takes a last look at the desolation caused by the Mount St. Helens volcanic explosion 5/18 as it was announced that aerial searches for bodies are being suspended 5/29. Gro

‘Ash was raining from the sky’

Even for those who weren't directly in harm's way, the eruption left indelible memories.

Coni Carrothers was camping in Blewett Pass just east of the Cascades, and St. Helens exploded just as they were breaking down camp that morning.

"We heard a very loud boom -- we weren't sure what it was," she said. "As we drove back to (Ellensburg), we saw a strange, ominous cloud approaching. Birds were freaking out and slamming into brick walls. Then the warm ash fell."

Laura Landers was in first grade in 1980. "I remember seeing a huge mushroom cloud and folks likening it to an Atomic bomb," she said. "On the way home, ash started falling…. I remember the trees and road being coated in an eerie 'Gothlike' snow. The windshield wipers and ash made a muffled 'plop, plop, plop,' sound." 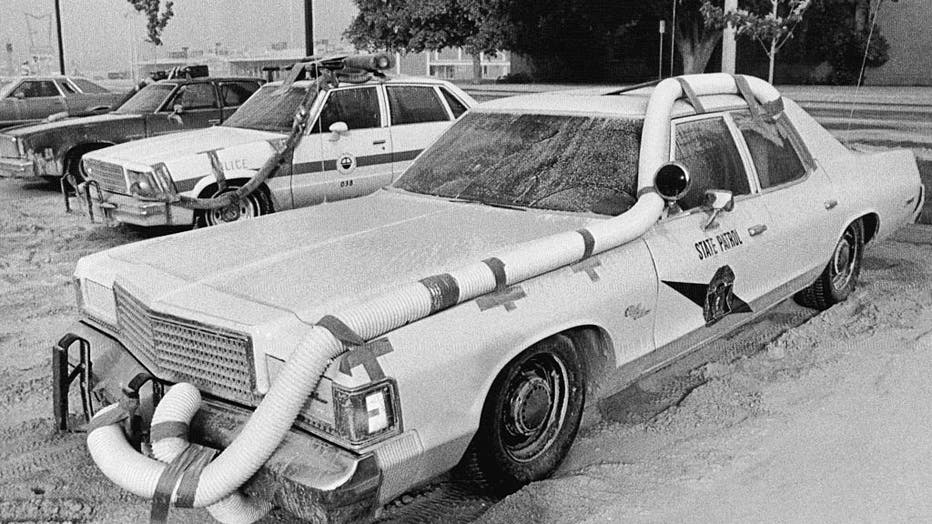 These State Police cars look like something from the moon as they are equipped with homemade air breathing devices to prevent volcanic ash from entering the engines. The vent tubes run from the engine to the interior of the auto where the air is at l

"I was still in bed that morning," said Klaus Pressler, who lived on Whidbey Island, north of Seattle. "For about a minute or two, I was fairly certain they had just dropped the bomb on Seattle."

"I recall as a child riding in the car on Highway 16 (south of Seattle) with my parents," said Lynnea Tweed, "and the sun was a reddish-orange while ash was starting to rain from the sky."

"I was living on Big Lake in Skagit County (north of Seattle)," Judy Houck told FOX Weather. "I had four kids with me to go fishing. When the eruption sounded, all across the lake the fish jumped out of the water at the same time about three feet out of the water!"

Not all heard the blast though:

"I was 15 years old and riding my bike to my grandmother's house in Parkland when the mountain blew," says Kim Carroll-Pederson. "I pulled over and watched the plume rise in the air.  What puzzled me was seeing something so massive, yet it was eerily silent."

The street lights came on as Mt. St. Helens darkened the sky.

Those in eastern Washington received the brunt of the ashfall as westerly winds carried the volcano's wrath their way.

Dionne Bell Miller was a kid in Spokane, and their family was playing in a park that afternoon when the ash from Mount Saint Helens made it into their part of the state.

"I remember very, very vividly how quickly darkness descended as the ash cloud came in from the west," Miller said. "I kept busy trying to rescue little sparrows that caught in the (the ash). I don't remember being successful."

"We heard the mountain blow," said Joyce Davies Jones, who lived in Ephrata in north-central Washington. "Walking home from church, we started feeling the ash drop. Soon it was darker than midnight, and we were stranded."

Leroy Hurley's trip for morning doughnuts in Yakima would be one he'd never forget.

"I saw this huge gray cloud in the western sky. Over the next few hours, the sky darkened, street lights came on, and very fine ash started to accumulate," Hurley said. "By noon, there was no visible sun, and it was pitch black."

He told FOX Weather ash made its way into his home through openings and covered everything inside. Outside, the ash was about 1/2-inch thick but very light. "Every time a car drove by, big plumes of ash were lifted into the air. It took several weeks for life to get back to normal." 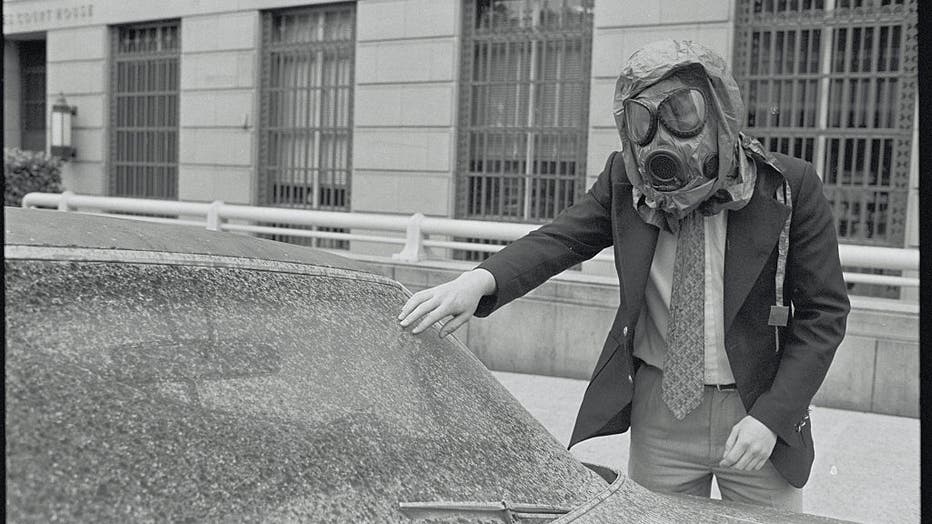 (Original Caption) "Dressed" for the Occasion". Portland, Oregon: Wearing a surplus Army gas mask, a young man looks at the volcanic ash on the windshield of a car as he walks through downtown Portland May 25. The ash is from the eruptions on Mt. St.

He said his car, parked outside for five months, would blow ash through every time the heat or air conditioning was engaged.

The ash would continue its journey east, spreading across the nation.

According to the Cascades Volcano Observatory of the USGS, significant ash falls occurred as far away as central Montana, and ash fell visibly as far eastward as the Great Plains – more than 930 miles away. A global event, the ash cloud spread across the U.S. in three days and circled the Earth in 15 days.

As witnessed from the hiking route on Monitor Ridge over the past 40 years, a new lava dome continued to re-form in the center of volcano’s crater.

"It’s by far the most dramatic thing that ever happened in this state," Olson said. "What Mount St. Helens taught us is that we have to take these threats seriously, and we have to prepare for them because they are going to happen."

Dilley rarely looks at the photographs from that day, and he hasn’t been back to Mount St. Helens in 35 years.

"Going through something catastrophic shows you how short life is and how precious things are. And for me, it’s Mount St. Helens."