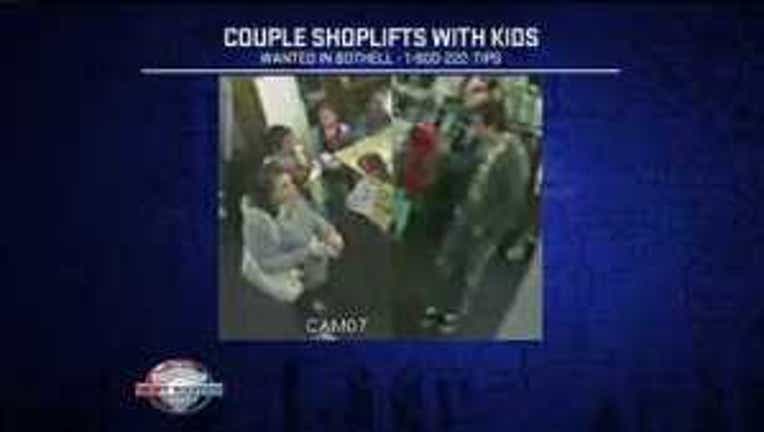 Renee Johannsen, the manager of 'Vision House Thrift Store' in Bothell, that helps homeless mothers and their children, says police caught a pair of shoplifters who’ve been stealing from their store. Johannsen says they called 911 when a mother, her 17 year old son and two young girls returned before noon on November 9th. Johannsen says they gave police the license plate number and a vehicle description and officers arrested them within 10 minutes. Johannsen says police went to the suspect’s home and recoveredmost of their stolen merchandise including six pieces of Franciscan china, some DVD’s, CD’s and toys. ---ORIGINAL CASE 10/26/12--- Police in Bothell say a woman is teaching her children a life of crime by stealing items from a thrift store directly in front of them – an incident caught on camera. Surveillance video at the Vision House Thrift Store shows the woman take fine china off a table and place it in her large purse. And every penny counts when you operate a thrift store for a non-profit. Vision House uses money from its thrift store to help homeless mothers and their children. But recently, a couple helped themselves to some of the merchandise -- six pieces of Franciscan china displayed on a table. "When I went up to take a picture of the table to put them on our Facebook (I noticed) that three of my place settings were missing, which I actually had them doubled. So that would mean six serving pieces missing," said store manager Renee Johannsen. "I thought this is very strange so I looked on the camera and watched and there was a woman in the store with a gentleman and two children and she had stolen the dishes off the table," she said. Video surveillance shows a woman take two sets of plates to a different part of the store to check them out, then place them in her large, white handbag. Then she places a black sweater over the china and scoops it all up. "I was shocked,” Johannsen said. "First of all, who does this with children with them? What kind of example are you setting? Plus, you're in here stealing from a non-profit organization that's trying to help and house homeless mothers and children," Johannsen said. "A case like this make me really mad,” said retired detective Myrle Carner with Crime Stoppers of Puget Sound. “You have a set of parents that should know better, that are teaching their kids how to shoplift." "I don't think this is the first time these suspects have been involved in a case like this. It's even more important to get them off the street before it happens again," Carner said. If you think you recognize the woman or her male accomplice, call an anonymous tip into: CRIME STOPPERS: 1-800-222-TIPS You must call the Crime Stoppers hotline with your tip to be eligible to receive the cash reward for information leading to a fugitive’s arrest. Click here for information on how to TEXT A TIP to Crime Stoppers