OLYMPIA, Wash. - Recreational Dungeness crab fisheries on the Washington coast south of the Queets River to the Columbia River are closed until further notice because of elevated marine toxin levels.

The closure area includes Grays Harbor and the popular Westport Boat Basin, according to the state Department of Fish and Wildlife.

The commercial Dungeness crab fishery is also closed and will be delayed until further notice in Washington coastal waters, Grays Harbor, Willapa Bay and the Columbia River. 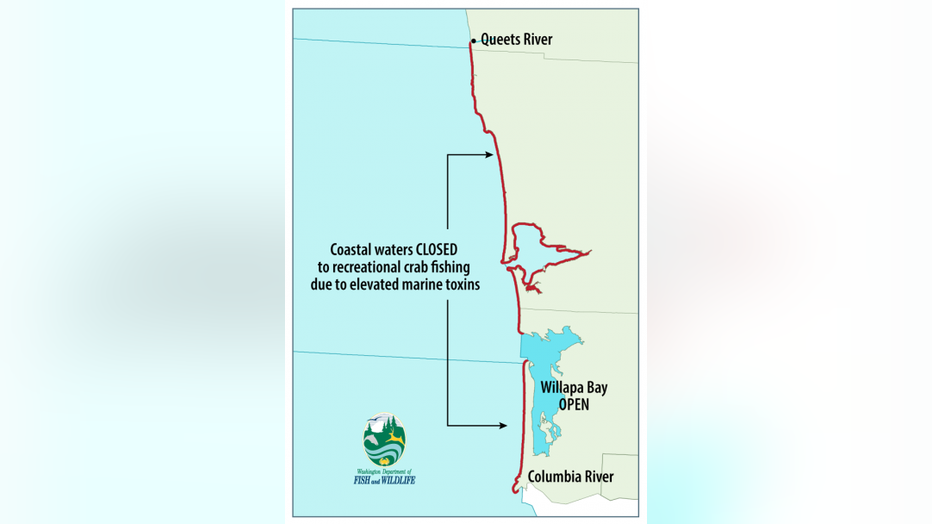 Levels of domoic acid have been increasing in coastal waters over recent months, said Dan Ayres, WDFW coastal shellfish manager. Earlier this season, the department closed all Washington coastal beaches to razor clam digging due to high levels of the toxin.

“Domoic acid just is not cutting us any breaks in recent weeks and months,” Ayres said. “Closing crabbing areas is not what we want to do right now, but safety has to be our first concern and amnesic shellfish poisoning is not something we or our colleagues at the Department of Health can take lightly.”

All sport crab gear must be removed from closed areas immediately or it will be subject to confiscation by Fish and Wildlife enforcement officers.

It's the first time since 2015 that a crab fishery has closed in Washington because of domoic acid.