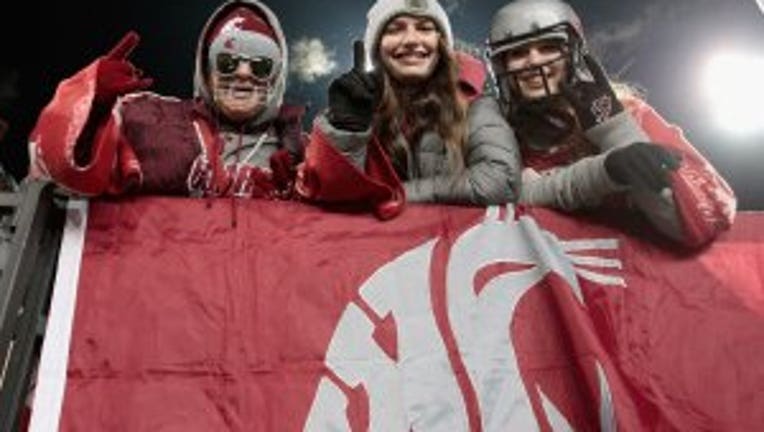 The winner of this year's Apple Cup, which will be played Friday in Pullman, will claim the Pac-12 North division. (Photo by William Mancebo/Getty Images)

When the Huskies and Cougars play football, championships are decided.

At least that’s how it’s been lately.

For the third consecutive season, the Pac-12 North title will be on the line in the Apple Cup, when No. 7 Washington State hosts No. 16 Washington on Friday in Pullman. The game will kickoff at 5:30 p.m. and be broadcast on Q13 Fox.

WSU enters with a 10-1 record after rolling over the Arizona Wildcats 69-28 on Saturday.

It’s coach Mike Leach’s first 10-win season with the Cougars and the program’s first since 2003.

Leach acknowledged the accomplishment after the win over Arizona but made it clear where the team’s focus will be this week.

“We’re excited about it for a night,” he told the Associated Press. “Tomorrow we start preparing for the next one.”

That next one will be at home against the Cougars’ in-state rival, a team that has defeated WSU five years in a row and knocked the Cougars out of the Pac-12 title game the past two seasons.

Washington went on to beat Colorado to win the conference and earn a trip to the College Football Playoff.

Last year, UW played spoiler, defeating the Cougars in Seattle 41-14. WSU would have won the North with a win, but instead Stanford represented the division against USC in the title game.

Whichever team wins this year will claim the division and play Utah, who clinched the South Division with a win over Colorado on Saturday and loss by Arizona State.

That game will be Nov. 30 at Levi’s Stadium in Santa Clara and also be broadcast on Q13 Fox.

Huskies quarterback Jake Browning was asked after UW beat Oregon State 42-23 on Saturday if he had any extra motivation to beat WSU with the division title on the line.

“I think I would want to beat them regardless,” he told the AP. “It’s a good situation to be in, but I’m not going to prepare harder because there’s more on the line.”

Ultimately, he summed it up succinctly.

“We want to beat the Cougs,” he said.

A sentiment no doubt shared by the Cougars about the Huskies on rivalry week.

The Past Three Apple Cups: