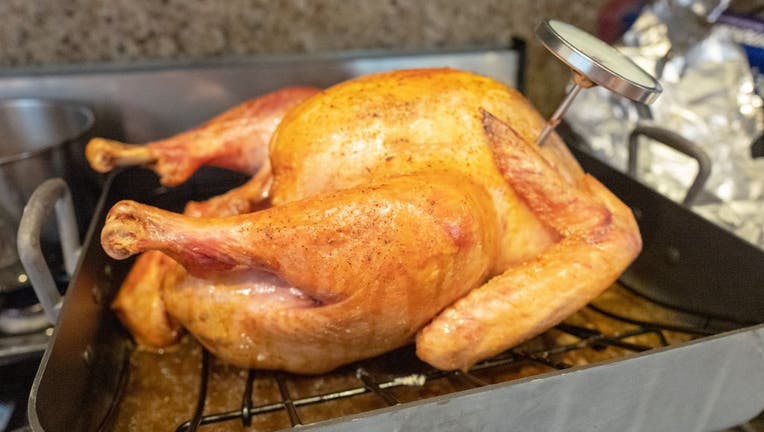 FILE - Cooked turkey in roasting pan with meat thermometer during the preparation of a traditional American Thanksgiving holiday meal.

LOS ANGELES - As the COVID-19 pandemic continues, more and more people are choosing to scale back their Thanksgiving Day meals.

In October, the U.S. Centers for Disease Control and Prevention released Thanksgiving guidelines that advised against larger family gatherings and travel over the holiday season.

The nation is averaging 172,000 new virus cases per day, nearly doubling since the end of October, according to Johns Hopkins University. Hospitalizations, deaths and the test positivity rate are also up sharply as the nation approaches Thanksgiving.

Many are undoubtedly heeding public health advice — downsizing Thanksgiving plans, avoiding get-togethers, wearing masks when they’re around people who don't live with them — and it has led to a surge in demand for smaller turkeys.

“There are two issues at play here,” Sophie Mellet-Grinnell, a meat and poultry specialist at Baldor Specialty Foods, which sells fresh turkeys, told FOX Business in October. “First, the COVID-19 pandemic caused universal slowdowns — and in some cases complete shutdowns — in the nation’s poultry processing plants, drastically limiting supply. Secondly, with people gathering for holidays in fewer numbers, the demand for smaller birds has skyrocketed. That means there’s going to be a run on small to modest-sized turkeys this season.”

According to a survey conducted by big names in selling fresh turkey like Butterball, Hormel Foods and Kroger, many consumers are planning to scale down Thanksgiving festivities to only immediate family. As a result, farmers and stores are trying to deliver smaller birds.

Butterball found people still want to celebrate Thanksgiving, despite the changes that must be made. According to the survey:

Overall, turkey sales at retailers have been up this year, according to the National Turkey Federation. The industry trade group expects demand and sales to remain strong throughout the holiday season.

“We are anticipating that turkey sales and demand will be strong this year as many families prepare the holiday meal at home. While we know that celebrations may be smaller or even virtual, the size of the turkey families will pick is a little harder to predict. We have certainly heard of interest in smaller turkeys or turkey breasts, but at the same time, we have heard from many consumers and retailers that traditional sized turkeys are popular as well,” according to a spokesperson with the National Turkey Federation.

David Jaindl, owner of Jaindl Farms and one of the leading producers of whole turkey retail, confirmed that more and more people are opting to buy smaller turkeys this year.

And while he cannot speak for every single turkey producer in the U.S., Jaindl said he keeps a pretty sharp eye on trends in the industry and is seeing the demand for smaller turkeys going up for all retailers.

Jaindl even said that business was doing better than usual, despite the ongoing pandemic.

“It’s pretty much business as usual. The higher sales are attributed to a lot of families who normally go out to dinner or to their local country club for Thanksgiving and they’re actually cooking at home this year,” he said.

“We grow about 800,000 turkeys each year and sell about 400,000 each year for Thanksgiving,” Jaindl continued. “We are well on our way to that same projection and we even grew an extra 50,000 turkeys anticipating the larger need for the holidays and it worked out great.”