SEATTLE -- If you've made your way to downtown Seattle in the past three weeks, you've likely spotted a green or orange bike.

You'll soon see many, many more.

Spin, a bike share company that opened July 7, has 500 orange bikes in Seattle. By Aug. 7, the company will double the number of bikes on the streets. In September, they'll double again to have 2,000 bikes, co-founder Derrick Ko said.

LimeBike, another bike share company, is planning to have the same amount by mid-September.

Four thousand rent-a-bikes will be available in all.

"We want to be in every neighborhood," Ko said. "With 500 bikes it's not enough. We want to cover the whole city, and make bike shares an option for everyone."

LimeBike's General Manager in Seattle Daniel Stone said the company saw more than 10,000 rides in their first week of operation. Ko said Spin has seen thousands of rides - including 5,000 in the first week. And the $1-per-half-hour companies keep growing.

"We really want to put more bikes on the street," Ko said. "That's what everyone has been clamoring for."

The hope is to cover new neighborhoods further from downtown, LimeBike's Daniel Stone said. People outside of the downtown core want access to bikes, and with the new additions, they'll likely get it.

"Our expansion will be a big boost, and it will satisfy our need," Stone said.

There have been hiccups.

On Wednesday, a Q13 News staffer found a bike in an odd location -- in the middle of Lake Union. 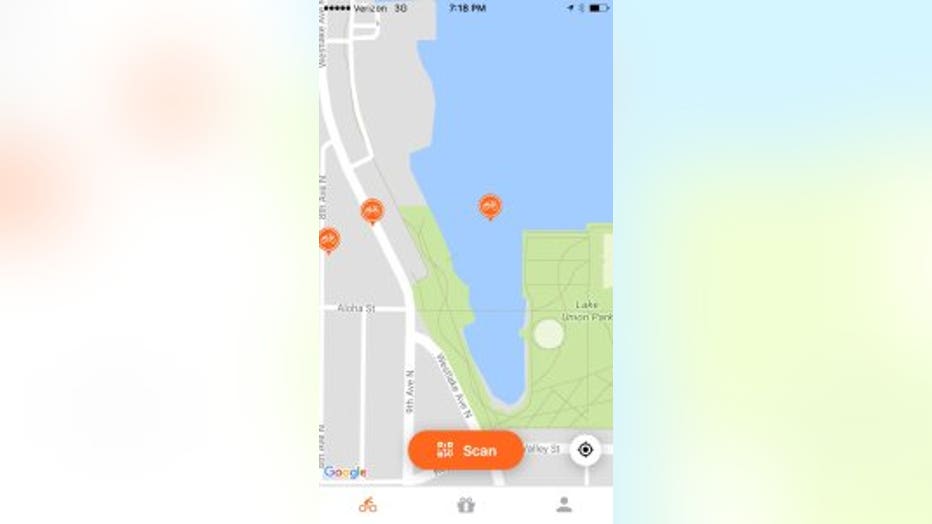 Some have also reported finding bikes in trees.

Ko said they have seen some acts of vandalism, and at least one bike was reported found with a little seaweed on it. But for the most part, people have respected the companies and their mission.

Ko talks with city officials regularly, he said, and there have been few complaints from a policy standpoint.