A NASA spacecraft got closer to Jupiter and its moon than ever before and captured some images.

LOS ANGELES - Stargazers are in for a dazzling weekend as the moon appears close to Saturn and Jupiter this weekend in a celestial event called an appulse.

An appulse occurs when two or more astronomical objects appear close to one another in the sky. The celestial phenomenon kicks off on Friday with the appearance of July’s full moon, the buck moon.

Then, on July 24, the moon will move four degrees south of Saturn in the dawn sky. Both the moon and Saturn will be visible together in the constellation Capricornus.

RELATED: Buck moon: When to see July 2021’s full moon and why it may look red 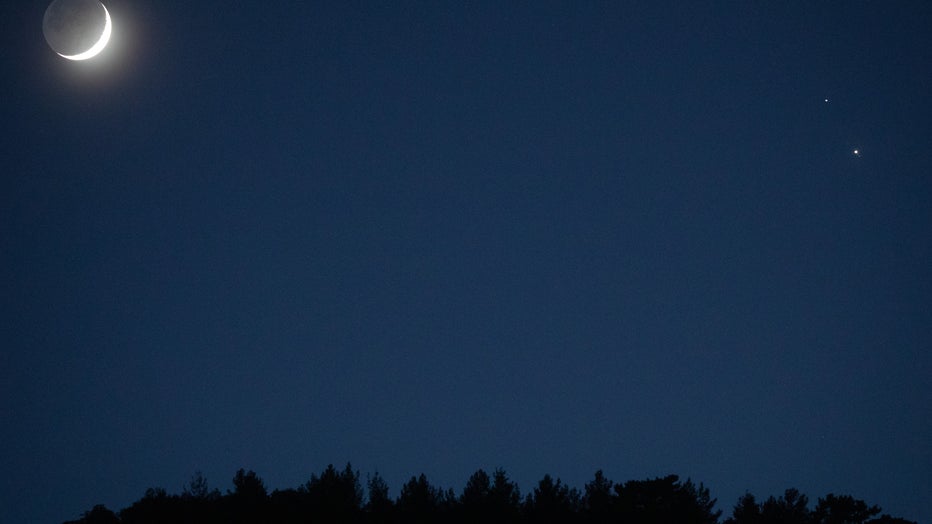 A crescent moon (L) is seen with Saturn (upper right) and Jupiter (lower right) ahead of their closest visible conjunction on December 17, 2020 in Antalya, Turkey. On December 21, a Jupiter and Saturn conjunction will form a rare "double planet" for (Photo by Chris McGrath/Getty Images)

The moon will travel four more degrees south and align with Jupiter on June 25. Similar to the moon’s alignment with Saturn on Saturday, the moon will appear near Jupiter on Sunday morning near dawn.

Viewers can observe the moon and Jupiter with the naked eye or a pair of binoculars in the constellation Aquarius.

Due to 13 wildfires raging in western states, a layer of haze and smoke may obstruct or distort the night sky this weekend.