From Clare Farnsworth of Seahawks.com

Seahawks QB Russell Wilson vs. Saints QB Drew Brees: No one-on-one matchup here, just the one matchup that plays most directly into who emerges as the top seed in the NFC as the regular season moves into its final four games. Brees has put the ball up 439 times already, with only the Lions’ Matthew Stafford (465), Broncos’ Peyton Manning (445) and Falcons’ Matt Ryan (443) throwing more passes entering Week 13. Wilson, meanwhile, is doing whatever’s needed to just win, baby. He is 13-0 at CenturyLink Field and his 21-6 record since joining the Seahawks as a third-round draft choice last year gives him the highest winning percentage (.778) of any active QB in the league. Then there’s the whole “too-small” connection and the fact that Wilson has used Brees as a role model for how to approach the game even more than how to play the game. 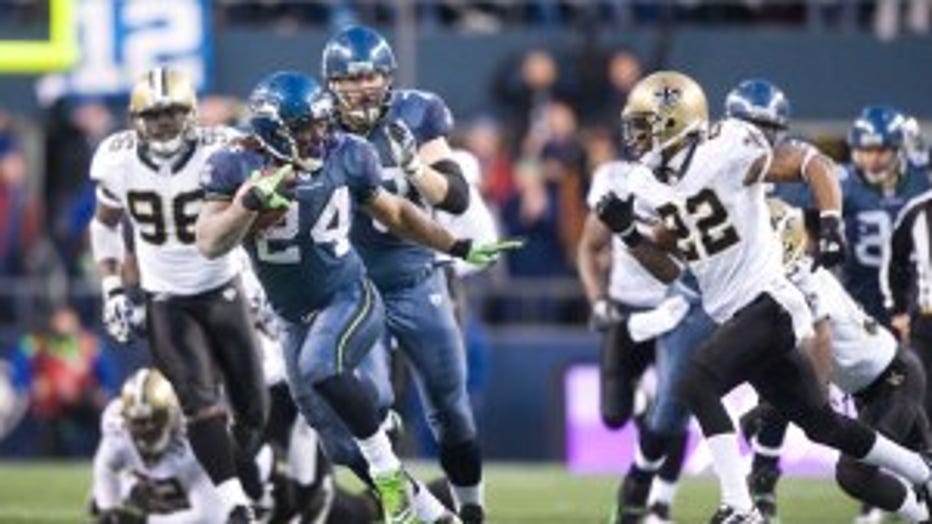 Seahawks No. 2-ranked pass defense vs. Saints TE Jimmy Graham: Without right cornerback Brandon Browner (groin injury) and backup Walter Thurmond (suspended), the Seahawks are stretching the next-man-up mantra fiber-option thin as Byron Maxwell steps in for Browner and Thurmond on the right side and Jeremy Lane takes over for Thurmond as the nickel back. But containing the 6-foot-7, 265-pound Graham is going to be a full-unit task anyway. It will start with Chris Clemons and Cliff Avril, among others, being able to apply pressure on Brees. It will continue with SS Kam Chancellor, LBs Bruce Irvin, K.J. Wright and Bobby Wagner and even CB Richard Sherman matching up against Graham. It also will involve FS Earl Thomas helping out. It needs to end with the Seahawks having the same kind of success they did against the Falcons’ Tony Gonzalez (three catches for 29 yards) and 49ers’ Vernon Davis (three for 20).

Seahawks FS Earl Thomas vs. Saints S Kenny Vaccaro: The eyes of Texas, as well as the rest of the football nation, will be upon this pair of former Longhorns. Vaccaro was the 15th pick overall in this year’s NFL Draft. Thomas was the 14th pick overall in the 2010 NFL Draft. Vaccaro is third on the Saints’ defense with 68 tackles. Thomas leads the Seahawks with 75. Vaccaro has one interception. Thomas is tied for second in the NFL with four. But Thomas also has been voted to the Pro Bowl the past two seasons and was voted All-Pro last season. Suffice it to say, the former Longhorn safety who has a greater impact on the game will help determine which team wins the game.

The Saints’ No. 14-ranked run defense vs. Seahawks RB Marshawn Lynch: OLB Junior Galette, ILB Ramon Humber and S Roman Harper are the only Saints left from the 2010 defense that Lynch went over, around and through on his electrifying 67-yard touchdown run to ice the Seahawks’ wild-card playoff victory at CenturyLink Field. And only Galette is starting for new defensive coordinator Rob Ryan. But everyone has seen what transpired on the run that helped eliminate the defending Super Bowl champions in the first round, and against a Seahawks team that won its division with a 7-9 record. As Saints coach Sean Payton said this week, “I didn’t need to go back and watch it. It was probably shown for a good month on every type of highlight film.” This season, Lynch is fourth in the NFL with 925 yards and averaging 4.4 yards per carry. The Saints are allowing averages of 111.9 rushing yards per game and 4.8 yards per carry.

The Saints lead the regular-season series 6-5, including victories in the past two meetings – 28-17 in Seattle in 2007 and 34-19 in New Orleans in 2010. But the Seahawks won the last meeting, that 41-36 victory in the wild-card playoff game after the 2010 season. … As good as the Seahawks have been in games before their bye weeks (19-6), they’re 6-18 in games the week after their bye. … Brees has a nine-game winning streak on “Monday Night Football,” when he’s completed 71.8 percent of passes (224 of 312) for 2,880 yards, with 28 TD passes and five interceptions, for a 123.6 passer rating. … Wilson is 2-0 on “Monday Night Football,” with a 107.7 passer rating. … Graham leads all NFL tight ends in receptions (65), receiving yards (946) and TD catches (11). … The Seahawks’ Golden Tate is the only player in the NFL with 600 receiving yards and 400 punt return yards. … The Seahawks lead the NFL with 26 takeaways and share the lead with 16 interceptions. … They are 24-3 under Carroll when winning the turnover battle. … ILB Curtis Lofton leads the Saints with 96 tackles, while fellow ILB and former Seahawks’ leading tackler David Hawthorne is second with 82.