The Rev. Bernice King, who leads The King Center in Atlanta, said leaders — especially politicians — too often cheapen her father’s legacy into a "comfortable and convenient King" offering easy platitudes.

"We love to quote King in and around the holiday. ... But then we refuse to live King 365 days of the year," she declared at the commemorative service at Ebenezer Baptist Church, where her father once preached.

The service, sponsored by the center and held at Ebenezer annually, headlined observances of the 38th federal King holiday. King, gunned down in Memphis in 1968 as he advocated for better pay and working conditions for the city’s sanitation workers, would have celebrated his 94th birthday Sunday. 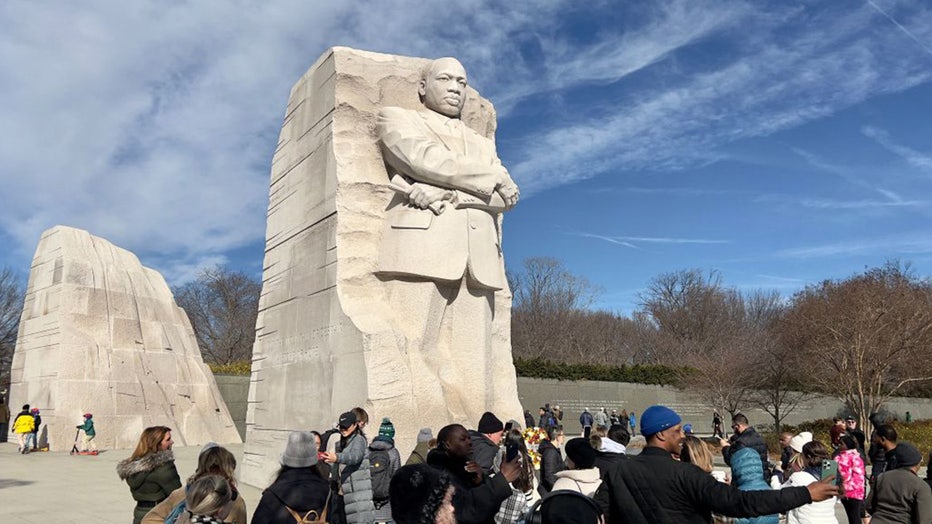 "He was God’s prophet sent to this nation and even the world to guide us and forewarn us. ... A prophetic word calls for an inconvenience because it challenges us to change our hearts, our minds and our behavior," Bernice King said. "Dr. King, the inconvenient King, puts some demands on us to change our ways."

President Joe Biden was scheduled Monday to address an MLK breakfast hosted in Washington by the Rev. Al Sharpton’s National Action Network. Sharpton got his start as a civil rights organizer in his teens as youth director of an anti-poverty project of King’s Southern Christian Leadership Conference. 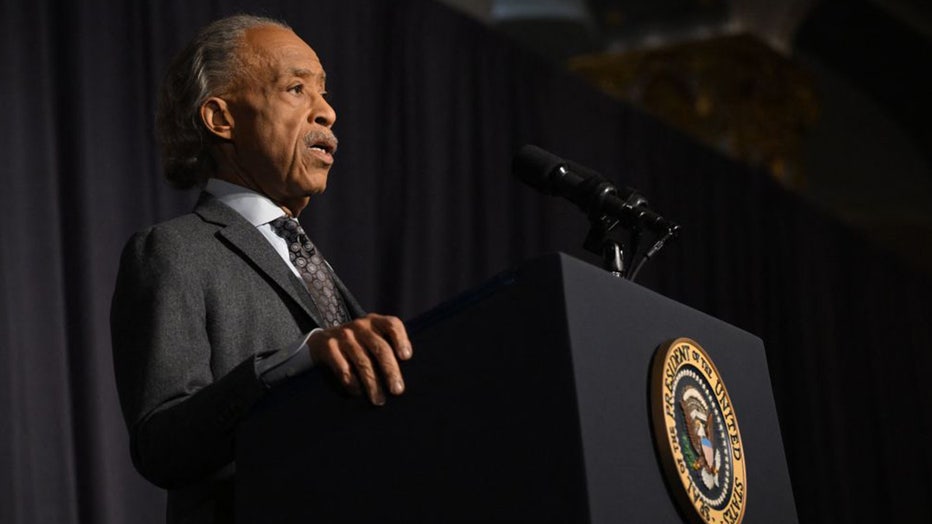 "This is a time for choosing," Biden said, repeating themes from a speech he delivered Sunday at Ebenezer at the invitation of Sen. Raphael Warnock, the senior pastor at Ebenezer who recently won re-election to a full term as Georgia’s first Black U.S. senator.

"Will we choose democracy over autocracy, or community over chaos? Love over hate?" Biden asked Monday. "These are the questions of our time that I ran for president to try to help answer. ... Dr. King’s life and legacy — in my view — shows the way forward."

Other commemorations echoed Bernice King’s reminder and Biden's allusions that the "Beloved Community" — Martin Luther King's descriptor for a world in which all people are free from fear, discrimination, hunger and violence — remains elusive. 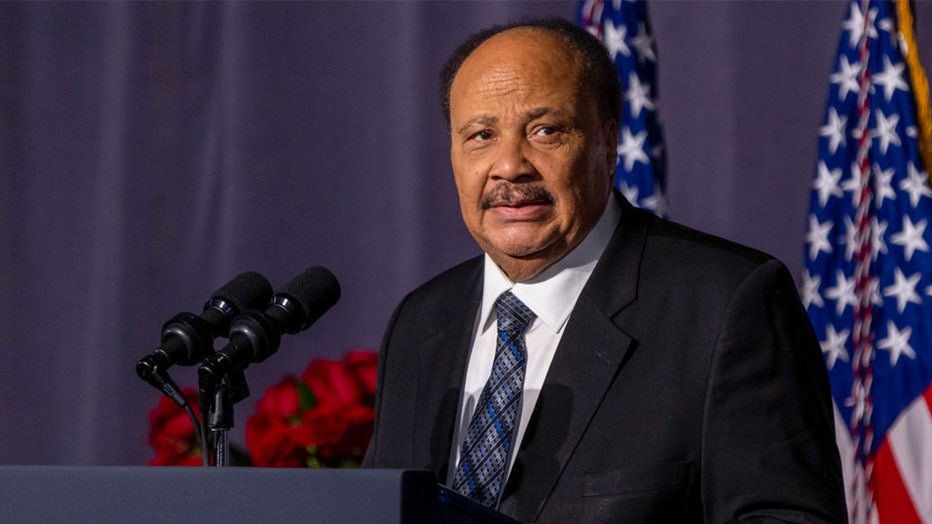 In Boston, Mayor Michelle Wu talked about a fight for the truth in an era of hyper-partisanship and misinformation.

"We’re battling not just two sides or left or right and a gradient in between that have to somehow come to compromise, but a growing movement of hate, abuse, extremism and white supremacy fueled by misinformation, fueled by conspiracy theories that are taking root at every level," she said.

Wu, the first woman and person of color elected mayor of Boston, said education restores trust. Quoting King, she called for overcoming the "fatigue of despair" to enact change. "It is sometimes in those moments when we feel most tired, most despairing, that we are just about to break through," Wu told attendees at a memorial breakfast.

Volunteers in Philadelphia held a "day of service" focused on gun violence prevention. The city has seen a surge in homicides that saw 516 people killed last year and 562 the year before, the highest total in at least six decades.

RELATED: Slavery reparations: How the US can follow one town's effort to right dark past

Some participants in the effort’s signature project, led by Children’s Hospital of Philadelphia, worked to assemble gun safety kits for public distribution. The kits include "gun cable locks and additional safety devices for childproofing," according to organizers. They also include information about firearm storage, health and social services information, and coping in the aftermath of gun violence.

Other kits being assembled highlighted Temple University Hospital’s "Fighting Chance" program and included materials to enable immediate response to victims at the scene of gunfire, organizers said. Recipients are to be trained in the use of the materials, which include tourniquets, gauze, chest seals and other items to treat critical wounds, they said.

In Selma, Alabama, a seminal site in the civil rights movement, residents were commemorating King as they recover from a deadly storm system that moved across the South last week.

King was not present at Selma's Edmund Pettus Bridge for the initial march known as "Bloody Sunday," when Alabama state troopers attacked and beat marchers in March 1965. But he joined a subsequent procession that successfully crossed the bridge toward the Capitol in Montgomery, punctuating efforts that pushed Congress to pass and President Lyndon Johnson to sign the Voting Rights Act of 1965.

The Pettus Bridge was unscathed by Thursday’s storm. 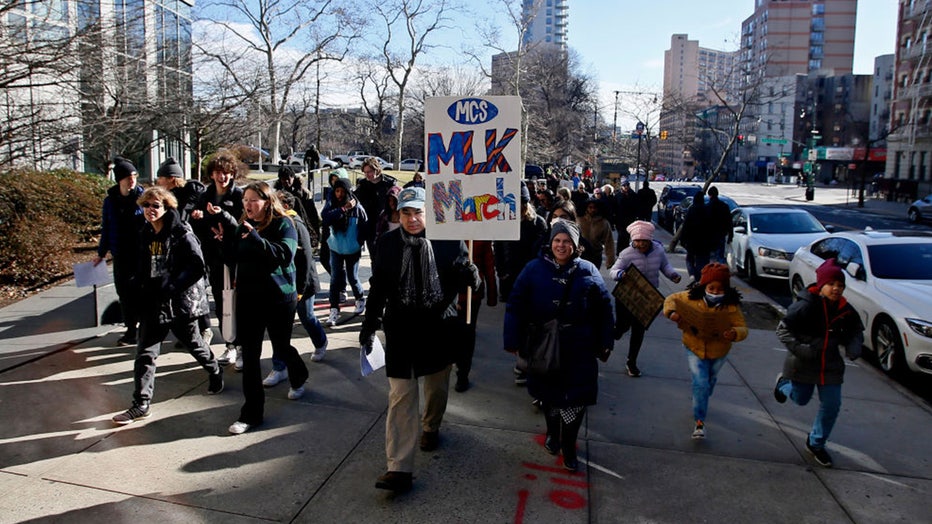 "His unshakable faith, powerful nonviolent activism and his vision for peace and justice in our world altered the course of history," Rachel Talbot Ross said in a statement. Talbot Ross is also the daughter of Maine’s first black lawmaker, and a former president of the Portland NAACP.

"We must follow his example of leading with light and love and recommit ourselves to building a more compassionate, just and equal community," she added.

At Ebenezer, Warnock, who has led the congregation for 17 years, hailed his predecessor’s role in securing ballot access for Black Americans. But, like Bernice King, the senator warned against a reductive understanding of King.

"Don’t just call him a civil rights leader. He was a faith leader," Warnock said. "Faith was the foundation upon which he did everything he did. You don’t face down dogs and water hoses because you read Nietzsche or Niebuhr. You gotta tap into that thing, that God he said he met anew in Montgomery when someone threatened to bomb his house and kill his wife and his new child."

King, Warnock said, "left the comfort of a filter that made the whole world his parish," turning faith into "the creative weapon of love and nonviolence."

While echoing Bernice King’s call for bolder public policy, Warnock noted some progress in his lifetime. As he's done through two Senate campaigns, Warnock noted he was born a year after King’s assassination, when both of Georgia senators were staunch segregationists, including one Warnock described as loving "the Negro" as long as he was "in his place at the back door."