Pierce County Sheriff's deputies say Shantel Holznagel was found last night by the King County Sheriff’s Office at grocery store.  Initially, she gave a fake name to the deputy and then said she did not want to go home. She is no longer considered a missing person.

Pierce County sheriff’s detectives need help to solve the disappearance of Shantel Holznagel. She has been missing for two months and is feared to be a victim of foul play.

Holznagel's family reported her missing last week. On Aug. 9, she reportedly messaged that she needed help and has not been heard from since.

Holznagel is 29 years old, 5' 7" tall, 150 pounds with brown hair and brown eyes. She has several tattoos including the word "Angel Face" on her back and an image of a diamond on her left ankle.

Crime Stoppers of Tacoma-Pierce County is offering a cash reward of up to $1,000 for information leading to the arrest and charges filed in this case.  Submit an anonymous tip using the P3 Tips App on your phone or by calling 1-800-222-TIPS (8477). You can also go to http://www.P3Tips.com. 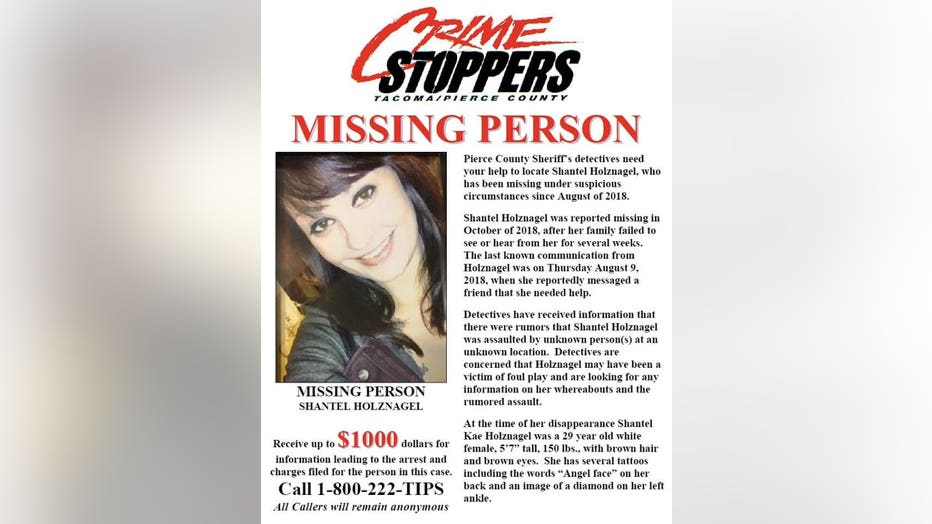