Chunk, a three-year-old golden retriever who had been missing for two weeks, was reunited with his owners Tuesday morning after New Jersey State Troopers pulled him from the waters of Barnegat Bay.

POINT PLEASANT, N.J. - A dog that had been missing for two weeks has been reunited with his owners after a water rescue conducted by New Jersey State Police Tuesday morning.

State Police say Troopers Ryan Koehler and Vincent Ferdinandi, of Point Pleasant Station, were preparing for their shift when they received a report of a dog swimming in Barnegat Bay.

The troopers headed out to the scene in a boat and found Chunk, a golden retriever, swimming near the Mantoloking Bridge. They were able to bring Chunk safely to shore.

Once ashore, they learned that Chunk had been reported missing out of Brick, New Jersey back on June 6.

After the rescue, New Jersey State Police shared photos of the three-old-dog after he was reunited with his owners.

"I'm just over the moon. I'm just so happy to have him back," owner Marie Zangara told FOX 29.

The beloved dog took off from Jim and Marie Zangara back on June 6 while playing on the beach at F- Cove in Brick Township where they had docked their boat.

"I think he's exhausted from his ordeal. He lost 20 pounds," Jim said. 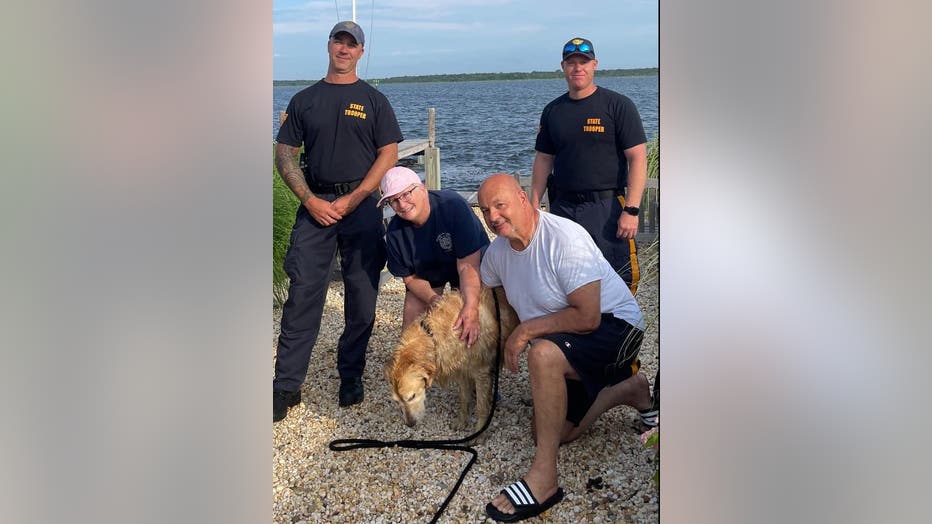 Chunk, a three year old golden retriever, was reunited with his owners two weeks after he was reported missing and New Jersey State Police pulled him from the waters of Barnegat Bay.

'Stop and think': Police warn trespassers against visiting home from Mare of Easttown