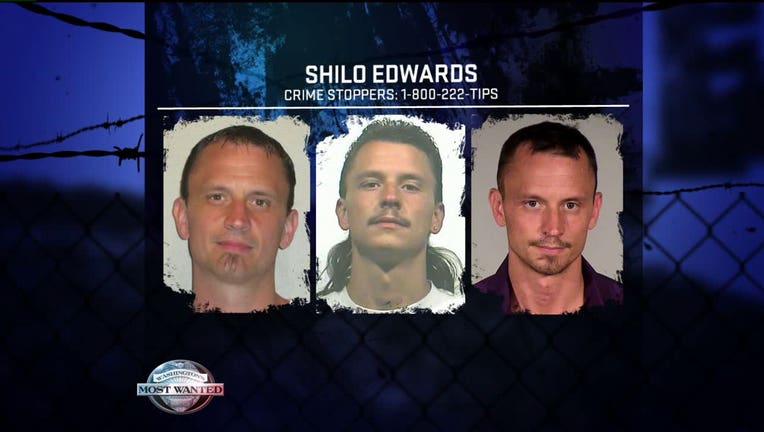 FUGITIVE CAPTURED Jan. 15, 2014 -- The Department of Corrections says Shilo Edwards was arrested in Milton during a traffic stop. WANTED BY DOC IN KING COUNTY July 26, 2013 -- The Department of Corrections said Shilo Edwards is a long-time criminal --  a big mixed-bag of bad -- who is now missing. A high-risk child predator, Edwards is also a Level 3 sex offender who has been convicted of sexually molesting a 4-year-old girl. Edwards is also breaking probation in King County for drugs and the beating and robbery of a 90-year-old man. "Edwards and his female friend went and spoke with the elderly owner of a nursery about buying a plant. One of them handed him $20, and as soon as the owner opened up his wallet, Edwards attacked him. He punched the owner in the chest multiple times, causing several abrasions and injuries to his ribs. Edwards also stole his wallet, keys and his cell phone," Christina Lacy with the Department of Corrections said. Here's the rest of Edwards' rap sheet: Assault, stealing, identity theft, obstruction and illegally using a weapon to intimidate someone. Officers said Edwards is a heavy meth user and fuels his habit by stealing cars, burglarizing homes and making fake IDs. Shilo Edwards is 33-years-old. He has a ton of tattoos, including a dragon on his upper right arm and several scars all over his body. Officers said they've seen him become violent and resist arrest before -- and they know he likes to carry knives. If you spot this missing child predator, stay away and call Crime Stoppers at 800-222-TIPS. You can also text a tip here.