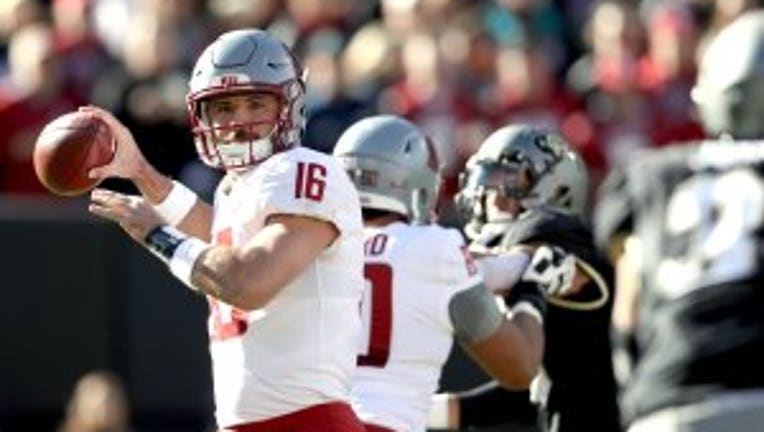 BOULDER, Colo. — The 10th-ranked Washington State Cougars weren't in any hurry to bury the Buffaloes.

Gardner Minshew II had all day to pick his targets and he overcame a slow start and three fourth-down failures to lead the Cougars past Colorado 31-7 on Saturday.

The Cougars (9-1, 6-1 Pac-12, No. 8 CFP) won their sixth straight, but it wasn't as easy as expected against the Buffaloes (5-5, 2-5), who lost their fifth straight despite the return of star receiver Laviska Shenault Jr.

Washington State led by three at the half and seven heading into the fourth quarter.

They did dominate the clock, however, winning the time of possession by nearly 24 minutes and holding the Buffaloes to an average drive of just 1:38.

"We hogged the ball the whole game," Cougars coach Mike Leach said. "But I thought we could have capitalized on more stuff."

"Our defense was getting them off the field really fast, so hats off to them for getting us the ball," Minshew said.

Washington State led just 10-7 at the break but linebacker Jahad Woods forced and recovered Travon McMillian's fumble at the Colorado 32 on the second play of the second half and Minshew threw a 1-yard dart to Renard Bell, sparking a 21-0 run that finally buried the Buffs.

Minshew, who was hardly pressured all afternoon as Colorado failed to register a single sack for the first time all season, finished 35-of-58 passing for 335 yards and two TDs.

"I was off a little bit but I feel like we figured it out in the second half," said Minshew, who made it 24-7 on a 10-yard scramble in the fourth quarter on a drive was kept alive when Buffs safety Aaron Maddox was flagged for taunting Easop Winston on a key third down stop.

"That was all on me," Maddox said. "I promise you that won't happen again."

In the first half, Minshew didn't look anything like the nation's leading passer that he is.

After having to burn a timeout before the first snap of the game and another one before the first quarter ended with Washington State still scoreless, the Cougars finally got on the board with a 39-yard field goal.

They caught a huge break when linebacker Nate Landman, the Buffs' leading tackler, was ejected for targeting after stuffing Minshew for no gain on a second-and-1 keeper in the second quarter. Minshew ran around his left tackle and was ducking when Landman hit him.

"It was a good hit," Minshew said. "But it was a penalty. We're trying to keep players safe and that's what we're doing is throwing a flag when that happens."

"Losing Nate's a tough blow," Colorado coach Mike MacIntyre said. "Some of the mistakes we had underneath, he would have made" those plays.

Without Landman, who was also ejected Oct. 6 against Arizona State, the Buffs couldn't stop the Cougars from taking a 10-7 halftime lead on running back Max Borghi's 28-yard catch and run .

Despite their defense holding an opponent scoreless in the first quarter for the fifth straight game , the Buffs didn't capitalize as much as they could have. They only crossed midfield once in their seven first-half possessions, and that came on McMillian's 64-yard scamper to the 3. He ran it in on the next play for a 7-0 lead.

Colorado QB Steven Montez threw for just 67 yards in the first half and finished 20 of 35 for 199 yards and no touchdowns.