By afternoon several flood advisories were posted for many rivers, creeks and streams from Everett to Toledo, Wash.

Closer to Seattle, both the Skykomish and Snoqualmie rivers were under flood warnings. King County officials said road closures were expected within hours.

The National Weather Service in Seattle tweeted at about at about 4:30 p.m. that minor flooding was occurring on the Skokomish River in Mason County, the Snoqualmie River in King County and the Skykomish and Stillaguamish rivers in Snohomish counties.  It added that flooding on other rivers in King, Snohomish and Skagit counties was possible.

The flow of water going through the county’s river gauges tripled along the Snoqualmie River in about an hour Thursday morning. 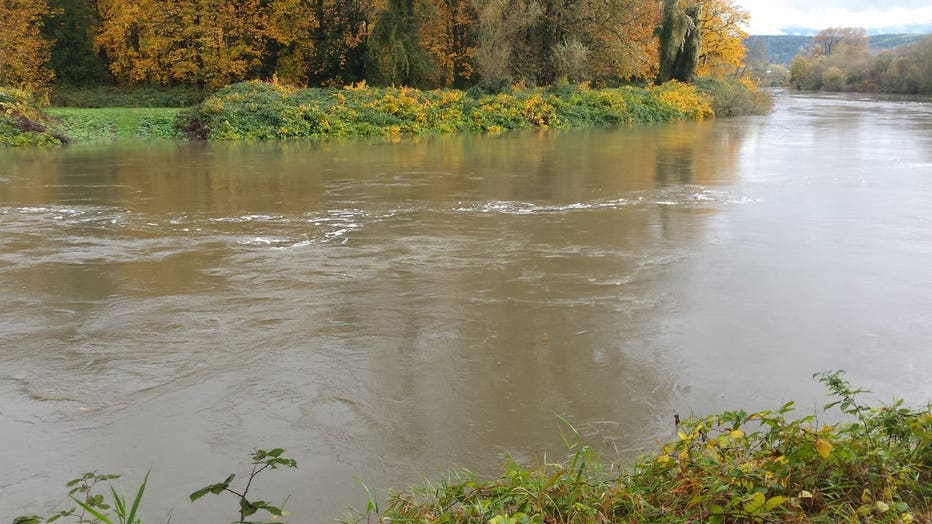 The swollen Snoqualmie River on Thursday morning.(Photo courtesy of Sol to See Farm in Carnation)

Snoqualmie Falls gushed with runoff rain water from the mountains.

The river was running quick by afternoon. Large amounts of debris in Snoqualmie River could be seen floating downstream.

County officials said people should be prepared for road closures in the area.

“There should be some road closures coming up,” said Doug Williams with King County. “Remember that driving through flood waters is the number one cause of death in a flood event. When the road closed signs come up you need to adhere to those signs and avoid driving through standing water.”

While county officials don’t expect any significant rainfall in the near future, the flood alert could be in effect until late Friday morning.