Sydney Raley, 15, talks with FOX Television Stations about jumping through a McDonald's window to save a choking customer.

EDEN PRAIRIE, Minn. - A 15-year-old McDonald’s employee is being called a hero after jumping out of a drive-through window to save a choking customer.

Police in Eden Prairie, Minnesota, said Sydney Raley was working at the local fast-food restaurant’s drive-through when she noticed the customer coughing profusely on Dec. 18.

"But I noticed that she was coughing like unnaturally a lot," Raley told FOX Television Stations. "I looked at her daughter, who was in the passenger seat of the car, and her eyes were just like wide with shock and fear." 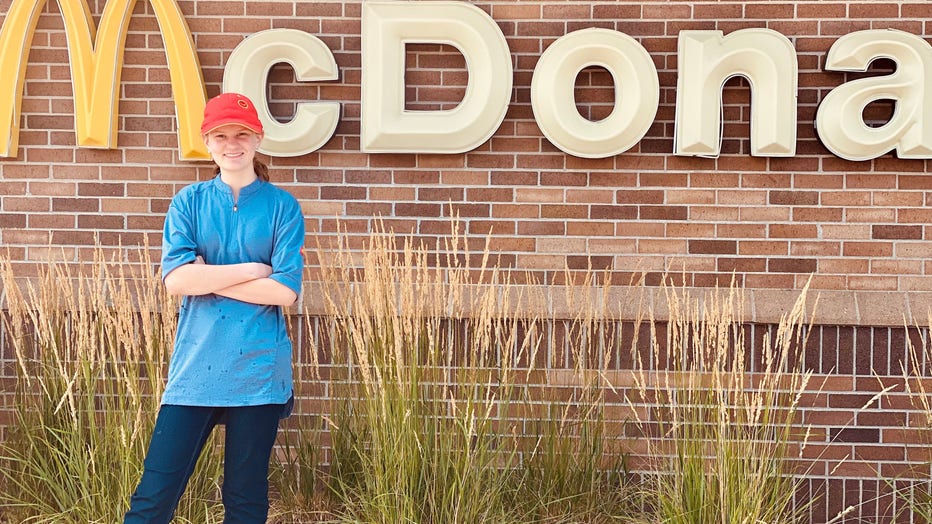 Sydney Raley, 15, is being credited as a hero after jumping through a Minnesota McDonald's drive-through window to save a choking customer. (Credit: Tom Raley)

Raley said she realized the woman in the driver’s seat was choking and told her manager to call 911.

But the teen didn’t wait for first responders to arrive.

"It was at this time I jumped through the window," she continued. "I told her daughter call 911. I got her [the customer] out of the car. I started doing the Heimlich maneuver."

Raley said she realized that she wasn’t strong enough to perform the first-aid procedure after multiple attempts. She flagged down another customer in the drive-through line who was skilled in first-aid and helped dislodge a chicken nugget from the woman’s throat.

Raley said she learned the maneuver after taking a babysitting class at the local Red Cross.

McDonald's employee turns 100 years old with no plans on retiring

Ruth Shuster celebrated her 100th birthday Wednesday, and she said retiring from her job at McDonald’s isn’t even on her radar.

"And I knew that if you’re in an emergency situation like this, you have to act fast because every single second counts," she added.

Police said when officers arrived, the woman’s airways were clear and the bystander had left the scene.

Two officers each gave Raley a $50 bill as part of the department’s "Cops & Cash for the Holidays" program which is sponsored by the Eden Prairie Crime Prevention Fund. People can anonymously donate to the program in which officers will take the money and distribute $50 cash to local residents to brighten people’s holidays. This is the second year of the program.

RELATED: ‘I feel I’m the lucky one’: McDonald’s employee turns 100 years old with no plans to retire

"We’re very proud of Sydney," Sgt. Scott Mittelstadt said. "She’s a great example of how all of us – no matter our age or position – can make a difference in our communities."

Chinese McDonald's Installs Bikes for Customers to Pedal While Dining

A Shanghai McDonald’s restaurant installed bicycle seats for customers to pedal away while dining in at the fast-food outlet. (Credit: 泡椒辣叔/Uncle Pickle via Storyful)

"We are incredibly proud of Sydney and her quick, heroic actions over the weekend to help one of our valued customers," Paul Ostergaard, McDonald’s Owner Operator told FOX Television Stations. "Sydney truly personifies what it is to be a hero and we are incredibly lucky to have her as a highly-valued crew member at our Eden Prairie restaurant location."

Raley said she’s grateful for the support she has received since the story became public.

"An emergency can happen any way, any place," she said. "But every single one of us has the capability of being able to make a difference, to make a change to protect people and keep people safe no matter our race, no matter our ethnicity, it doesn’t matter, we’re all human and I feel like we should all look out for one another."