Mayflower, Arkansas (CNN) -- Forecasters on Monday warned millions of Americans to be prepared for another round of severe storms, including widespread tornadoes, a day after storms killed 16 people in three states.

The storms Sunday in Oklahoma, Iowa and Arkansas were the opening act in a powerful system that threatened to bring intense tornadoes and large hail Monday to parts of Alabama, Louisiana, Mississippi and Tennessee. The Storm Prediction Center warned Monday afternoon of a "particularly dangerous situation" for those areas, similar to urgent warnings issued ahead of the Sunday's storms.

"It's going to be wave after wave of these storms, from what the forecasters tell us," Mississippi Emergency Management spokesman Greg Flynn said.

Twisters were reported Monday afternoon near Tupelo and Yazoo City, Mississippi, north of Jackson, but there was no immediate report of damage or injuries. Monday's storms hit four years after an April 2010 tornado that killed four people in Yazoo City and 10 across the state, said Joey Ward, the city's emergency management director.

"It's still hopefully very fresh on people's minds, and that they take all of the warnings that we've been putting out all day very seriously," Ward said.

Heavy weather was forecast to stretch into the Midwest and Ohio River Valley, with much of Illinois, Indiana and Kentucky at a lesser risk of severe weather, forecasters said.

About 3 million people in the South and Midwest are under a moderate threat for severe weather Monday, CNN meteorologist Indra Petersons said. About 24 million are at slight risk of severe storms, she said.

In the hardest-hit area, Faulkner County, Arkansas, Sunday's suspected tornado shattered homes, tossed tractor-trailers and killed 10 people, two of them children, authorities said. The most affected areas were in the towns of Vilonia and Mayflower. 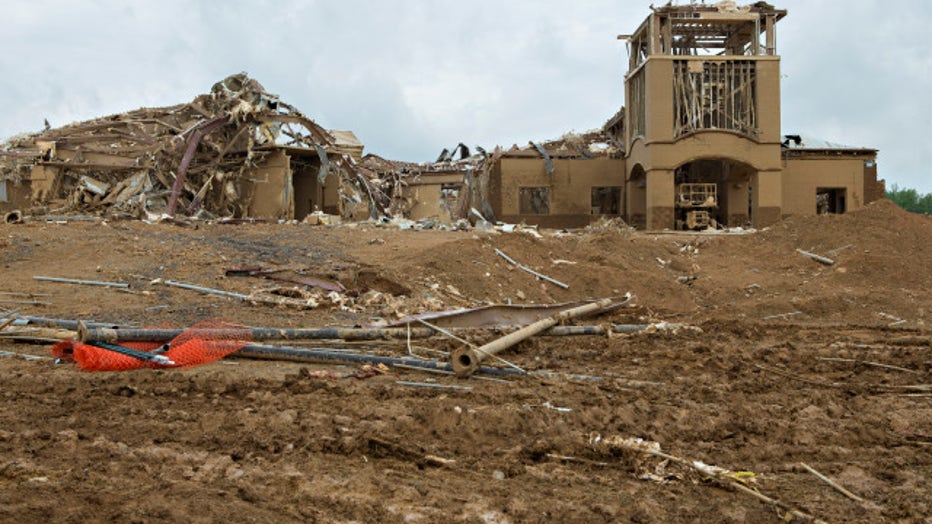 New Vilonia Intermediate School that was set to open in August is left to ruins after a strong tornado went through the area on April 27 for the second time in three years on April 28, 2014 in Vilonia, Arkansas. After deadly tornadoes ripped through

"There were cars flipped everywhere, there were people screaming," James Bryant, a Mississippi State University meteorology student, told CNN's "New Day" on Monday. "It was a tough scene."

Another meteorology student, Cotton Rohrscheib, described how the storm picked up his truck and skidded it about 120 feet down a highway.

"We were all hunkered down inside of the truck, and praying," he said.

None of the truck's occupants was seriously hurt, he said.

"We were very fortunate to walk out of there."

That work was to continue throughout the day behind a police cordon that's keeping residents, would-be volunteers and gawkers at bay, he said.

Arkansas officials reported 14 people had died there in Sunday's storms. They had earlier reported 16 deaths but said that figure was in error, Arkansas Department of Emergency Management spokeswoman Kathy Wright told CNN.

Three people had died in Pulaski County, not the five reported earlier, she said. Officials say one person also died in White County, Arkansas, and one each in Oklahoma and Iowa.

Hogue said it's "entirely possible" the death toll would rise as emergency crews search the wreckage of destroyed homes, including some only recently rebuilt after being flattened three years ago by another tornado.

Arkansas Gov. Mike Beebe said the storm was one of the worst to hit the state in recent memory.

Vilonia Mayor James Firestone described a scene of chaos in his town hours after the storm.

"There's a few buildings partially standing, but the amount of damage is tremendous," he said Sunday. "There's gas lines spewing. Of course, power lines down. Houses are just a pile of brick."

Authorities shut down a section of Interstate 40 after a tornado "as much as a half-mile wide" roared through the area, according to the National Weather Service.

The heavily used road was littered with crushed and overturned trucks and cars.

CNN meteorologist Chad Myers, who was in Mayflower, estimated the winds from the storm were at 130 to 150 mph.

Emergency workers tended to the scene throughout the night. Shelters were set up at a high school and local church.

The city's official website said schools would be closed Monday.

Nearly 18,000 homes and businesses were without power Monday in Arkansas, more than 10,000 of them in Faulkner County, Entergy Arkansas reported.

Emergency crews weren't sure of how many people were missing Monday morning, said David Maxwell, director of the Arkansas Department of Emergency Management.

"I know crews were extremely busy going door to door last night, but it's just so hard to do with the power out and after dark," he said.

The Arkansas governor issued a disaster declaration for Faulkner, Pulaski and White counties, and President Barack Obama offered his condolences and promised storm aid to victims while on a four-nation tour of Asia.

Damage in other states

Before the bad weather slammed into Arkansas, witnesses spotted a twister in the northeast Oklahoma town of Quapaw, where one person died, the Ottawa County Sheriff's Office said.

John Brown, 68, of nearby Baxter Springs, Kansas, was traveling through Quapaw with his wife when the storm hit. He pulled into a parking lot, and a concrete wall fell on their car, killing him, according to the sheriff's office. His wife was treated at a nearby hospital and released.

The same line of storms also hit Baxter Springs just a few miles to the north. Sixty to 70 homes and at least 20 businesses were reported destroyed, said Cherokee County emergency manager Jason Allison. A tornado estimated to be three blocks wide rumbled through the town of 4,200, he said.

The one bright spot amid Sunday's devastation were the forecasts that predicted the severe weather days ago, storm chaser Brett Adair said.

"This definitely was not something to take lightly," he said.