Microsoft President Brad Smith made the announcement on Monday during a meeting with regional business and political leaders at the Epic Railyard building near Downtown El Paso.

“One of the goals that we brought was to identify new ways that technology might help create 21st-century jobs because even a place with a rich heritage can advance into the future only if it does so with the next generation jobs and the next generation of people,” Smith said. 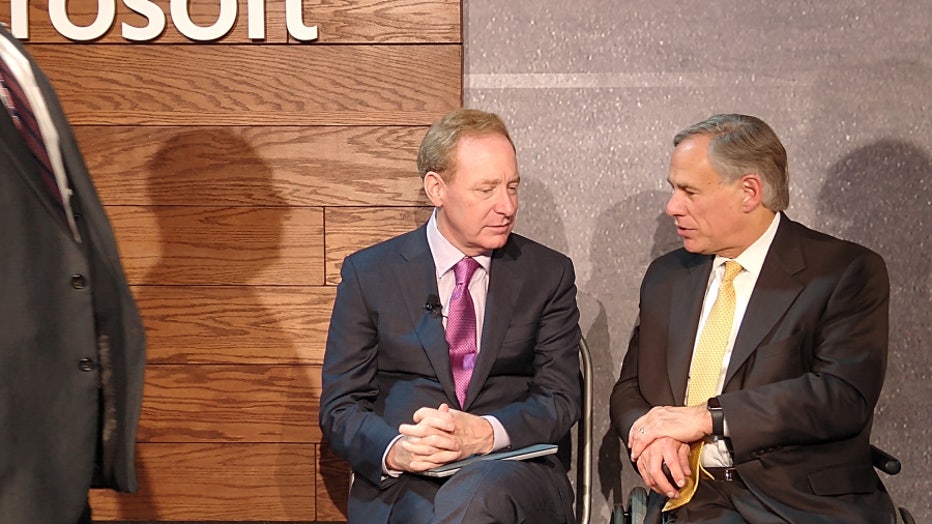 “This isn’t just about creating new jobs, it’s also about ensuring that the people who live here have the opportunity to pursue them. Part of that means expanding opportunities or people who grow up here. That, of course, means bringing new skills to schools,” Smith said.

Microsoft will also work with the University of Texas at El Paso and other higher-learning institutions in the region to create more technology-oriented career pathways.

As for the international business accelerator, Microsoft this summer started working with entrepreneurs in El Paso and Juarez, Mexico, to help them generate more business opportunities through the use of technology. The companies specializing in manufacturing, logistics and transportation have so far received 52 new purchase orders worth $1.5 million, been pledged $250,000 in new investments and created 33 new jobs.

Abbott said business executives all across America already see Texas as a good place to do business, but often point out that it doesn’t have enough skilled workers.

“We have a record low unemployment rate, but we need to recognize and grapple with our need to transform our workforce. (It) needs to be upgraded to perform the tasks that these companies, whether they come from Dallas or Tokyo, have access to the workforce they need for the next generation of business,” he said.

However, Abbott highlighted El Paso as an example for other Texas cities to follow as far as its partnership with Microsoft, the school districts and the business community. “As a state, we need exactly what is happening here in El Paso today,” he said.

Smith from Microsoft said he notices how El Paso is leveraging its business and cultural ties to Mexico.

“It’s not just two cities that share a common border, but that come from two countries, that speak two languages, that represent two cultures and that have a unique opportunity to pursue (business interests) together. That’s what struck us in coming to El Paso and Juarez,” Smith said.

Corral and his Secretary of Innovation and Economic Development Alejandra de la Vega stressed the advantages of cultural and business ties between El Paso and Juarez.

“This is a binational community that strives to be seen as a single community … that emphasizes its commonalities and potential over its differences,” Corral said. He added that the companies that operate on both sides of the U.S.-Mexico border are trying to “upgrade their chip,” going from factories that manufacture things to industrial design, engineering, science and business development operations.