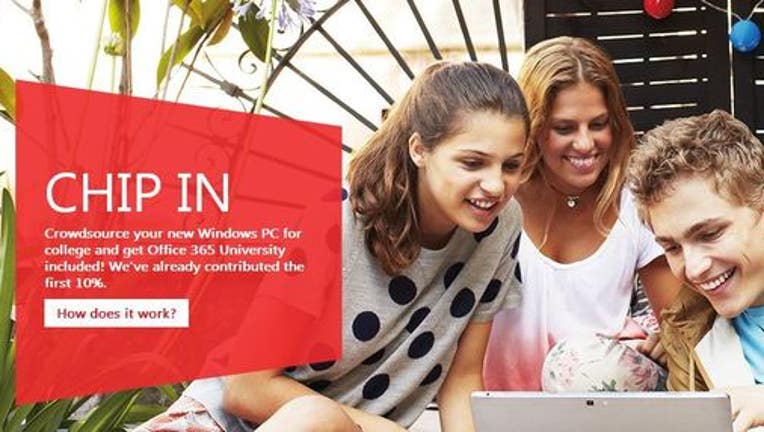 With graduation season in full swing, Microsoft is launching a new website that lets families and friends come together to buy their graduates a Windows laptop.


Students with .edu email addresses can go to the new website to pick one of 15 laptops they want and set up a donation page they can use to ask their friends and family members to "Chip In," which also happens to be the name of the website.

Microsoft's Kristina Libby, the head of consumer communications for Windows, said the idea behind Chip In was to make it easier for students to get laptops for college by helping them crowd-source the necessary money from their loved ones.

“It’s a really easy way for friends and family to help give students a gift that they actually want and actually need,” Libby said.

Chip In also makes it easier for friends and family to see how their gift money is being used. Libby, for example, sent her niece money for a computer but the niece instead spent it on getting a tattoo.

"By the time she got it, she'd already purchased her computer, and so she used the money to buy a tattoo instead," Libby said, laughing. "We created this site in order to make it so that what you're putting money toward is really what it's going toward."

Besides making it easy for users to raise the necessary money, Chip In will also give users a 10% discount on the laptop and it will come with a four-year subscription to the University version of Microsoft Office 365, which typically costs $79.99.

Once users receive the money needed for the laptop they want, the website will give them a promotional code that they can use at MicrosoftStore.com to order their computer.

Students can use Chip In to get a new laptop from now until Sept. 1.