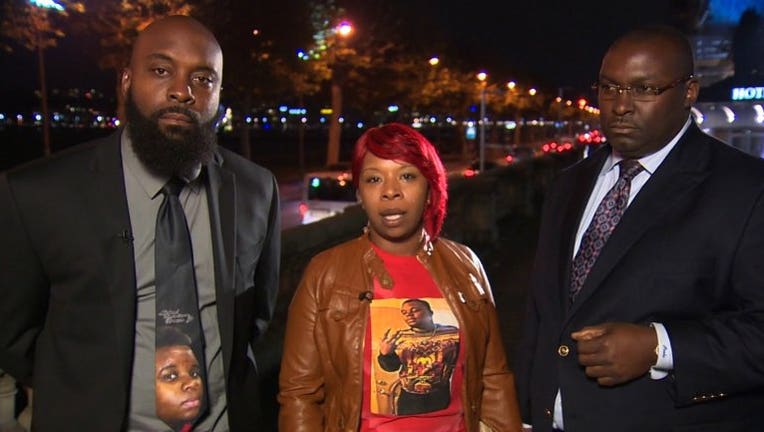 The parents of Michael Brown, Lesley McSpadden and Michael Brown Sr., testified before a United Nations committee Tuesday, Nov. 11, 2014, because they want the world to know "what's going on in Ferguson."

ST. LOUIS -- The parents of Michael Brown, a Missouri teen killed by police, testified before a U.N. committee Tuesday because they want the world to know "what's going on in Ferguson."

Lesley McSpadden and Michael Brown Sr. spoke to the United Nations Committee Against Torture -- which also works against cruel or degrading treatment or punishment by government authorities.

"We need the world to know what's going on in Ferguson and we need justice," McSpadden told CNN in Geneva, Switzerland.

"We need answers and we need action. And we have to bring it to the U.N. so they can expose it to the rest of the world, what's going on in small town Ferguson."

Accounts differ as to what led to the August shooting of Brown, an unarmed black 18-year-old, by a white police officer.

While their testimony to the committee took place behind closed doors, the delegation that organized their trip said the couple would read from a statement submitted by the Brown family and organizations called HamdsUpUnited, the Organization for Black Struggle, and Missourians Organizing for Reform and Empowerment.

The document says Brown's killing and force used by police officers during protests that followed the killing "represent violations of the Convention against Torture and Other Cruel, Inhuman or Degrading Treatment or Punishment."

It requests that the U.N. panel recommend the immediate arrest of Officer Darren Wilson, who killed Brown, as well as an end to "racial profiling and racially-biased police harassment across the jurisdictions surrounding Ferguson."

Ferguson authorities have repeatedly denied similar accusations in the past.

The statement also calls for recommendations that would apply to the entire United States, including that the attorney general and Department of Justice "must conduct a nationwide investigation of systematic police brutality and harassment in black and brown communities, and youth in particular. Methodology and findings of this investigation must be made publicly available."

In a statement, the Browns' attorney's office said the couple planned to "testify on behalf of many supporters who join in the appeal for global intervention in the way policing currently functions in America."

Their trip to Geneva marked the first time out of the United States for the couple, CNN affiliate KSDK reported.

"We've been received very well," McSpadden told CNN. "They've given us a lot of love and support since we've been here. Everything seems to be positive. It's a great experience."

Michael Brown Sr. said he and his wife were offering "an outlook on what's going on in the United States and all over the world with the police, police brutality, no justice."

Speaking of what life has been like since the killing, he said, "It's a situation where I'm surprised we haven't even lost our mind yet over this. But we're being strong. Hopefully, justice will prevail."

The trip came as the parents, and many people throughout the United States, brace for the results of grand jury deliberations -- which will determine whether Wilson, 28, is indicted.

The trip was organized by the U.S. Human Rights Network, which is based in New York and Atlanta, KSDK reported.

"Traditionally, if you look at the history of the Convention Against Torture, this is the correct location for claims of police violence," St. Louis University Assistant Professor Justin Hansford, one of the co-authors of the brief, told KSDK.

The Committee Against Torture "is the body of 10 independent experts that monitors implementation of the Convention against Torture and Other Cruel, Inhuman or Degrading Treatment or Punishment by its State parties," the U.N. Office of the High Commissioner for Human Rights says on its website.