MEXICO CITY (AP) — The wiggling fingers of a young girl trapped in the rubble of her collapsed school in Mexico City raised hopes among hundreds of rescuers working furiously Wednesday to try to free her — a drama that played out at dozens of buildings toppled by the powerful earthquake that killed at least 223 people.

But it was the ongoing rescue at the Enrique Rebsamen school, where 25 people including 21 children perished, that was seen as emblematic of Mexicans' rush to save survivors before time runs out.

Helmeted workers spotted the girl buried in the debris early Wednesday and shouted to her to move her hand if she could hear. She did, and a rescue dog was sent inside to confirm she was alive.

Hours later the crews were still laboring to free her, as images of the rescue effort were broadcast on TV screens nationwide. Workers in neon vests and helmets used ropes, pry-bars and other tools, frequently calling on the anxious parents and others gathered around to be silent while they listened for any other voices from beneath the school.

At one point, the workers lowered a sensitive microphone inside the rubble to scan for any noise or movement. A rescuer said they thought they had located someone, but it wasn't clear who.

"It would appear they are continuing to find children," said Carlos Licona, a burly sledge-hammer wielding volunteer who came to help in any way he could. Asked if that made him optimistic, he said, "I hope so."

It was part of similar efforts at the scenes of dozens of collapsed buildings, where firefighters, police, soldiers and civilians wore themselves out hammering, shoveling, pushing and pulling debris aside to try to reach the living and the dead.

By mid-afternoon, 52 people had been pulled out alive since Tuesday's magnitude 7.1 quake, Mexico City's Social Development Department said, adding in a tweet: "We won't stop." Among them were 11 people rescued at the Enrique Rebsamen school, where three people remained missing, two children and an adult. Earlier, journalists saw rescuers pull two small bodies from the rubble, covered in sheets.

More than 24 hours after the collapse, the debris being removed from the school began to change as crews worked their way inside: From huge chunks of brick and concrete, to pieces of wood that looked like remnants of desks and paneling, to a final load that contained a half-dozen sparkly hula-hoops. 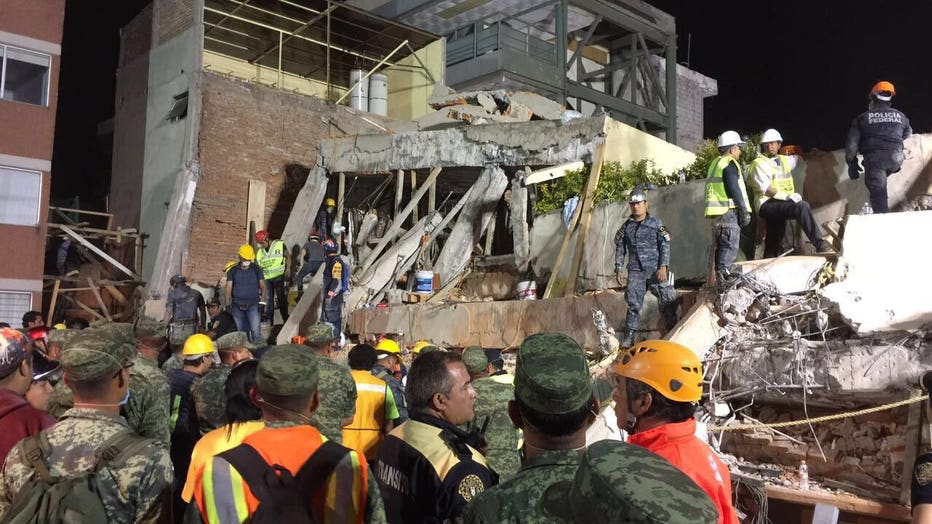 Volunteer rescue worker Dr. Pedro Serrano managed to crawl into the crevices of the tottering pile of rubble and make it to a classroom, where he found no survivors.

"We saw some chairs and wooden tables. The next thing we saw was a leg, and then we started to move rubble and we found a girl and two adults — a woman and a man," he said. All were dead.

"We can hear small noises, but we don't know if they're coming from ... the walls above, or someone below calling for help," Serrano said.

Twelve-year-old Carlos Herrera Tome escaped the school. But on his mind were a favorite teacher, a janitor always friendly with the kids, the two women who patrolled the halls and greeted children at the school's gates, a best friend's little sister.

The Enrique Rebsamen school, the Mexico City private school he attended for eight years, had fallen around him less than 24 hours earlier amid a magnitude 7.1 earthquake. The only thing he wanted to do was go back, to help somehow.

His mother, Norma Tome, said he wouldn't be allowed into the site, it was too dangerous. But they went to the school anyway. It took them an hour to go three blocks because they kept bumping into people they knew. With each encounter came a halt to exchange information about names, hospitals, funeral plans, even the school's layout.

When a couple asked Luis Carlos to describe for the umpteenth time what he saw and how he escaped, he hugged his arms tightly across his chest and turned away when he began tearing up.

Luis Carlos and his mother scanned handwritten lists of the missing and those taken to hospitals, wincing at names they recognized.

Hugs were offered and accepted, but Luis Carlos felt helpless outside the security barriers playing the events of the previous day back.

He said he was in English class Tuesday when everything started moving. He headed for the door leaving his backpack, books, pencils and everything behind.

First he turned to the school's main staircase, a concrete structure toward the front of the building.

"I saw that the ceiling started to break apart so I turned around," he said.

"I grabbed my friends and we took off running," he added, showing how they linked arms.

They ran together for another staircase. The building continued shaking violently and one friend fell on the stairs.

"It moved a lot. I braced myself and cleared like five stairs in one jump," he said.

Dust falling from walls and the ceiling made it hard to see but he could make out students with cut and bleeding arms. Everyone was crying and screaming, he said.

The students who exited with Luis Carlos quickly realized they were trapped even once outside. Residents of a neighboring apartment building broke through a fence atop a tall wall separating the properties and lowered a ladder so the students could climb out.

On his way out, Luis Carlos saw his favorite janitor with rubble on his back apparently dead. In the street, ambulances were arriving and teachers stained with blood were crying.

"It was chaos," he said. But Luis Carlos had only one thought looking back at the collapsed school: Where was his little brother?

The brother — 7-year-old Jose Raul Herrera Tome — had been in a classroom in a building right next to his brother's.

The younger boy told his mom later that a classmate was the first to scream: "It's shaking!"

He said the students heard no alarm even though it occurred only two hours after their school, and every other one in Mexico, had done an evacuation drill to mark the 32nd anniversary of the 1985 earthquake that killed thousands in Mexico City.

"That's what makes me mad," the older brother said of not hearing an alarm. "How many seconds were lost there?"

Jose Raul also ran first for the big staircase at the front of the school, but stopped when he saw it beginning to crumble. He ran back to his classroom and waited there with his classmates until the shaking stopped.

The boys' mother said a multipurpose room near the school's front staircase was where most of the dead had been recovered.

"'Mom, I saw a girl go down because she was crushed,'" Tome recalled her younger son telling her after he escaped the building. "He cried a lot for that and said, 'I couldn't save her.'"

When Jose Raul made it to the street he looked back at the school and said, "My brother, my brother," Tome said.

The brothers hugged when they found each other across the street.

"We cried. He was my biggest worry," Luis Carlos said.

On Wednesday, Luis Carlos helped pass water and bandages for an hour, and answered frantic parents asking if he had seen their kids. He never let go of his brother.

The family planned to go later in the day to a wake for Claudia Ramirez, the second-grade teacher who Jose Raul adored.

Ramirez was "one of those rare exceptional teachers — unique ones who leave their imprint on the lives of the children and the parents," Tome said.

Later, Luis Carlos returned to the terrifying moments during the earthquake, which occurred just a few minutes before he was supposed to move to his biology class. He had remembered that they hadn't finished their lab on Friday and were scheduled to be back in the lab Tuesday in the part of the school that collapsed.

"I don't know if I would be here," he said, suddenly feeling the weight of the quake's timing.

A helicopter overflight of some of the worst-hit buildings revealed the extent of the damage wrought by the quake: Three mid-rise apartment buildings on the same street pancaked and toppled in one Mexico City neighborhood; a block in the town of Jojutla, in Morelos state, where nearly every home was flattened or severely damaged and a ruined church where 12 people died inside.

The death toll included 93 people killed in Mexico City; 69 in Morelos state just south of the capital; 43 in Puebla state to the southeast, where the quake was centered; 12 in Mexico State, which borders Mexico City on three sides; four in Guerrero state; and one in Oaxaca, according to the official Twitter feed of civil defense agency head Luis Felipe Puente.

President Enrique Pena Nieto declared three days of national mourning even as authorities made rescuing the trapped and treating the wounded their priority. "Every minute counts to save lives," Pena Nieto tweeted.

In the town of Jojutla in Morelos state, dozens of buildings collapsed, including the town hall. One building had been rocked off its foundations and part way into a river.

"I told them that it was not a game, that we should be prepared," Anzures said of the drill. When the quake hit, she said, children and teachers rapidly filed out and nobody was hurt.

Town residents who had spent Tuesday night on the streets next to homes that were severely damaged or flattened outright, wrapped in blankets or on mattresses, walked past shattered buildings and picked through what was left when daylight came

At a wake for Daniel Novoa, a toddler killed when his home collapsed, family members bent over a white child-size coffin surrounded by a crucifix and images of Mexico's patron, the Virgin of Guadalupe. Alongside was a larger open coffin for the child's aunt, Marta Cruz.

In Atzala in Puebla state, villagers mourned 11 family members who died inside a church when it crumbled during a baptism for a 2-year-old girl. People at the wake said the only ones to survive were the baby's father, the priest and the priest's assistant.

Power was being restored in some Mexico City neighborhoods that had been left in darkness overnight, and officials reported that the sprawling Metro system was running at near-normal capacity. Mayor Miguel Angel Mancera said there were 38 collapsed buildings in the capital alone, down from the 44 he had announced previously.

People rallied to help their neighbors in a huge volunteer effort that included people from all walks of life in Mexico City, where social classes seldom mix. Doctors, dentists and lawyers stood alongside construction workers and street sweepers, handing buckets of debris or chunks of concrete hand-to-hand down the line.

"Though it is too early for authorities to have an estimate of the damage as rescue work continues, it is certain that economic activity ... will continue to be disrupted for some time," Coutino wrote.