NEW YORK - The New York Mets and Miami Marlins jointly walked off the field after a moment of silence, draping a Black Lives Matter T-shirt across home plate as they chose not to play Thursday night.

After other games around baseball were postponed to protest social injustice, the Mets were late to take the field Thursday and never submitted a lineup to the public or the umpires. Neither starting pitcher threw any warmup pitches. The teams stood around their dugouts in full uniforms shortly before the 7:10 p.m. scheduled first pitch, and the national anthem was played and all players and coaches stood.

Mets outfielder Dominic Smith — a Black man who wept Wednesday night while discussing the shooting by police of a Black man in Wisconsin over the weekend — led New York onto the field. Players took their positions, then reserves and coaches filed out of both dugouts and stood silently for 42 seconds.

Members on each team doffed caps towards the other side before returning to their clubhouses, leaving only the black T-shirt at home.

“The words on the shirt speak for themselves, just having it in the center of everything, just knowing that both teams are unified, and that we agreed to do this,” said Marlins outfielder Lewis Brinson, who was Miami’s leadoff hitter and stood near the batter’s box for the silent display. “And it was the right thing to do.”

“It really touched all of us in the clubhouse, just to see how powerful his statements were, how emotional he was,” Conforto said “He’s our brother, so we stand behind him and we stand behind (Black Mets outfielder) Billy (Hamilton). All the players who stand up against the racial injustice, we stand behind them. And that’s what you saw tonight.” 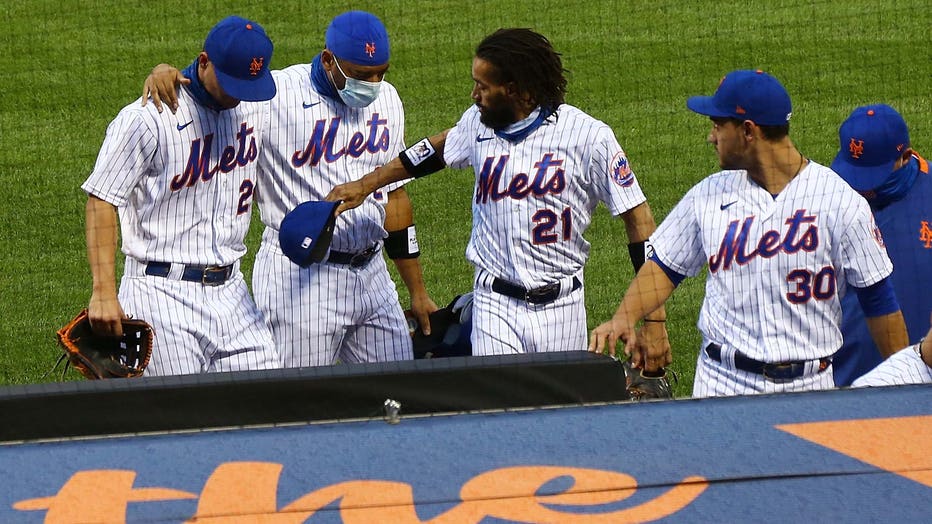 Dominic Smith #2, J.D. Davis #28, Billy Hamilton #21 and Michael Conforto #30 of the New York Mets walk off the filed prior to the game against the Miami Marlins at Citi Field on Aug. 27, 2020 in New York City. (Photo by Mike Stobe/Getty Images)

Conforto said Rojas came up with the idea of the teams walking off the field, and that it came together at the last minute. Conforto and Smith were seen talking with Brinson and Rojas as the teams warmed up.

Smith, who implored people to give their time to inner-city communities on Wednesday night, said he’d heard from players in the NBA and NFL as well as baseball players such as Jack Flaherty who were interested in donating money and time to his foundation.

The 42-second moment of silence came a day before Major League Baseball plans to hold its annual Jackie Robinson Day, which was pushed back from the usual April 15 due to the pandemic.

“It needs to be an ongoing thing,” Brinson said. “It can’t just be one day out of the baseball year that we bring light to everything.”

The teams walked off about two hours after a video appeared on the league’s official website in which Mets general manager Brodie Van Wagenen said that his players did not want to play and they were waiting to hear from the Marlins about coordinating a postponement.

“That’s Rob’s instinct,” Van Wagenen said in a conversation he didn’t appear to know was being streamed on MLB.com. “At a leadership level, he doesn’t get it. He just doesn’t get it.”

Van Wagenen said in the video — after specifying the conversation “can’t leave this room” — that Manfred wanted the Mets and Marlins to walk off the field together shortly before the scheduled 7:10 p.m. first pitch, then come back and play at 8:10 p.m.

Van Wagenen apologized for his comments later Thursday, saying in a statement the idea to walk out and return was actually hatched by Mets Chief Operating Officer Jeff Wilpon.

“I have put myself and this organization into this conversation in a way that takes away from the real point,” Van Wagenen said on a conference call Thursday night. “I’m disappointed in myself.”

Manfred said in a statement that he has not tried to override players’ wishes to protest by not playing.

“Over the past two days, players on a number of Clubs have decided not to play games,” he said. “I have said both publicly and privately that I respect those decisions and support the need to address social injustice. I have not attempted in any way to prevent players from expressing themselves by not playing, nor have I suggested any alternative form of protest to any Club personnel or any player. Any suggestion to the contrary is wrong.”

Wilpon also said in a statement that the walkoff-and-return plan was his.

“To clear up any misunderstandings, it was my suggestion to potentially look into playing the game later because of scheduling issues," Wilpon said. "Brody’s misunderstanding of a private conversation was and is inexcusable.

"We fully respect our players and the Marlins players decision to not play tonight and appreciate the sincerity of all those who wish to draw attention to social injustices and racial inequalities that must be addressed. The entire Mets organization remains committed to creating meaningful change in our society.”

Van Wagenen said he didn’t know how or when the Mets and Marlins, who were scheduled to complete their season series Thursday, would make up the game. The only mutual day off remaining for both teams is Monday.