SEATTLE - When opportunity came knocking, Elijah Williams was willing to take the chance.

The 16-year-old was caught in a vicious cycle, following the school-to-prison pipeline in Seattle.

"On the path I was headed I really wasn’t going to be nothing," Williams said. "I was more of a follower. I wanted to be like everyone else, kids running around trying to gang bang, trying to be like all the older people, looking up to them. I guess I really took a different path even though we were going to end up the same anyways. They were probably going to be in jail, I was going to be living off my mom, and probably get to the point where maybe even be homeless."

However, something changed his trajectory - a brotherhood guiding him on the right path to a brighter future.

Two years ago, Elijah’s mother was at her wits end with the trouble he was causing, so she signed him up for a mentoring program called M.U.S.T., or Mentoring Urban Students and Teens. 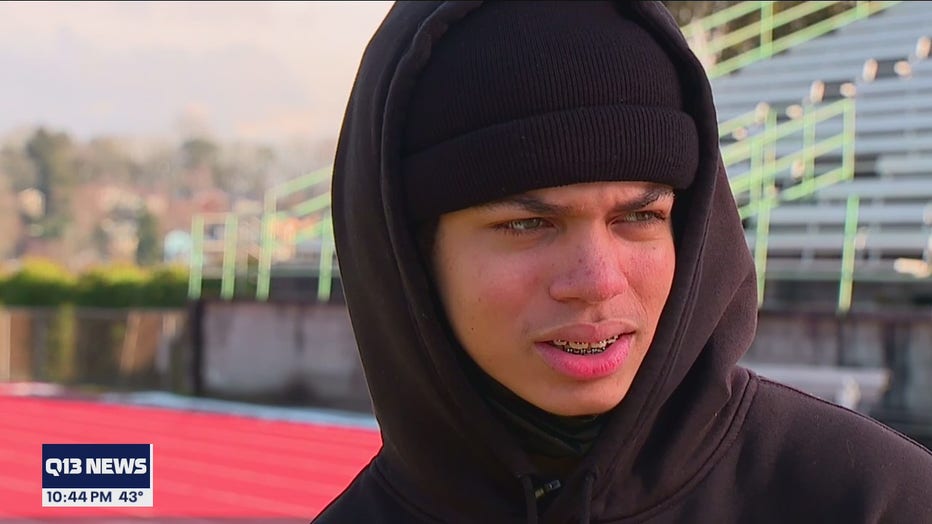 Standing beside a mural spotlighting the most prominent black leaders in our nation, Washington didn't always see himself as one.

"For me as a black male in Houston it was different, a lot of attitude problems, a lot of getting in trouble for no reason just because of who I am, and I see the same thing in the boys I’m with now. They’re just acting out because they don’t have a deeper understanding of what’s going on," said Washington.  "Our near pure mentorship is really special because our young men that are in high school are connected with a black young man that are two or three years older, that’s the cycle of hope."

That’s where mentor Mark Phillips comes in. Growing up in Seattle’s Beacon Hill neighborhood, Phillips recalls the year in his life that changed his path.

"My 5th grade year I did terrible. I had 120 missed assignments, my parents found out I was not doing school. My parents actually decided to hold me back, and so they held me back and I met this new teacher. She became my mentor and then I sailed through school after that," Phillips said.

Hard work paid off. Phillips got a full-ride academic scholarship to Seattle University and the opportunity to share his knowledge and experience with someone like Elijah.

"The first time I met him, he literally wouldn’t say anything. He was super shy," said Phillips. "My job as a mentor is really not to just give him answers; giving him answers is a temporary solution. But if I give him the principles he can create his own solutions and that will last way longer."

Every week Mark and Elijah meet up. They work out, discover a new activity together and then they grab a bite to eat.

This time, the Jerk Shack in Belltown welcomed them in, and at the table the hard work is never too far out of view.

"It looks like you got a B in geometry, an A in French, A-minus in lit comp, B-minus in comp science," said Phillips.

"I didn’t want to go to college before. I really didn’t even want to do high school, but now I look forward to all that," said Williams.

"He’s realizing he does have the capacity to be whomever he wants to be, but it takes hard work and you’re seeing a young man who is putting in work he’s never put in, and he’s getting results he’s never seen and I think that’s the power in consistency," said Washington.

Elijah can finally dream again, knowing he can turn that dream into reality. It’s all because of an opportunity to break the cycle and encourage him to believe in himself.

"I might try and become a mentor myself," said Williams.

For more information about M.U.S.T. you can click here.

lf you would like to make a donation to their organization, you can find that link here.