NEW YORK – So many incredible things happen in New York City that sometimes it's hard to tell which ones are real. Now one New Yorker is pushing the skepticism of locals and tourists with yet another monument honoring an unbelievable event. 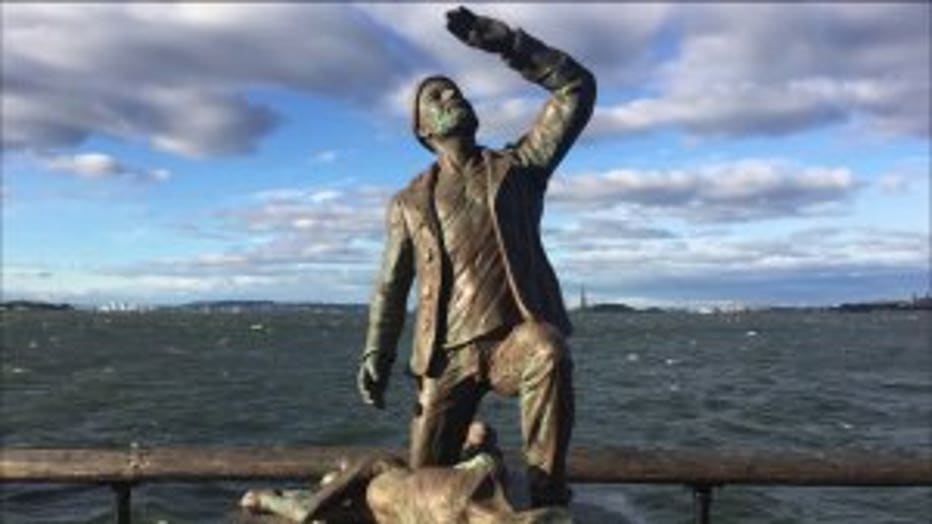 A memorial statue in Manhattan, seen on Nov. 26, 2018, "honors" the victims of tragedy that never actually happened. (PIX11)

"I'd say eight out of 10 people believe it," said Joe Reginella.

Reginella sculpted the statue honoring the vanishing of the crew of the Tugboat Maria 120. He brings it from his Staten Island studio to Battery Park on the weekends, according to WPIX, weather permitting.

The statue remembers the six crew members who mysteriously disappeared back in 1977 after a UFO crashed in the harbor. But if the story doesn't ring a bell, it could be because it happened on the same night as the infamous New York City blackout - or because it's not really true.

Reginella has been creating similar monuments that honor tall tales for the last three years. They started on a ferry ride to  New York with his 9-year-old-nephew. The sculptor says his nephew wanted to know if the boat had ever been attacked by sharks. He said no, but came up with an even better story about a boat that had been swallowed by a giant octopus.

From there, the science fiction lore grew larger than that fictional octopus. It started with a monument, but with the help of his team, it quickly grew into an alternate reality with websites, fake news articles, and documentaries to back it up.

"That just added to the layers of it," Reginella said. "So when you see it in the park, it's not just a monument, people go on the phone and google the story and they're like 'What the hell?' and it's backed up with some fake facts."

It takes about nine months for the team to create each monument, story, and documentation. Then Reginella sets it up for locals and tourists to take in. He funds the projects with t-shirts and souvenirs sold through the websites. So far he says he's managed to pay for the materials, but any idea that he or his friends are getting rich is just like his stories: complete fiction.

He's already got a few ideas for his next project, however, it won't involve those alligators that keep popping up in the sewers.