"Thanks to our military heroes. If you look around, you'll see lots of them represented. In fact there's so many of them, they had to have a separate service for Dom on the military base, because we were not able to fit them all in. That shows the service that he provided to the American citizens before providing to the citizens of Pierce County." Sheriff Ed Troyer with Pierce County Sheriff's Department shares stories and memories of Deputy Dom Calata, who was killed last week while serving a felony warrant in Spanaway.

The "Celebration of Life for Deputy Dom Calata" is being televised on FOX 13 and streamed live (above) on FOX13Seattle.com from the Church for All Nations at 111 112th Street East.

The Pierce County Sheriff's Office said the service is open to the public but said space will be very limited.

Family, friends and first responders will be the priority for seating, and the department encourages the public to attend at the satellite location at Champions Centre at 1819 East 72nd Street in Tacoma.

The Pierce County Sheriff's Department said the procession route will be from the Fair Gold Lot to the Church for All Nations. 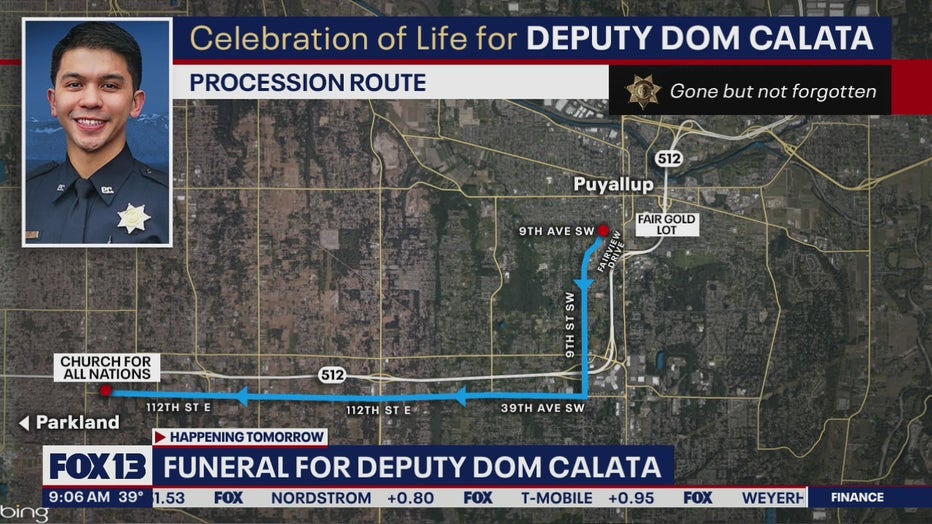 Several agencies throughout Washington have started gathering Friday morning for the procession.

Calata died after he was shot last week while serving a felony warrant in Spanaway.

Over the weekend, Calata’s remains were carried by his team members from St. Joseph Hospital to the Pierce County Medical Examiner’s Office.

A legacy fund has been set up for Calata. It was created in partnership with Tacoma-Pierce County Crime Stoppers and 100% of the funds will go to Calata’s wife and their young son.

Bloodworks Northwest has set up a memorial blood drive in honor of Calata. Click here for more information.

The Pierce County Sheriff’s Department announced on Thursday that a legacy fund has been set up for SWAT deputy Dom Calata.

>>RELATED: 'Dom was all about service'; Community reactions pour in after Pierce County deputy dies, other in recovery