Dyson, 25, died Saturday when he crashed his patrol car while racing to an urgent call to help fellow deputies with a domestic violence case in Parkland.

TACOMA, Wash. -- The Pierce County Sheriff's Department on Thursday announced the procession route and details about the memorial for Deputy Cooper Dyson.

Dyson died in the line of duty when his patrol car crashed while he was on his way to back up other officers on an urgent domestic violence call.

The sheriff's department is encouraging everyone to line a processional route on Monday, Dec. 30.

The procession will begin at 11 a.m. at Joint Base Lewis-McChord's main gate, heading north on S. Tacoma Way Ext., then onto S. Tacoma Way. It will then head east on 26th St. and end at the Tacoma Dome on 'D' St.

As for the memorial service at the Tacoma Dome, it begins at 1 p.m. Deputy Dyson's family invited the public to attend the service.

Doors will open at 11:00 a.m. There will be no public parking available at the Tacoma Dome, the department said. 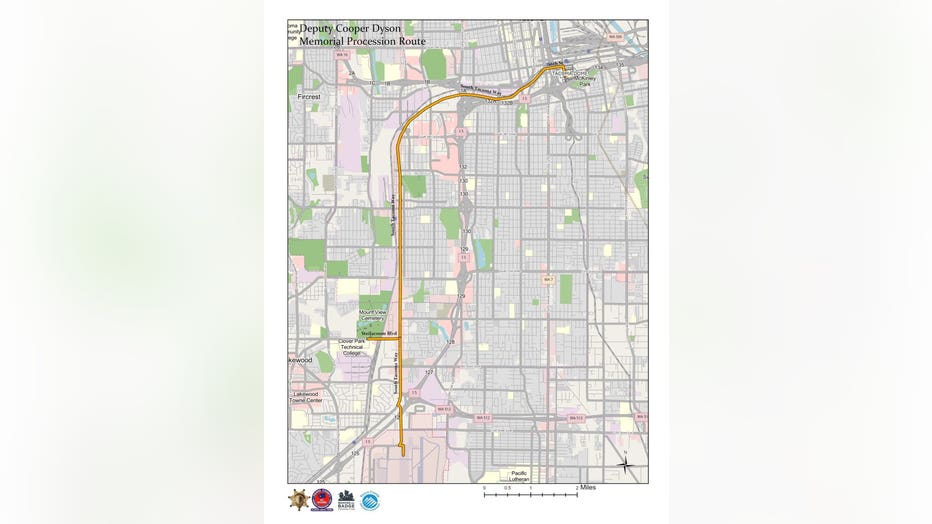 The procession route, according to the Pierce County Sheriff's Department.

The Pierce County Sheriff's Department said 25-year-old Deputy Cooper Dyson died while en route to assist two fellow officers already dispatched to a Parkland home. They had asked for back up after arriving to the initial call reporting a young child had been assaulted and there were weapons in the home. Dyson is survived by his 2-year-old child and his pregnant wife.