Ranger and Iggy are on patrol now after Ranger&nbsp;completed 400 hours of training to be certified by the Washington State Criminal Justice Training Commission.

DES MOINES, Wash. - "You can run but you can’t hide."  That’s the message from Des Moines Police Officer Doug Weable, the handler of K9 Ranger.

They are on patrol in Des Moines now after Ranger completed 400 hours of training to be certified by the Washington State Criminal Justice Training Commission. 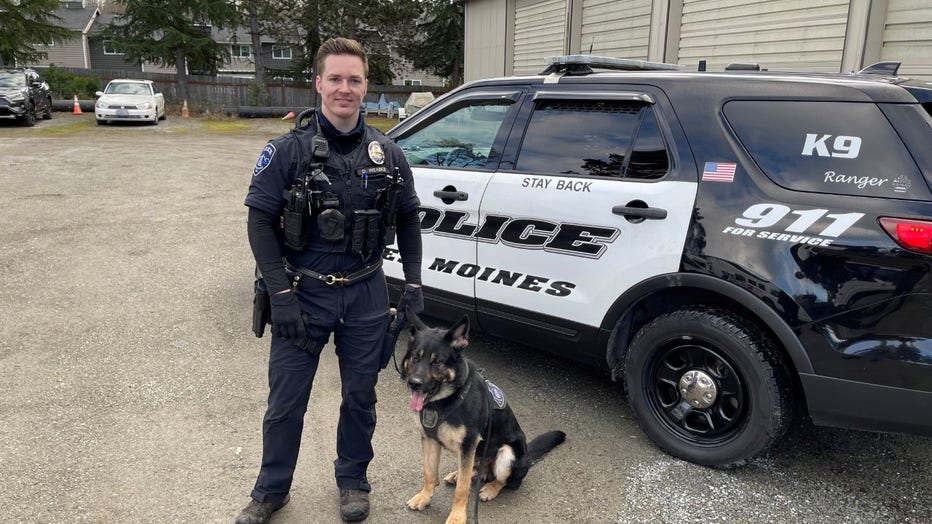 Previously, Des Moines Police had to call for assistance from K9s at other departments, which can create a delay in time-sensitive investigations.

"When a neighboring agency or the Des Moines Police Department needs a dog to track somebody that burglarized a business or committed a violent crime like robbery or something like that, we would track for that," said Officer Weable.

K9 Ranger can also find evidence like a handgun or a piece of clothing dropped by a suspect.

"You’re going after the most dangerous guys and you’re serving a purpose, apprehending those guys," said Officer Weable.

Iggy is a mix of Dutch Shepherd. and a Malinois. He has also completed hundreds of hours of training for certification and is accredited trough the Washington State Police K9 Association.

He’s been certified as a K9 handler for 13 years and worked with a bomb dog for the Baghdad embassy security force. He’s familiar with the dangers drugs like Fentanyl pose to his dog.

"We have a first aid kit ready for the K9 just in the event he ingests something that he should not. However, it is my job to try to prevent that from happening and be aware of what's in the car that he might get into," said Officer Hake.

There is a strong bond between the handlers and their K9’s.

"He lives with my family. He has his own room. He goes for walks and run with me. We go to the beach hiking and he likes a lot of belly rubs in between," said Officer Hake.  "On a personal note, I firmly believe that every police department should have a police K9. If it was possible to be feasible, I would probably have one on every shift. They’re a tremendous asset in helping law enforcement do their job."

The officers say both dogs are friendly and they looking forward to introducing them to the citizens of Des Moines.

"I am committed to using all resources possible to combat drug trafficking and to locate dangerous suspects as quickly as possible.  The addition of these two K9’s will enhance our ability to investigate crimes and to keep the community safe," said Des Moines PD Chief Ken Thomas.